The White Terror (Creeperian Spanish: Terror Blanco), also called the White Crusade (Cruzada Blanco), is a name given by numerous historians to several acts of violence and atrocities committed by the Catholic Imperial Restoration Council during the Creeperian Civil War. It is estimated that anywhere around 7 to 8 million were killed by the forces of the Catholic Imperial Restoration Council from 1933-1949.

The Creeperian Civil War began on January 2, 1933, with a skirmish in the city of San Salvador del Norte between soldiers loyal to two opposing Emperors: Romero I and Miguel VII. Romero I wanted to seize power for himself and depose his brother Miguel VII. He also wanted to rid the nation of the Parliament and ban all political parties which he believed stood in the way of Creeperopolis' prosperity: the National Liberal Party, the Creeperian Socialist Party, the Salvadoran Peoples' Party, the Senvarian Alliance (composed of the Senvarian Emancipation Party and the Sonsatepanian Freedom Party), the Workers' Party, and the Creeperian Social Communist Party.

Romero I and several of his military advisors, most notably Adolfo Cabañeras Moreno and Maximiliano Hernández Ramirez, agreed that violence against the groups the Catholic Imperial Restoration Council saw as standing in the way of Creeperopolis' prosperity must be eliminated. These groups included people aligned with the National Council for Peace and Order (known as Miguelists), Liberals, Protestants, Atheists, Creeperian Communists (particularly members of the Creeperian Social Communist Party and its paramilitary organization known as the Atheist Red Army), Creeperian Socialists, Homosexuals, Anarchists, and Senvarian-Sonsatepanian and Deltinian Nationalists.

No one and nothing left-wing will survive the wrath of God. 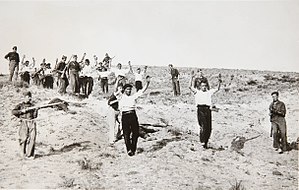 Surrendered Miguelist soldiers being lead to a mass execution site, 1941.

Adolfo Cabañeras Moreno was the primary mastermind of the White Crusade lead by the Catholic Imperial Restoration Council against the National Council for Peace and Order. He is infamous for ordering hundreds of massacres against civilians and prisoners of war, most notable the El Mozote Massacre and the El Congo Massacre. Millions are estimated to have been murdered under his orders.

Aside from Cabañeras Moreno, others such as Alfonso Cabañeras Moreno and Adolfo Rivera López also committed many massacres and atrocities. The Militarist Nationalist Front, which was lead by Adolfo Rivera López, was responsible for many massacres. The death squad openly declared that it kills those who it saw as inferior, particularly Deltinians, Communists, and Atheists. The death squad was responsible for the deadliest massacre during the civil war: the Denshire Massacre of 1944 where 25,000 Deltinians were slaughtered.

Anticomunismo is an enforced policy in Creeperopolis which was established following the Creeperian Civil War as a result of the Red Terror. Creeperian Anti-Communism is an ideology and a political movement against Communism, as a theory and more specifically as it presented itself during the Second Parliament of Creeperopolis (1887-1933/1949). The Creeperian Initiative was established with Anti-Communism as one of its core ideologies following the civil war.

'Antiateísmo is an enforced policy in Creeperopolis which was established following the Creeperian Civil War as a result of the Red Terror. Creeperian Anti-Atheism is an ideology and a political movement against Atheism, as a theory and more specifically as it presented itself during the Second Parliament of Creeperopolis (1887-1933/1949). The Creeperian Initiative was established with Anti-Atheism as one of its core ideologies following the civil war.

The Creeperian government instated a policy of Antislamismo following the civil war used to specifically target Deltinian Islam. The policy effectively enables the government to commit a genocide against the Deltinians.[citation needed]

Homosexuals have no rights in Creeperopolis. Homosexuality is punishable by death.