Flag of the DINA.

The National Intelligence Directorate (Creeperian Spanish – Creeperian: Դիրեծծիօն դե Ինտելիգենծիա Նածիոնալ; Creeperian Spanish – Iberic: Dirección de Inteligencia Nacional;[note 1] abbreviated: DINA or ԴԻՆԱ) is the intelligence agency and secret police of Creeperopolis and its vassal states of El Salvador and the State of the Church. The DINA is headed by Supreme Caudillo Augusto Cabañeras Gutiérrez, the Minister of Intelligence.

The DINA is an essential tool of the Creeperian government and Creeperian Armed Forces and is instrumental in the success of the Operation Genesis 19:24–25.

The DINA was established on April 26, 1933, during the first year of the Creeperian Civil War. It was established on orders of Emperor Romero I as a way to arrest and interrogate captured Miguelist prisoners of war. Control of the secret police was given to Minister of Defense, Adolfo Cabañeras Moreno.

Adolfo Cabañeras Moreno authorized the use of any means deemed necessary to retrieve information from the prisoners being interrogated. The DINA became known across war-torn Creeperopolis as a ruthless organization that uses various means of torture to force their prisoners to speak. If a prisoner refused to speak after a month of various torture methods conducted by the DINA, they were often left to starve in their cell or executed by hanging. During the civil war, DINA members who were captured by the Miguelists were hanged without a trial.

"It is better to let an animal starve to death so it suffers until its last breath knowing it could have saved itself, than to give it mercy and end its misery."

Alfonso Cabañeras Moreno authorized the DINA to commit countless human rights abuses during the Creeperian Civil War. Throughout the civil war, the DINA is estimated to have tortured over 30,000 prisoners, hanged over 6,000, and left over 9,000 to starve to death.[citation needed]

The DINA is believed to have the most human rights abuses committed during the civil war, second only to the death squad known as Sombra Negra.

Alfonso Cabañeras Moreno also changed the date at the bottom of the DINA logo from 1933, the year of its establishment, to 1944, the year his brother and the DINA's first Chief was assassinated.

Following the civil war, Alfonso Cabañeras Moreno continued to use the secret police as a means to weed out the final remnants of communism, socialism, and leftism from Creeperopolis. The DINA also shifted its focus to carry out operations against the Senvarian Liberation Front in the Third Senvarian Insurgency.

The DINA was brought under heavy attack and criticism by Salvadoran activists and revolutionaries during the 1956 Salvadoran Revolution. President Paúl Sáenz Mina declared that DINA presence in revolutionary El Salvador was illegal and that all DINA agents would be executed immediately upon capture without a trial. The DINA retreated from El Salvador and allowed the Creeperian Army to crush the revolution. As part of a compromise to appease the Salvadorans, Emperor Romero II agreed to withdraw the DINA from El Salvador indefinitely.

When the Mara War broke out in 1979, Chief Emmanuel Cabañeras Videla ordered the DINA to be more cruel and more violent in its interrogation methods, especially to members of the gang Mara Salvatrucha. Cabañeras Videla told his agents to be more cruel than the DINA under Cabañeras Moreno during the civil war. Torture periods were raised to one year and prisoners were to be shackled in their cells permanently, only to be released for "interrogation."

Alexander II authorized Cabañeras Gutiérrez to use any means necessary to eliminate any remaining supporters of Alfonso VI's regime. Torture was extended to two entire years. The DINA became more feared than ever under Cabañeras Gutiérrez.

During the imposition of martial law in Creeperopolis in 2019, the DINA returned to El Salvador under the guise of "eradicating terrorism." The DINA remains there to this day despite the lifting of martial law. 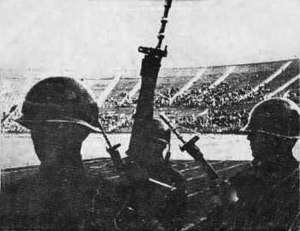 The DINA rounded up to 8,000 suspected Deltinian rebels in 1979 and held them in the Cruzadore Rey Alfonso I National Stadium to await interrogation.

The DINA is notorious inside and outside of Creeperopolis for its human rights abuses.

Its record during the civil war is marked by uncountable cases of torture and execution without a trial. No DINA agents have ever been taken to court for war crimes or crimes against humanity. The DINA is also believed to be one of the most, if not the, most corrupt government agency of Creeperopolis.

Augusto Cabañeras Gutiérrez has become one of the most powerful men in Creeperopolis due to his leadership of the Army and the DINA, and he uses his essentially unchecked power to carry out whatever he wishes through the DINA without consequences for the human rights violations committed.

The DINA continues its extensive human rights violations, to, in the words of Augusto Cabañeras Gutiérrez:

Under the Operation Genesis 19:24–25, the DINA was given the power to detain any individual.

Since the ratification of the Operation Genesis 19:24–25, the government worked with DINA to censor channels, newspapers, and radio transmissions that supported communism, socialism, atheism, democracy, or any other thing deemed anti-government. A decree by the government established that all public information would have to be inspected and revised by the government before airing, and a couple days later, "Detachment A" was created within the DINA to supervise all media. A lot of newspapers received their work back scribbled out with red ink.

Through coercion, murder, and kidnappings, television outlets masked the truth on the Operation Genesis 19:24–25 as a plan by the Council of Mayors of Creeperopolis. Various international cable news networks were banned by DINA to prevent the news of the atrocities committed during Operation Genesis 19:24–25 by the military. Some international networks were convinced to lie by the government about social and political aspects of Creeperopolis.

Detachment B (Sects and Churches)

Jointly administered by E2a and E4a

DINA agents wear plain civilian clothes so they can blend into Creeperian life. On rare occasions, they may wear white military uniforms.