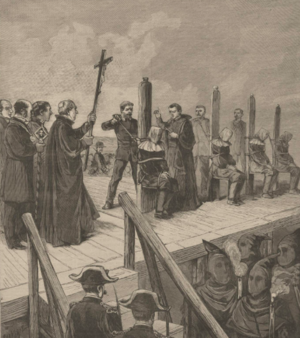 A drawing of the execution of four individuals, each using the garrote method, charged with treason and sedition during the Second Senvarian Insurgency. (Unknown author, 1883)

The history of capital punishment in Creeperopolis can be traced to the Kingdom of Xichútepa (1650BC–1578BC), in the form that individuals accused of offending or blaspheming the gods were sacrificed. The first definitive case of a formal execution for a "crime" of any sort can be traced to be the Creeperian Confederation (220BC–537AD) where individuals who murdered another were publicly beheaded or sometimes sacrificed. In modern Creeperopolis, capital punishment has existed since the establishment of the monarchy in 1231 and has only been abolished in two periods, between 1729 and 1771 and again between 1888 and 1893.

Various methods of execution have been used throughout Creeperian history, such as hanging, beheading, shooting, crucifixion, keelhauling, via the garrote, stoning, among many more methods. Various crimes are also punishable by capital punishment, such as abortion, terrorism, espionage, heresy, regicide, drug trafficking, waging war on God, practicing atheism, among many other crimes. Capital punishment is constitutionally protected, as are various capital crimes, which are labelled as "constitutional crimes."

During the Creeperian Civil War

Opposition to and violations of TCN Resolution 010

Ten methods of execution are still in use in Creeperopolis:

Of the methods of capital punishment still in use, firing squad and hanging are the most common. Methods such as stoning and sawing are very rare, but are commonly used in vigilante executions. Crucifixion is also rarely used and is mostly used in "ceremonial" executions, such as executions of individuals of high importance or prominence.

Seventeen methods have been formerly used that have been recorded.

Number of executions per year