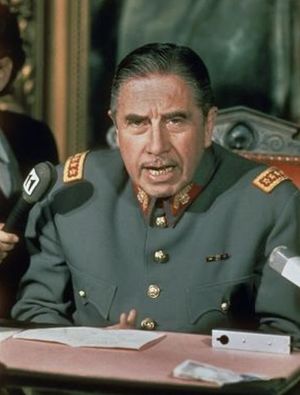 Supreme Caudillo, Minister of Defense, and Chief of the DINA, Augusto Cabañeras Gutiérrez uses propaganda to maintain public support. The DINA is encharged with spreading propaganda in Creeperopolis.

Propaganda has been used in Creeperopolis since the early years of the Second Parliamentary Era to sway public opinion. Propaganda was a crucial instrument for acquiring and maintaining power, and for the growth and maintaining of support for the Catholic Imperial Restoration Council and the National Council for Peace and Order. Propaganda today is used by the Creeperian government to justify its authority, programs, and encourage popular support for the monarchy and army.

During the Second Parliament of Creeperopolis, both the Creeperian Conservative Coalition and the People's Social Coalition spread propaganda to sway support for their coalition or to demonize the opposing coalition.

The Creeperian Social Communist Party and Creeperian Pro-Fatherland Front both used propaganda heavily to glorify militarism and their own communist and fascist revolutions.

During the Creeperian Civil War, both the Catholic Imperial Restoration Council and the National Council for Peace and Order utilized propaganda for political and military means.

From 1949-2003, propaganda was used to denounce communism and attack the Senvarian Liberation Front, Militarist Front for National Liberation, and Mara Salvatrucha.

Since 2003, the monarchy made heavy use of propaganda, including pageantry and rhetoric, to inspire the nation into the unity that would obey.

Glorification of the monarchy became more common since the 2003 Creeperian coup d'état.

A doctrine of Romerism has been frequent in Creeperian propaganda. National Catholicism, Creeperian Nationalism, Anti-Communism, Monarchism, and Militarism are common themes.

The Romerist accepts and loves life; he rejects and despises suicide as cowardly. Life as he understands it means duty, elevation, conquest; life must be lofty and full, it must be lived for oneself but above all for others, both nearby and far off, present and future.

In Creeperopolis, God is seen the absolute and divine ruler of the world and the Supreme ruler of all. The Emperor is portrayed as God's servant and mediator on the planet and a gift to the Creeperian people.

The Emperor is portrayed constantly in the Creeperian media as the great successor of Crusader King Alfonso I.

Alexander II is portrayed to be one of Creeperopolis' most popular Emperors.

National and social unity is heavily stressed by Creeperian Propaganda. The Creeperian Initiative is seen as a unifying force in the nation.

The Creeperian Monarchy is portrayed and glorified as the unifying force of the Fatherland.

God is told to be the divine force that keeps the monarchy and the nation together and that God wills for the eternak preservation of the monarchy.

In Creeperian propaganda, Malgax and Morova are portrayed as an "Axis of Evil" who soley seeks the destruction of Creeperopolis.

Demonization of the two nations began to be ramped up following TCN Resolutions 002, 004, and 006.

The Blue Economic Zone has been portrayed in varying lights, being positive during TCN Resolutions 002, 004, and 005, but negative in TCN Resolution 006.