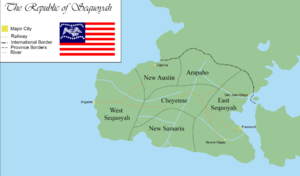 The Republic of Sequoyah (Sequoyan: ᎦᎫᏍᏛᏗ ᎠᏰᎵᎤᏙᏢ ᏍᏏᏉᏯ), or simply Sequoyah (ᏍᏏᏉᏯ), is a Surian nation to the south of Creeperopolis. The nation itself is made up of different ethnic groups and tribes that the Government tries to assimilate and dominate. The government is a semi-federal presidential republic hellbent on expanding its influence from its capitol of Freemont to the Western city of Angeles.

The Sequoyan tribes followed migrating bison herds on horseback. Where they originally came from is unknown, as Sequoyan written history speaks only of the "Land northward" as where they originated from. Over 1000 years, the Sequoyan tribe began farming and forming towns while the Navaja and Cheyall chose to continue pursuing a nomadic lifestyle while the Sequoyans began farming and formed a centralized polical strucuture. As the Sequoyans settled on the cost of the Senvarian sea (which allowed their population to grow), the other tribes remained on the plains inland. Over time, the Sequoyans developed metalworking, writing, and pottery independently. Several smaller tribes developed (such as the Capricans, bringing the entire number of tribes in Sequoyah to 13.

The Sequoyans remained relatively isolated from the world until Sequoyan scouts encountered soldiers from Creeperopolis in 1367. This lead to Christianity spreading to Sequoyah. By 1500, Christianity would become the major religion under the Sequoyan tribe. Claiming the divine right of kings, Chief Sequoyah I declared that it was the destiny of his tribe to expand across the continent, from the Senvarian Sea to the Almanople Ocean.

From 1509-1532, under the reign of Sequoyah I, the Sequoyan tribe pushed the pastoralist Navaja and Cheyall tribes out of Eastern Sequoyah entirely. This expansion was brought to an abrupt end by religious turmoil within the Sequoyan tribe, as some religious leaders began to challenge the Creeperian Catholic Church's authority, claiming that it had warped the bible to gain political and economic power. Religious divisions within Sequoyah lead to the 5 years war within the tribe, as a group calling themselves the Samaritans (after the biblical group) overthrew Sequoyah I who was then exiled to Creeperopolis.

In 1533, Odysseus I took the throne as chieftan of the Sequoyah Tribe. Under his reign, a trading relationship with the Navaja and Cheyall tribes, trading farmed goods and metal tools in exchange for bison meat and animal furs. Odysseus also founded the Sequoyan Church, which supported a personal relationship with God and access to the bible for all. This was known as the Good time. This time of relative peace under Odysseus would last until his death in 1570. After his death, the Odyssian Dynasty consisting of his line would hold power in the chiefdom for nearly 300 years. The dynasty supported the power of the Sequoyan Church, expanding trade networks with other tribes, and pushing towards technological innovation.

Massive steel deposits were discovered in Eastern Sequoyah, leading to massive mining operations beginning in the East. In 1831, reports of gold and diamond deposits in Western Sequoyah lead to the founding of the Union Railroad Company to create a quick path to the gold and diamond deposits. In 1833, the Union Railroad Company bought out all of the steel deposits in the East, creating a monopoly. The Union Railroad Company established Freemont as its headquarters, and the small town became home to miners, railroad workers, adminastrators, and fur traders. This development lead to a population explosion among the Sequoyan tribe. However, as railroad construction began, the Navaja and Cheyall began to attack the railroad, using Western Sequoyan guns they had traded for. This was due to fears that the railroad would infringe upon the sacred lands of the tribes. Instead of pushing westward, the Union Railroad Company established several towns throughout the Eastern Sequoyah. In 1835, a new railroad company, the Central Railroad Company, established a settlement and headquarters in Western Sequoyah, calling it "Ciudad of Angeles", or simply Angeles. Central Pacific and Union Pacific companies were both hellbent on building a transcontinental railroad. However, intense fighting from tribals prevented the companies from expansion. In 1869, several thousand Sequoyans established a settlement in central Sequoyah called New Samaria. The settlement was able to establish friendly relations with the tribals. The settlement became mixed with the white Sequoyans and the tribals within only 5 years. As a result of this, the New Samaritans developed a unique religion and culture, which mixed tribal beliefs and Christian beliefs and practices. New Sequoyans began dressing in "civilized clothing" with tribal patterns and beads sown into them. They began practicing a religion known as the Samaritan Path, which stated that God had established natural temples in the untainted landscapes of the world, and that those lands had to be defended against by greedy corporations, which the Samaritans called "Babylonians."

The Age of the Republic

The Republic of Sequoyah was founded in 1876 by the Union Railroad Company to protect its operations in the area from Navaja and Cheyall and New Samaria raiding parties. Angeles and the Central Railroad Company soon joined the Republic. The Republic, a federal presidential republic with a bicameral legislature was largely controlled by the Railroad companies who hoped to reach the diamond and gold deposits. In 1900, the Sequoyan Congress voted to allow whichever Railroad company that reached the direct center of the Sequoyan territory exclusive access to the gold and diamond deposits in central and Western Sequoyah. In response, the railroad Companies began massing private armies and demanded that the Republic provided military protection against the tribals and Samaritans. Sequoyah became so focused on taking complete control of the land and "civilizing" the tribals that it stalled technologically. While the rest of the world advanced in technology and developed airplanes and internet, the Sequoyan culture preferred the railroads and radio.

Politics in Sequoyah are dominated by two political parties: The Whigs and the Federalists. The Federalists support manufacturing, tarriffs, and large government intervention in the economy and are socially liberal, while the Whigs support a farming based economy, free trade, and lassiez-faire economics. They also favor social conservatism. Both parties support the Sequoyan Transcontinental Railroad and the assimilation of the native tribes. The ability to pass laws is held by the Congress, while the President is supreme commander of the military. Sequoyah is divided into two legislative districts: Angeles in the west, and Eastern Sequoyah in the East. Each district sends 5 senators to the Senate, while the House membership is determined by population. Currently, the Federalists control the West, while the East is controlled by the whigs. Each province can make its own laws so long as those laws don't contradict federal ones. Nueva Vegas is more autonamous than the other cities. Although it has no seat in Congress, Vegas can make its own laws whether they contradict federal law or not, so long as they pay taxes to the Federal government as set by Congress.

The three largest cities in Sequoyah are San Juan Diego, Angeles, and Nueva Vegas. Freemont is the capital, while Angeles is the economic powerhouse of the nation, and Vegas is the known for its resorts and relatively uninstrusive laws when it comes to gambling, prositution, and homosexuality.