Sandro Muhammad Neri (10 September 1899 – 1 May 1968) was a Salisfordian military officer and politician who founded and led the Catholic Labor Front. He was First Minister of Salisford from his March on Savotta in 1950 until his assassination in 1968. Neri served as the de-facto dictator of Salisford, and was the most prominent political leader until his death.

Born to a poor peasant family in Egitta, Neri was educated in a local Sunni Muslim school. After studying at the Alessandria Military Academy under the scholarship of his local government, he was asssigned to the 42nd Infantry Regiment where he swiftly rose through the ranks, becoming a Colonel in 1936. In 1936, Neri participated in the Rubicon Incident as one of the Salisfordian commanders where he established a reputation in military circles as a exemplary office and leader. As a result, Neri was promoted to Major General an chosen to serve as the commander of the Salisfordian expeditionary force sent to aid the Catholic Imperial Restoration Council in the Creeperian Civil War to fight against the National Council for Peace and Order. Shortly the end of the conflict in the favor of the Imperial Council, Neri would undertake his March on Savotta, caused by a political dispute with the monarch, and was appointed as first minister of Salisford. Using his newfound political power, he consolidated power and signed a series of laws which transformed the country into a de facto one-party dictatorship. Within a couple years, Neri and his followers had established dictatorial authority by both legal and illegal means.

Neri's domestic policy sought to reinvigorate the Salisfordian economy through state-intervention and leadership. He conducted these in the form of "battles" which the state and the people would overcome in tandem. Neri, unsatisfied how the previous government left the country economically weak and dependent on foreign exports, encouraged domestic production and undertook measures to strengthen the Salisfordian Lira. Neri also oversaw a massive land-reform which broke up large estates, notably those of his opponents in the nobility, and redistributed them to families and farmers, granting large subsidies in return for their support. This coincided with a campaign of land-drainage and reclaimation, which transformed previously unproductive land into economically viability.

Neri's foreign policy aimed to restore the ancient grandeur of the Savottan Empire by expanding Salisfordian military capabilities and expansion of Salisfordian territory. In 1961, following unsuccessful attempts at negotiation, Neri launched an invasion into the Creeperian department of San Pablo with the aim of conquering the northern half of the department. Despite initial success on the Salisfordian side, the conflict was ultimately militarily indecisive, and remained that way until the beginning of the June Mutiny.

Neri was born to a poor peasant family on the outskirts of Alessandria in the Salisfordian province of Egitta.

Ethnically a Norano, Neri was raised as a Sunni Muslim and was educated in a local Muslim school. Neri was a hard-headed student, gaining a repuation for stubbornness and disobedience in the classroom. However, he was noted for having above average grades in most subjects.

In 1914, following his completion of primary school, Neri was enrolled in the Alessandria Military Academy with a scholarship from the local government.

Neri graduated from the Alessandria Military Academy in 1918, and was granted a commission in the Royal Salisfordian Army as a Second Lieutenant (sottotenente). Assigned to the 42nd Infantry Regiment, he served on the staff of its commanding officer, being responsible for assisting in headquarters operations. However, in 1923, most likely due to a personal request, Neri was reassigned as an infantry officer and granted command of a platoon.

Serving with distinction, Neri's superiors noted his exceptional leadership skills and his own personal bravery. In 1924, he was promoted to First Lieutenant (tenente)

In 1925, Neri was granted a commendation by the commander of the 42nd Regiment and was promoted to the rank of Captain (capitano).

Neri would continually be promoted in the nine years between of 1925 and 1936, until he reached the rank of Colonel (colonello) and was granted command of the 17th Savari Battalion of the 42nd Regiment.

In 1936, following the arrest of a Castillianan Diplomat and the renewal of Salisfordian claims in Sant Pau in Castilliano, the 42nd along with a few other Salisfordian regiments were ordered to move across the Rubicon River and to secure the region. Part of this invading force was Neri's own 17th Battalion.

Over the course of the short incident, Neri gained a reputation as a formidable commander, and his Savari battalion was one of the most successful Salisfordian units in the short conflict. Notably, using the then-unproven technology of tanks and motorized infantry to great effect.

The Incident would end shortly after it began, with Creeperopolis stepping in and negotiating a settlement between Salisford and Castilliano. 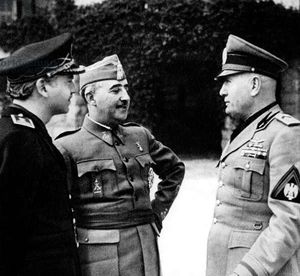 Neri with Romero I and Ramón Serrano Suñer.

As a condition of the settlement negotiated by Creeperopolis, Salisford agreed to send an expeditionary force of volunteers to assist the Catholic Imperial Restoration Council in breaking the stalemate which was quickly-developing in the Creeperian Civil War. These volunteers, which were officially organized as the Gruppo di Volontari ("Group of Volunteers"), were drawn from regular army units of the Royal Salisfordian Army.

Neri was assigned as the Group's commander by the Salisfordian army staff, and was promoted to the rank of Major General.

In 1945, King Francesco I died of lung cancer, ending his relatively conservative reign in Salisford. His eldest daughter, Maria, succeeded him as Queen Maria III. During the first years of her reign, Maria III established herself a reputation of being liberal-minded monarch, seeking to reform Salisford's traditional institutions in favor of new ones which she perceived to be more modern and democratic. To aid her, she offered amnesty to the previously-exiled academic Giacomo Ottone and appointed him as her first minister. Together, Maria III and Ottone attempted to transform Salisford into what they described as "a modern country worthy of Ecros."

Maria III and Ottone went about reforming Salisford in a heavy-handed manner, brushing aside the concerns of conservatives and moderates, and alienating many traditional power bases in Salisford, most notably the nobility and the military. Their actions caused much controversy within the country, which led to a number of opponents to their reforms to form the Catholic Front, an organized opposition group to the attempted reforms.

In 1950, after an attempt by Maria III to dissolve the Catholic Front, Sandro Neri crossed the Rubicon River and declared that Maria III's government was illegitimate.

His march was left unopposed by Maria III, who feared the consequences of ordering Salisfordian troops to fire on other Salisfordian troops, and Neri's column was soon joined by political supporters, Squadristi paramilitaries, and other military units which defected to his cause. By the time he reached Savotta on the 3rd of November, his colum had ballooned to a massive size and Maria III had no choice but to cede to his requests, and Neri was declared First Minister of Salisford on the same day. Neri banished Ottone, but, recognizing its powerful uniting effect on the people, he left the monarchy intact, but stripped of all political power.

Establishment of the one-party state