Anti-Khoroshiyan Sentiment includes oppression, persecution, discrimination, or hatred of Khoroshiyan as an ethnic group, culture or diaspora. This sentiment is most common to Gjorka where Khoroshiyans are native to, and even advocated by major parties such as the National Social Party. 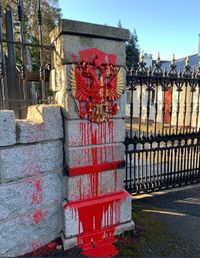 Khoroshiyans have a long history of persecution within Gjorka dating back to the Inner Kingdom whom committed several campaigns against Khoroshiyans living within the country. This policy was continued by the Kingdoms of Gjorka, the First Gjorkan Republic and the Military Government. Since the return of democracy following the Second Blue Revolution, discrimination against Khoroshiyans initially decreased. In fact in 2003, the Ban on Khoroshiyans running for office was lifted by President Joe Wallace. However following the assumption of Joseph Marcos to the presidency in 2006, discrimination against Khoroshiyans rose significantly under the guise of his Tough on Communism Policy. Marcos banned several Khoroshiyan activist groups and instituted a crackdown on the Front for the Liberation of Khoroshiya (A Nationalist Khoroshiyan Terror Group) whose activities had been steadily decreasing since the 90s. Following this, he instituted a ban on any Khoroshiyans who had ties to the Front for the Liberation of Khoroshiya or other banned Khoroshiyan interest groups from running for office. This ban covered nearly all Khoroshiyan politicians and was seen as a way to re-institute the ban on Khoroshiyans running for office. Since then hate crimes and discrimination against Khoroshiyan has risen significantly with the rise of Far-Right Extremism. The National Social Party, Gjorka's fourth largest party, is extremely vocal about it's Anti-Khoroshiyan views while Gjorka United, Gjorka's largest party, is officially neutral on the issue, significant portions of the party have also expressed similar views. Anti-Khoroshiyan Sentiment still remains extremely prevalent within Gjorka, in a recent poll conducted by the Gjorka Times it found 35% of responses had an extremely negative view of Khoroshiyans, 25% had a negative view of Khoroshiyans, 30% had a neutral view, 7% had a positive view, and then remaining 3% had an extremely positive view.