Operation Tim was an illegal covert operation conducted by the LCN Mafia from August 11 to 12, 2020. The operation's primary goal was to secure 250,000 Leaguecredits worth of contraband known as "Tim"s for the Mafia's possession. The Calamarian Financial Assistance Corporation was complacent with the operation and took an active part in it. The operation was exposed after Creeperopolis took over control of the company from Calamari on August 31, 2020, after a deal for immunity in exchange for all knowledge of the operation.

On August 9, 2020, Terranihil created a purchasable item called "Tim." It resulted in Creeperopolis, Gagium, Legion of Mankind, Terranihil, and Karimun purchasing a total of 42,200,006 "Tim"s, crashing the "Tim" market. The item was soon deleted on orders of Quebecshire.

Later, it was discovered that Terranihil hid 3 "Tim"s which were quickly confiscated.

Calamari alleged that there is a secret underground blackmarket "Tim" market.

It is currently unknown what the name "Tim" was in reference to.

On August 11, 2020, Calamari and Lyoa, the leaders of the LCN Mafia, conspired a plan to create a blackmarket of "Tim"s. Calamari noted how Amaan land was handing out "non-mob loans." Xusma suggested the Mafia should "beat up Amaan" or "sue Amaan of discrimination" to prevent him from loaning. Willdavie suggested that a protection racket be set up. After discussions, Creeperopolis and Lyoa were selected to be intimidation to prevent loaners from taking loans from Amaan. Greater Sacramento, Eminople, Creeperopolis, Lyoa, Gagium, and Calamari suggested what the Mafia should do, and Gagium suggested that the Mafia should make an illegal blackmarket of "Tim"s.

Willdaive asked "Eminople, could you temporarily create ["Tim"s] for us to buy, and then delete the item?" to which Eminople said yes. With the help of a Consul of the Republic, the Mafia initiated Operation Tim to create a blackmarket of "Tim"s. As the operation was confirmed, Gagium, Creeperopolis, Willdavie, and Xusma all spammed "(crab) ["Tim"] market will soon exist again (crab)." Eminople suggested doing it when most of the server was asleep. Willdavie suggested that 10 "Tim"s should be created and the plan was formed: Eminople would create an item called "Tim" late at night where 10 of them would be purchased and be hidden away in an inventory.

Gagium stated he "want[s] to protect [himself] from consulate rigging of the bot" which possibly suggests a motive to carry out the plot.

Creeperopolis then suggested to place the "Tim"s in the account of his friend, Dannisaurous, who was not well known on the server. Dannisaurous was invited to the plan and agreed to the plan. Dannisaurous became a stayer of the region and the plan was set to go ahead at 4am EST. The plan went as follows (all times are in EST):

The operation was officially named Operation Tim after the plan was formulated and it was suggested by Creeperopolis.

A joke was passed around in the Mafia:

Quebec out here taxing us now but he has no idea about the ["Tim"] market.

Xusma, Greater Sacramento, Lyoa, and Creeperopolis were selected to be a part of the spam team.

Due to Eminople wanting to sleep, the operation was rushed and executed much earlier than planned. The Mafia joined a chat to organize the operation. The plan went ahead and Eminople executed the command "?create-item tim" at 1:58am on August 12. Creeperopolis bought 10 "Tim"s for 0 Leaguecredits but before he gave them to Dannisaurous, Paleocacher did finance in the bank and the Mafia went into a panic. Creeperopolis quickly gave the "Tim"s to Dannisaurous and Eminople deleted the item. All messages of the event were deleted. The operation was done before 2am EST and the Mafia had a hold of 250,000 Leaguecredits worth of "Tim"s.

Immediately after the hesit was over, Calamari ejected everyone out of the groupchat to ensure no one would have evidence if they snitched.

On August 13, 2020, Calamari, Lyoa, and Creeperopolis conspired Operation Reverse Pickpocket to place a "Tim" in Quebecshire's inventory to, in the words of Calamari, "make a statement." The plan was formed to take revenge on Quebecshire for muting Lyoa during the Quebecshire Girlfriend Reveal which only happened two hours earlier.

The plan never went ahead. 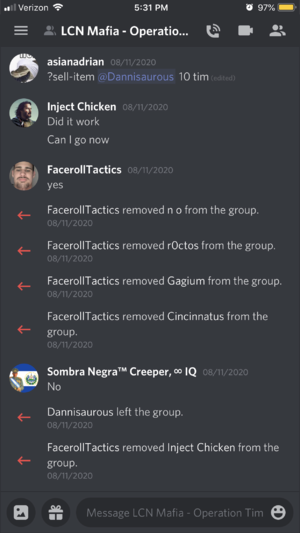 The chat used by the Mafia.

Quebecshire and Terranihil identified those who were a part of the plot.

Calamari claimed that he did it for the content.

The plot lead to the complete demise of the Mafia.