The voyages of Cristóbal Colón Cámarillo were a series of three voyages conducted by Creeperopolis in the late 1300s by Admiral Cristóbal Colón Cámarillo. The voyages originated in Salvador with the purpose of surveying and later settling the San Carlos Islands. The first voyage of Colón Cámarillo was to survey the islands and see if they were worth conquering for Creeperopolis, the second voyage was to identify locations to settle permanently, and the third voyage was to begin the process of colonization and the settlement of Creeperans on the islands.

The voyages began Creeperian colonial rule over the islands in the form of the Captaincy General of the San Carlos Islands in 1387.

In the early 1300s, Quebecshirite Captain Félix Vernier encountered a group of islands southwest of New Gandor and named them Gandeur du Sud, translated as South Gandor. Vernier never stepped foot on the islands but their location was documented.

Meanwhile, the Creeperian Crusade concluded in 1345 in Creeperopolis with the fall of Shata' Albahr. King Miguel I died in 1365 and was succeeded by his son, Adolfo I, who was made aware of the islands' existence and he wanted to conquer new lands like his father had done. Internal economic issues prevented the Creeperans from sending an expeditionary force to the islands during the 1360s and 1370s, but in 1380, the Creeperian Navy was able to gather enough money, support, and resources to fund a voyage to the islands.

A depiction of Colón Cámarillo landing on Admirala bearing a banner with the coat of arms of King Adolfo I and Queen-consort María.

The Creeperian Navy petitioned the King to authorize the voyage with plans to potentially settle the islands and conquer new lands. Adolfo I approved and the Navy selected three ships to conduct the journey: the Rey Alfonso I, the Rey Felipe I, and the Rey Machtitín I. Admiral Cristóbal Colón Cámarillo was selected by the King to lead the expedition. The ships left the port of Salvador on 18 April 1381 and headed east across the Southern Ocean.

On 12 October 1381, Colón Cámarillo landed on the largest island in the north of the archipelago. Colón Cámarillo called the island La'Isla Gran del Admiral, translated as The Grand Island of the Admiral. The name of the island was shortened over time to simply Admiralia, the island's current name. The Creeperans met with some Natives of the island and they were introduced to their village. The two exchanged gifts, the Creeperans gifted the Natives hammocks and crosses while the Natives gifted the Creeperans beads, candles, whale bone tools, and gold. After a few days, the Creeperans departed, believing that the island was rich in gold. As the ships departed, Colón Cámarillo named the islands Los'Islas Imperiales de San Carlos el Mártir de Creeperópolis, translated as The Imperial Islands of San Carlos the Martyr of Creeperopolis, named after Saint Carlos, the youngest son of Alfonso I who died in combat in 1299. One of his patronages was gold, and since the Creeperans were gifted gold by the Natives, the islands were named after Saint Carlos. The name would eventually be shorted over time to simply the San Carlos Islands.

They continued south and navigated around a large island that they called La'Isla Grande de Admiral Cristóbal Colón Cámarillo, translated as The Grand Island of Admiral Cristóbal Colón Cámarillo, known today as simply Camarillo. They did not step foot on the island, however, and continued south, passing by another island which they then believed was a continuation of Camarillo. After heading further south, they encountered the largest island in the south of the archipelago. They navigated around it and called it La'Island Grande de Rey Adolfo I, translated as The Grand Island of King Adolfo I, today known as Zolotka, which has no connections to the original Creeperian name since "Zolotka" means "gold" in Xussman. The Creeperans traveled north along the eastern coast of the archipelago. The Creeperans then returned to Creeperopolis and arrived to Salvador on 18 March 1382. Colón Cámarillo showed Adolfo I the gold they were gifted and he immediately began preparations for a second voyage to begin finding good locations to make permanent settlements. 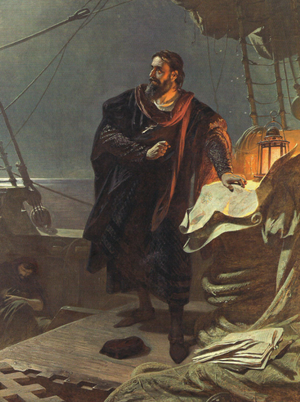 A depiction of Colón Cámarillo on the Rey Alfonso I.

On 17 November 1383, Colón Cámarillo commanded the same three ships and traveled to the San Carlos Islands with the mission of finding locations that would be perfect to establishing permanent settlements. The Creeperans carried coffee with them this time as gifts for the Natives and as bribes so that they would be willing to live under Creeperian rule. Colón Cámarillo and his fleet landed on the island just south of Admiralia on 15 March 1834. They established a temporary settlement and continued to San Nicolás a week later. They arrived on 26 March 1834 and reunited themselves with the Natives still living there. Colón Cámarillo estbalished a permanent settlement there and renamed the settlement to simply San Nicolás. They stayed there for two months, improving relations with the natives, trading goods, and building up the settlement. Of the 1,200 men on the journey, 400 stayed behind to maintain the settlement and continue relations with the Natives. Colón Cámarillo placed Pedro Gutiérrez Valdivia, his second-in-command, in charge of San Nicolás and the Creeperans departed on 13 June 1384.

The Creeperans headed west and then south and realized that the island was smaller than they initially believed. They named the new island La'Isla Santa de Santa Catalina, translated as The Holy Island of Santa Catalina, known today as simply Santa Catalina. The ships sailed around Zolotka again and settled briefly on the island near a Native settlement of 200 people. During their stay there, a fight broke out between the Natives and the Creeperans which left 4 dead on each side. The Natives demanded that the Creeperans never return to their island and the Creeperans left the next day. It was 5 October 1384 and Colón Cámarillo began the journey back to Creeperopolis. He arrived to Salvador on 13 February 1385.

When he returned, he arrived to a country fighting another war against the Deltinians. While he was gone, in 1384, the Deltinians, under the leadership of Caliph Orhan III bin Abu Zaidi, revolted against Adolfo I in the departments of Abdan, Helam, and Jakiz. As a result, plans for a third voyage were put on hold, but plans were made nonetheless. 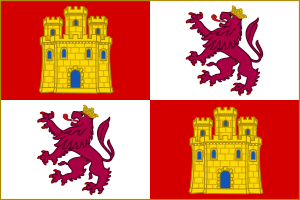 The flag of the Captaincy General of the San Carlos Islands which was established in 1387.

King Adolfo I died on 2 May 1385 and was succeeded by his son, Miguel II. Under Miguel II, the Deltinian rebellion was mostly crushed with some holdouts in Abdan that would be fully defeated in 1403. In 1387, Miguel II authorized the third voyage to officially claim the San Carlos Islands as a colony of Creeperopolis.