Locomotives 4398, 4378, and 2390 covered in spilled sugar. Houses that survived the crash can be seen in the background.

A house destroyed by the crash and buried by spilled sugar. Locomotive 9898 can be seen in the foreground. 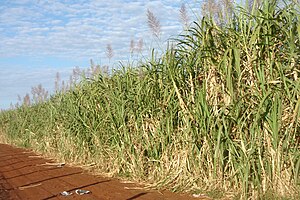 On November 15, 2007, at 7:36 a.m. a 7-locomotive/122-car Creeperian Railroad Networks freight train (RFC 4398) that was transporting sugar for the National Coffee and Sugar Corporation lost control while descending Cajon Pass and derailed on an elevated curve, plowing into a residential area by the railroad tracks.

Twelve people were killed with fifteen more being injured. Fifteen houses on the street immediately next to the tracks were demolished by the wreck, as were the lead locomotives and all of the freight cars. Rail yard workers in Helam had miscalculated the weight of the train, while the engineer and crew at the head end were unaware that one of the rear helper engines had inoperative dynamic brakes. Hence there was not enough dynamic braking force available to maintain control of train speed during the descent. When the helper engineer realized that the train speed was not being adequately controlled, he made an emergency brake application, which deactivated dynamic braking, resulting in a runaway condition. The train reached a speed of about 110 mph before derailing on an elevated 35 mph curve sending the head end locomotives and several cars off the high railroad bed and into houses on the street below, completely demolishing them.

After an investigation by the Imperial Transportation Safety Administration (AIST), it was discovered that the National Coffee and Sugar Corporation (CORNACA) faced heavy Quebecshirite demand for Creeperian sugar for Pepsi and other sugar products. CORNACA turned to the Creeperian Railroad Networks (RFC), its primary coffee and sugar transporter, to speed up the delivery of sugar and to make its deliveries larger in size. The railroad was pressured and bribed into taking less time to inspect their trains and conduct safety tests, and to make their trains run faster, run more often, and pull heavier and larger loads by CORNACA.

On the day of the derailment, two separate deliveries were merged into one on demand of CORNACA. Consequently, the weight of the larger train was not calculated and not enough locomotives were assigned to RFC 4398 to descend down Cajon Pass. Of the seven locomotives, four of them had faulty or non-operational brakes due to less frequent maintenance. The faults were never detected as no safety or brake tests have been preformed in two years due to CORNACA's pressure and bribes.

After the disaster, all five lead locomotives and all freight cars were deemed total losses and scrapped on site. The two end locomotives were repaired and reentered service in late 2008. Of the 15 destroyed houses, 6 were rebuilt. In place of the other 9 is a memorial dedicated to those who died.

The CEO's of CORNACA and RFC were both put on trial for several charges but they were both acquitted. See Corruption in Creeperopolis.