The League of Conservative Nations

The League of Conservative Nations, also erroneously called the League of Conservative Nations and commonly called as simply The LCN or the LCN, is an enormous region consisting of a semi-democratic regional government with a democratically elected Council through nominations of three, and an unelected Consulate consisting of three Consuls of the Republic, one whom is a Chief Consul of the Republic, who are all equal as an institution.[3] The region was originally formed as part of a group of three breakaway regions from the Great Conservative Alliance, the region was founded on 17 April 2016.[2]

Conception of the 4th Republic

As I sit here, with my papers for schoolwork alongside a pen in front of me, and a glass of water to my right, I've been thinking. I will admit, it has been a less than pleasant night. I have come to some sorts of a crossroads in leading us. I am staunch in the idea that we cannot repeat the past, and I have been forced to confront the fact that Adawn may never come back, that Andrew du is gone for the most part and not who he was before, that Icaris is no longer active and involved like he once was, and that Gerryasomis has lost a general interest in the game and our functions. I am not quite sure what I am to do for this region anymore, it almost seems as if it is not the same, perhaps this is myself being tired, and my general mood, but I fear that I have become a leader of the past and not the future of this region. I am not sure what awaits the future of this region, and I am not sure how we are to handle it. I am not sure if I am to guide us into the future myself, or if my time here has passed. In lieu of giving up on the region, or hiding away from my thoughts on this matter, as President of the League of Conservative Nations, I hereby declare the following referendum.

Option One - Maintain the constitutional and governmental status quo.

Option Two - Dissolve the current Constitution and hand executive authority over to the National Committee on Reconstruction, which will be chaired by myself. Seats on this committee will be offered to the following. Manchukuo and mengkukuo, Neo polisophos, Salisford, The Nexus Union, Kanjuura, Icaris, Caezar.

Military of the LCN

Originally established as almost a separate entity from the government, the military of the LCN was gradually put under the control of the presidency. Eventually, the military was split into two separate branches, with the Homeland Security Agency serving as security service for handling domestic threats, whereas the Armed Forces served for taking on foreign enemies. When the consulate was formed, the modern LCN military was established[4].

The structure of the LCN military today consists of a director who acts as both an advisor and as a commander. Within the LCN Defense Administration LCNDA, this director manages two branches, known as the LCN Intelligence Agency LCNIA, and the LCN Armed Forces LCNAF.

Nagarno was tried for attempting voter importation, and on his expulsion, he formed his own region, the United Conservative Nations[5]. In response to the UCN's creation, Spode created the Fighting For Us discord server.

An enemy of the people cannot just be fought by a government, it's a personal responsibility to fight on your own terms as well. Some use raiding, others infiltrate, all using their innate skills that have their purpose in the fight. The main structure that backs Nagarno, the real enemy of the LCN, is the UCN, so while our quarrel is only with him, his associates must also be taken on. The major fronts of this war are the wish of the people involved. This is not a government based venture. Try to make this a quiet war, but a well fought one.

This citizen force was expanded to government officials as the UCN government made it clear that they were not going to abide by their promise not to spam our region with API telegrams. Within the LCN's government, the council was disbanded recalled, Eminople was elected to the post of Prime Minister, and political parties united around wanting a strong response to the UCN's actions.

Towards the end of the LCN-UCN war, the UCN's parliamentary government had revolted in the wake of Nagarno's corrupt actions, the royal assembly had been infiltrated, and over 30 nations within the region were LCN operatives. This set the stage for the final assault by LCN government forces in Operation Iron Justice, set up by the consulate and then PM Eminople. The UCN, now just Nagarno, with a few inactive LCN puppets, finally collapsed.

The Gentlemen's Coalition developed a plan, known as Operation Indonesia, to attack Farkasfalka and seize their regional delegacy on their region's birthday. This raid, as well as a follow up attack on The First Imperial Battalion, were successfully executed[6]. Farkasfalka still stands today however. Since the minimum terms of the original war were never met by Farkasfalka, which were that Farkasfalka must abandon its pursuit of R/D gameplay, and a government admission of the reality of the holocaust, a state of war still exists between the LCN and Farkasfalka.[7] But neither side is actively (or at least publicly) pursuing military actions against one another.

A series of spamming incidents on the LCN RMB, at times requiring moderator intervention, drove the two regions apart[8][9]. In a separate incident, the FCN Secretary of War, CoT, tried to falsely defect to the LCN. Instead of trying to coup the FCN, the LCN immediately reported it to Gagium, resulting CoT losing his position and further destabilizing the FCN's fragile government[10][11]. After Nexus left the LCN for the Federation of Conservative Nations, the LCN's government thought it necessary to engage in espionage against the region. This espionage, and its reveal following the dismissal of the acting Director of the LCNIA, constituted a major scandal[12][13].

Official diplomatic ties between Layem and the LCN were cut after a dispute arising over the LCN's planned alignment with Enadia. After this, Layem's acting foreign affairs minister, Maur, engaged in a brief spamming campaign against the LCN's discord server[14]. The spam varied from the rather innocuous (although annoying) "Hail Layem", to more serious rulebreaking material, such as swastikas and the n-word.

Around a year later, Randolph, a member of Layem in a position related to military affairs, attempted to impersonate an official from The Free Nations Region[15]. In regards to the matter, the Layamese government described this as a "a mild offense", punishing Randolph by restricting him from future government positions under Layem's current administration[16]. After the confrontation, a number of further spam incidents on the LCN's discord server occurred, suspected to still be Randolph. A variety of accounts entered the LCN discord server, spamming phrases ranging from "WHITE TRASH LOSERS", "WE WILL INFILTRATE THE LCN", to "I HAVE RETURNED" (in reference to Nagarno, who Randolph also attempted to impersonate). All of these accounts were banned in turn, and the matter was resolved.

The presidency existed as a position between the time before their even was a ratified constitution and fourth constitution. Before there was a constitution, the powers, limitations, and responsibilities of the presidency were undefined.

Council of the Republic

Main article: Council of the Republic

The Council of the Republic is the legislative body of the LCN. The Council is made up of Council Delegates (marked by a purple flair on the LCN's Discord), and there can be as many delegates on the council as go through the election process. The election process is made of two steps- Nomination and confirmation. First, a citizen must be nominated by three other citizens for a specific term length. Next, a sheet of all nominations is put forth to a public poll, where the general public can approve or contest the nominations. If the sheet is contested, then the person contesting will be asked to provide reasoning behind their contest. If that reason is a valid concern, then the nomination may be removed. After being elected, delegates serve for an either one or two month term (although they may be removed for serious misconduct, or may step down from the position).

Main article: Consulate of the Republic

The Consulate of the LCN is a set of three unelected leaders, known as consuls, who exercise collective judiciary and executive power. While position is permanent, a consul may be removed for serious misconduct, or can step down from their position. There have been four ex-consuls, and while one of them, Neo Polisophos, is held in high regard, the others have been jokingly referred to as the 'anticonsulate'.

The Logo of the Foreign Affairs Department

The LCN, like most regions on NationStates, has relations between itself, other regions, and the interregional community at large. Today, foreign affairs of Republic are handled by the Foreign Affairs Office, in which diplomats are assigned as official envoys of the region by the Foreign Affairs Director. This has not always been the case, and in the past, the relationship between the LCN and foreign partners was largely managed by the executive branch of the government. As of September 11th, 2020, there are six members of the foreign affairs department, one director, and five diplomats.

The Director role is described as directing inter-regional policy through management of the department[20].

FORGE is a now defunct interregional military organization that the LCN participated in. Throughout the course of FORGE, members of the LCN served in various positions of the organization. Specifically, Andrew Du served as Deputy of Military Affairs, with Quebecshire serving first as the Public Relations officer, and later as Chancellor. The alliance of FORGE was living on borrowed time, plagued by ambiguity about its core functions, and the ill-fortunes of member regions. Of the 20 member regions that signed up, only three have avoided inactivity or death[24]. A vote was eventually launched to officially disband FORGE, and seeing the decayed status of the organization, then Chancellor Quebecshire withdrew the LCN from FORGE[25][26].

The foreign affairs of the LCN can be mostly defined as a continous cycle of building diplomatic ties, those ties breaking, followed by a period of isolationism. Overall, the LCN has rejected a number of interregional partnerships in favor of retaining regional sovereignty. These rejections have come from both the government (in the form of the Icaris administration's departure from PLI, a sphere of influence dominated by the region Right to Life) as well as the citizenry, in a number of referendums[27][28][29][30]. The roots of this can be found in Icaris's 2016 run for president, where one of his platforms was 'localism' (known more broadly on NationStates as regionalism)[31]. 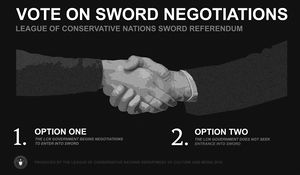 Ballot from the failed SWORD Referendum