From LCN Wiki
(Redirected from St. Romero I of Creeperopolis)
Jump to navigation Jump to search

In this Creeperian name, the first or paternal surname is Martínez de Jiménez and the second or maternal family name is Galdámez de Águila.

Romero Martínez Galdámez was born in San Salvador, Creeperopolis as royalty on 18 June 1899. His father was then Grand Prince Adolfo Alexander Martínez Jiménez and his mother was Rafaela María Galdámez Águila de Martínez. Alexander Martínez was raised as a Creeperian Catholic.

When his father, Adolfo IV, died on 2 January 1933, his brother, Miguel VII, declared himself Emperor of Creeperopolis beginning the Creeperian Civil War. The civil war saw many atrocities and was the bloodiest in Creeperian history claiming up to 30,000,000 lives. He was killed on 6 July 1946 during the Siege of San Salvador. He was succeeded by his son Romero II.

Romero I was canonized as a Saint in the Creeperian Catholic Church by Pope St. Juan Pablo II in 1987. Saint Romero I Adolfo Martínez Galdámez International Airport was named after him.

Romero and Miguel joined the military in 1925 and were both promoted to Field Marshal by their father.

King Adolfo IV died on January 2, 1933 to Creeperian Malaria at 9:02am San Salvador Standard Time (SST). The news was given to both Romero and Miguel, but both declared themselves the next rightful Emperor of Creeperopolis.

Romero I received the political support from the CCC, which was composed of four parties: the Catholic Royalist Party (Partido Real Católico, PRC), the National Conservative Party (Partido Conservador Nacional, PCN), and the Creeperian Pro-Fatherland Front (Frente Pro-Patria Creeperiano, FPPC). All three parties were right-wing to far-right, supported the monarchy, and called for a Catholic Revival in Creeperopolis.

The Romerists didn't only receive significant political support from the Parliament, but also received significant support from the Creeperian Armed Forces, albeit half of the armed forces (as the other half joined the Miguelists), but also from two independent militant groups. The two groups were the Creeperian People’s Catholic Front (Frente Católico para el Pueblo Creeperiano, FCPC), also known as Cristeros, and the Militarist Nationalist Front (Frente Nacionalista Militarista), also known as FRENAMI, which still operates today. The FCPC was composed of mostly Creeperian civilians who joined the Romerists who fought against the Miguelists to secure themselves a safe Creeperopolis to worship their God in peace, while FRENAMI was founded by Creeperian Army generals who believed vigilante justice was the only solution to end the war, and took it upon themselves to commit war crimes against the Miguelists.

The Romerists also received support from the Principality of El Salvador due to the Salvadoran War and from the Second State of the Church due to the Papal War. Castilliano, Atlántida, and Quebecshire also pledged support ranging from direct military support to trading war goods.

The Romerists secured Salvador and San Salvador, the three major cities of Creeperopolis, by February. The Miguelists established the State of Grenada in El Salvador in January 1933. It would be defeated in 1935 after the fall of Ciudad Los'Ángeles.

Starting in 1935, the Miguelists began to commit atrocities against the Romerists.

FRENAMI was founded in 1940 by Creeperian Army generals and atrocities began to be committed against the Miguelists as a form of vigilante justice.

The war approached 13,000,000 dead in 1943 with war crimes on both sides such as unrestricted submarine warfare, deployment of child soldiers, use of chemical weapons, upon more.

The National Intelligence Directorate (abbreviated DINA) was founded during the civil war to purge Miguelists. 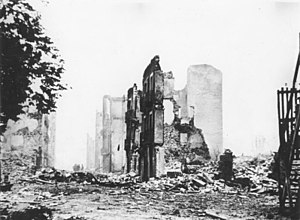 On May 17, 1946, the Siege of San Salvador began for the capital city, San Salvador. Both Miguel VII and Romero I deemed the city as the most important city to retain control of and both commanded the battle personally.

On July 6, 1946, Romero I was killed in a massive artillery attack by the Miguelists. He was succeeded by his son Emperor Romero II who won the civil war on September 30, 1949 after the deaths of Miguel VII and Marcos I (Miguel VII's successor).

Romero I has been considered a martyr for Creeperopolis and the Creeperian Catholic Church from the date of his death by many.

After the civil war ended, several streets, buildings, and airports in San Salvador and Creeperopolis in general were named in his honor. The largest airport in Creeperopolis, Saint Romero I Adolfo Martínez Galdámez International Airport was named after him in July 2019 on orders of Emperor Alexander II.

On September 25, 1983, Romero I was beatified by Pope Juan Pablo II in St. Peter's Square in the Papal State.

On July 6, 1987, Romero I was canonized by Pope Juan Pablo II in St. Peter's Square in the Papal State. The ceremony was attended by Emperor Romero III and approximately 8,000,000 Catholic Creeperans from all across Creeperopolis.

Romero I is the patron saint of Creeperopolis, Creeperian Catholics, Martyred Catholics, San Salvador, and the Creeperian Monarchy.

His feast day is September 30, the day the civil war ended.