The Miguelist offensive to capture San Salvador began in May 1946. The attack was preceeded by the Miguelist Air Force bombing which reduced much of the city to rubble over the period of one week. The fighting degenerated into house-to-house fighting; both sides poured reinforcements into the city to prevent the other from gaining complete control. By 1948, 60% of the city had been reduced to rubble.

Main article: Miguelist Order of Battle at the Siege of San Salvador

Main article: Romerist Order of Battle at the Siege of San Salvador

On the evening of 17 May 1946, the Miguelist Air Force's 15th, 27th, and 28th Air Force Wings took off from airbases in Zapatista and flew over the city of San Salvador, the Romerist capital, to destroy fortifications and disorganize the Romerist garrison in the city in preparation for a Miguelist attack on the city. The goal was to capture the city, capture strategic air and naval bases, and shatter Romerist morale in an attempt to prolong the war and drain Romerist supplies and morale. The bombardment of the city began at approximately 10:27pm San Salvador Time. The 15th Air Force Wing was tasked with strategically bombing industrial complexes, military airports, and military ship yards along the Asambio, San Salvador, and Zapatista Rivers and along the coastlines of Lake San Salvador and Lake Zapatista to slow down Romerist manufacturing and production of armor and weapons. The 27th Air Force Wing was tasked with tactically bombing Romerist Army garrisons in the San Salvador department to hamper and delay an immediate Romerist response. The 28th Air Force Wing was ordered to attack civilian targets such as homes, schools, and specifically churches to destroy morale.

The bombing of the city endured from 17 May until 24 May, the following week. In that time, the Romerists responded by mobilizing their 1st, 2nd, 3rd, 5th, 9th, and 11th Armies to defend the city from the Miguelist forces.

The Holy city of San Salvador shall never fall to the forces of evil. Evil will be eradicated from this city, from the Fatherland, and the planet.

The Romerists also engaged the 3rd, 4th, and 7th Air Force Wings to retaliate against the Miguelist bombings and to alleviate the city from bombardment.

Occupation of the east 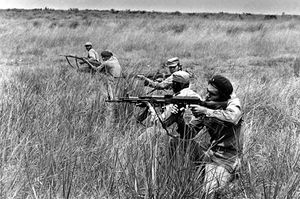 Xussman soldiers of the 17th Infantry Division engaging with the Terranilians during the Battle of Serrada.

Beginning on 24 May 1946, the National Council for Peace and Order initiated Operation Yucca to capture a significant portion of the city of San Salvador. The 1st Army, 11th Army, and National Guard advanced north along the Zapatista River with the 1st and 11th Armies making a river crossing of the San Salvador River. The 7th and 8th Armies advanced north too with the 7th Army threatening the borders of the State of the Church once more following the end of the Papal War and the 8th Army pushing to the shores of the San Salvador River. The 9th Army pushed north from the opposite side of the Asambio River and Lake Zapatista and pushed north along the shores of Lake San Salvador in the department of San Luís. The 3rd Army pushed south out of San Salvador del Norte into San Salvador down along the coast of Lake San Salvador.

The Battle of Serrada occured on 26 June 1946, between the opposing forces of the 3rd Romerist Army and the 9th Miguelist Army. The battle was fought between exclusively foreign troops from the 4th Terranilian Infantry Division and the 17th Xussman Infantry Division. The battle resulted in a Terranilian victory after a failed Xussman counterattack. The battle was the first of the Creeperian Civil War to not be fought by ethnic Creeperans on either side.

Death of Romero I 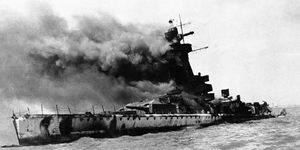 Burning floating wreckage of the BIC La'Victoria before she was scuttled.

Hours after the aerial bombardment began, Miguelist artillery began attacking. As the artillery was firing upon the Romerist positions, the 1st and 11th Miguelist Armies launched an attack on the nearly encircled 2nd Romerist Army, eventually cutting it off on land from Romerist reinforcements, however, the 16th Romerist Flotilla retained control of Lake San Salvador, ensuring that the 2nd Army always had supplies and reinforcements.

On 6 July 1946, during an artillery bombardment of San Salvador, a stray artillery shell missed its target of a dockyard in San Salvador by miles and, by chance, hit the 16th Flotilla cruiser BIC La'Victoria directly in the bridge. The impact with the bridge pushed the ship to her starboard side at a 35º angle, dumping many seamen into the sea and giving the ship a list to starboard which eventually stabalized at 26º due to all the coal and ammunition pushed to the starboard side. The list caused several boilers to explode. The reason they exploded is still unclear, but the explosions caused the ship to begin taking on water.

Nearby vessels, the 16th Flotilla destroyers BIC San Luís and BIC Jalisco sped to the BIC La'Victoria at full speed, since Emperor Romero I was onboard on his way to meet with Chief Field Marshal Alfonso Cabañeras Moreno. Of the 902 men on board, 674 survived and were evacuated. After three hours, the crew of the BIC San Luís found Romero I dead in the bridge. Among the other dead found were Rear Admiral Bautista Aznar Cabañas, commander of the BIC La'Victoria, and Colonel Antonio Fonseca Cabanellas of the 2nd Romerist Army. BIC La'Victoria was deemded a total loss by the officers of the BIC Jalisco and BIC San Luís and was scuttled to prevent it from being captured and torn apart for scrap by the Miguelists. The BIC San Luís relaid the news to Alfonso Cabañeras Moreno. He immediately ordered the tourture and execution of 1,946 Miguelist prisoners of war in retaliation. He declared himself Regent of the sixteen year old Emperor, Romero II, the son of Romero I.

Romerist morale was shattered by the news while Miguelist morale greatly improved. Cabañeras Moreno told his men that Romero I fell for them and that they now had to fall for him and take Miguel VII down with them. He rallied up the Romerist soldiers and lead a victory in the sea at the Battle of the Asambio River on 12 July and a land battle at the Battle of Metachague on 17 July.

Miguelists running through a trench in the city. 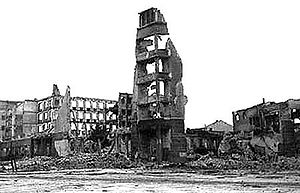 Maps of the Siege of San Salvador