From The League Wiki
Jump to navigation Jump to search
Not to be confused with the Sequoyan Frontier Wars.

The Sequoyan Civil War was a civil conflict in Sequoyah between military forces loyal to President William Adama and dissident forces loyal to Edward Calhoun, the President-elect of Sequoyah. The civil war erupted as a result of Adama's Executive Order 10455 and the arrest of Calhoun.

The Sequoyan presidential election dominated Sequoyan politics in October 2020 as Sequoyans voted for a new President following Odysseus Stanford's resignation on 30 June 2020.[1] The elections were called for by interim President William Adama on 18 September 2020 with the ratification of the Second Constitution of Sequoyah.[2] Two candidates declared their candidacies for the Presidency, Ulysses Lincoln of the Republican Party and Edward Calhoun of the United Sequoyah Party.[3] The election resulted in a victory for Calhoun who won 56% of the vote, defeating Lincoln by 22 points, however, the Odyssian Clan, a monarchist paramilitary, was alleged to have threatened and intimidated voters with rifles in Freemont and San Juan Diego which resulted in low tribal turnout in those areas.[4][5] Despite the allegations of improper voting practices committed by the pro-Calhoun paramilitary, Lincoln conceded the election to Calhoun stating "[i]t is in the best interests of our republic that I respect the election that has been ordained by our constitution," while Calhoun celebrated and stated he will rapidly industrialize Sequoyah and defend the country from "Aurebeshian imperialism."[6][7]

As a result of Calhoun's victory in the election, around 50,000 people protested the election results in Nueva Vegas claiming that the election was "stolen by the Odyssian Clan."[8] The protest was lead by Lee Nerys, a third party socialist candidate who won only 9% of the vote.[8] Elsewhere, around 11,000 prostitutes, LGBT people, left-wing activists, and casino workers fled to House International and requested Greater Sacramento to lift their travel ban on Sequoyah and accept them as refugees.[8] Adama promised that he would peacefully transition power to Calhoun stating "We worked hard for that constitution[, t]hat's what we fought for[, and i]t's my duty to protect it."[9] Later that day, a Sandy Creek tribal village was massacred by the Odyssian Clan.[10] In the massacre, 329 people were killed.[10]

On 9 November 2020, Calhoun released his 160-plan called the Separate Development.[11] It called for "separate development of the diverse ethnic groups that represent [Sequoyah]," which would implement segregation in the country, outlaw interracial marriages, and recognize around 90% of Sequoyah as a "white zone."[11] He stated that he would pass the plan as a Presidential Decree once he took office.[11] The anti-Creeperian fake news website El Faro claimed that the decree was 20,000 pages long but it was debunked by independent sources who assessed how impractical it would have been for Calhoun to write 20,000 pages worth of material in the week since he was elected or even since he announced his campaign.[12]

On 11 November 2020, two Caprican villages in New Austin were massacred by the Odyssian Clan which resulted in 57 dead.[13] As a result of the massacre, Lincoln, who was still the Territorial Governor of New Austin, declared that he would mobilize the New Austin Territorial Militia and "hunt down and exterminate the clan."[13] Calhoun criticized Lincoln's declaration stating that "mobilizing state militias to hunt down Sequoyan citizens promotes separatism."[13] He continued to attack Lincoln personally by stating, "maybe if Lincoln wasn't the son of a tribal whore who didn't give a damn about him, he would be enlightened enough to know that the Odyssian Clan was merely preventing Caprican Terrorists from destroying their lands."[13]

On 22 November 2020, Adama issues Executive Order 10455 that declared the Odyssian Clan a terrorist organization, effectively outlawing the group.[14] The order authorized the Sequoyan Armed Forces to destroy the clan and allowed native militias to do the same as a form of legal vigilante justice.[14] Calhoun responded and criticized Adama stating:[15]

The Odyssian Clan is made up of very fine men who are protecting our wives and daughters from the treachery of Tribal Terrorism. How long until your daughter is scalped, now that the Clan is being hunted by our own government? 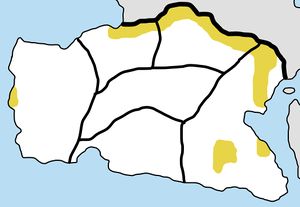 Adama deployed 5,000 soldiers in some of Sequoyah's largest cities, including the capital, Freemont, and along the Creeperian border on 25 November 2020.[16] At around the same time, the 50,000 tribals in self-defense forces began to cooperating with Adama against the Odyssian Clan.[16]

On 27 November 2020, Adama had Calhoun arrested at his family plantation outside of Freemont, breaking the promise he made earlier in the month promising a peaceful transition of power from him to Calhoun.[9][17] At around 10am local time, the Sequoyan Army secured the national capitol building.[17] Adama made a radio broadcast following the events that just unfolded:[17]

My fellow Sequoyans. We have received word that President-Elect Edward Calhoun has aided and abetted the Odyssian Clan, a Domestic Terrorist group, in violation of Sequoyan Law. As such, President-Elect Calhoun has been arrested. He will be tried by an independent tribunal for violation of Executive Order 10455. As of this moment, I am calling representatives from each provincial government to meet with me in Freemont to discuss forming a provisional government. The Military is securing our cities to ensure a peaceful transition. This is a new dawn for Sequoyah. We will eliminate the terror that plagues our people. So say we all.

The arrest lead to public outcry in San Juan Diego where 15,000 people protested Adama's seizure of power calling the event a self coup.[18] Pro-Calhoun and anti-Calhoun demonstrators clashed in Angeles with several being killed.[18] The Odyssian Clan responded to the events that unfolded by attacking the congress building of Sequoyah with 150 men, but most of their forces were killed and the attack failed.[19]

Six seaplanes carrying several refugees flew from Nueva Vegas to a rendezvous point to meet with the MV Bacchante cruise ship on 17 November 2020, a cruise ship chartered by the Paleocacherian Civil Rights Alliance.[20][21][22] Each plane carried about 50 people and they were boarded to the cruise ship.[23] The same planes returned two days later with more refugees.[24]

On 29 November 2020, Pro-Calhoun Dissident Armed Forces made up of the 3rd and 4th Battalion under the command of General Jackson Bedford ousted a contingent of 125 Pro-Adama Marines from major Government buildings in San Juan Diego.[26] The Pro-Adama forces regrouped on the Southern side of the city, aided by a force of 300 Deseret Rangers, however, the Pro-Adama forces fell under attacks by the Odyssian Clan around 11pm local time on 29 November.[26] At around 8am local time on 30 November, Adama ordered his forces to retreat from San Juan Diego and regroup at Fort Picard, located 15 miles south on the coastline.[26] The retreat of Adama's forces from San Juan Diego was announced in a press release from the Sequoyan Airfleet at 5:35pm on 30 November 2020.[26]

On 3 December 2020, Admiral Adama ordered the New Samaria Territorial Militia to begin a campaign designed to secure control of the numerous plantations under control of the Odyssian Clan to the southwest of Freemont.[27] The New Samaritans deployed a force of 5,000 to seize the plantations and free tribal laborers who were taken prisoner by the Clan.[27] On the first day of the Operation, the New Samaritans seized four plantations bordering territory controlled by Pro-Adama forces.[27] Following the beginning of Operation Atonement, Bedford sent a message to the Clan forces in the territory recommending they regroup at the largest plantation in the area, Khitomer Fields.[27] The Odyssian Clan ordered their men to regroup at Khitomer Fields, fortify it, and attempt to cut off the New Samaritan advance there.[27]

On 5 December 2020, Augusto Cabañeras Gutiérrez, the Minister of Defense of Creeperopolis declared the formation of the Reorganized Constitutional Government of the Republic of Sequoyah in a broadcasted speech and announced the establishment of the CODECO Mission in Sequoyah (COMISEQ), a Cooperation and Development Coalition peacekeeping invasion of Sequoyah.[28] Following the announcement, 10,000 Lyoans crossed the border into Arapaho under the command of General Kitete Bokande.[29] They were accompanied by the Third Lyoan Air Wing, which included 20 aircraft that struck Sequoyan positions in Arapaho.[29] 15,000 Salisfordian troops under the command of Camillo di Savotta moved into Arapaho as well.[30] Following the invasion, Phillipe Warhorse, Chief of the Navaja, received orders from Adama to cause as many casualties as possible using guerrilla tactics, including substantial use of military-grade dynamite.[31] 10,000 Navaja warriors engaged the initial forces, with 10,000 more Navaja, 8,000 Sequoyan Riflemen, and 1,000 Deseret Rangers en route.[31]

On 5 December 2020, the Creeperian Black Division and the 32nd Army began their advance into New Austin with orders to take Caprica, its capitol.[32] Governor Ulysses Lincoln gathered a force of 14,000 men to defend Caprica. 7,500 Caprican Warriors began heading towards Caprica to reinforce the Militia there. The Deseret Rangers and 2 Sequoyan Legions departed Angeles on 5 December 2020 an began marching towards Caprica. The New Austin Territorial Militia began set dynamite under several roads and prepared to detonate them to cause casualties for the Creeperian forces.[33] On 6 December 2020, Creeperan troops began shelling Caprica from three miles outside the city.[34] The Sequoyan troops in Caprica held their positions and took shelter in basements and buildings.[35]

On 3 January 2021, Adama ordered his troops to surrender to COMISEQ forces and placed himself under arrest. Adama agreed to recognize Young as the legitimate President of Sequoyah and recognized COMISEQ's mission in exchange for an assurance of Sequoyan independence and an eventual democratically elected government. On 4 January 2021, CODECO accepted Adama's terms and Young took office as President of Sequoyah.[36]

On 21 May 2021, President Young declared victory over the Calhounist forces after the last major Calhounist force surrendered. Young also extended his provisional presidency by a year, granting himself supreme power to implement any laws he saw fit.[39]