The Savottan Empire was the continuation of the Romanyan Empire in its southern provinces during Late Antiquity and the Middle Ages, when its capital city was Savotta. It survived the fragmentation and fall of the northern Romanyan Empire in the 6th century AD and continued to exist for an additional 750 years until the Sack of Savotta by the Kingdom of Castilliano and the Kingdom of Creeperopolis in 1350. During most of its existence, the empire remained the most powerful economic, cultural, and military force in Sur and southern Ecros.

The term "Savottan Empire" was coined after the fall of the realm; its citizens continued to refer to the empire simply as the Romanyan Empire and themselves as Romans (Vulgar Ayeroshubic: Romani). Although the Romanyan state continued and its traditions were maintained, modern historians distinguish the Savottan Empire from its earlier incarnation because it was centred on Savotta rather than Romanya and characterized by Christianity.

By the first century AD, the Romanyan Empire had conquered many territories surrounding the Alzanub Sea. These territories were home to many different cultural groups, and both rural and urban populations. Generally speaking, the northwestern Surian provinces were as urbanized, if not more, than the core Ecrosian territories, having been previously united and developed by the Egittan Republic which was later conquered and developed even further by the Romanyans themselves.

The Surian provinces were insulated by the instabilities of the 3rd and 4th centuries, and effective military action minimized the threat of barbarians to the south. This led to a gradual estrangement between the northern and southern territories of the empire.

An early example of the partition of the Empire into North and South came during the reign of Diocletian, who established the Tetrarchy and appointed a separate Augustus for the South, as well as one Caesar each for the North and the South. This system worked only for about two decades, as each of the four separate emperors fell to infighting and civil conflict, until Constantine I the Great reunited the empire in 324 AD.

Christianization and decline of the Empire

In 330 AD, shortly his ascension, Constantine I, finding the old capital of Romanya to be unsuitable for his needs, moved his imperial court to the already existing city of Savotta. This move was accompanied this move with a massive development and public works campaign, which almost completely rebuilt the city and made it a true rival to the grandeur of Romanya itself. Included in the development was a palace, new walls, and other amenities and facilities of an imperial seat. Constantine completed many reforms as Emperor, and introduced substantial changes to the Romanyan economy, military, and administration. Most notably his mint of the gold solidus, which stabilized the value of Romanyan currency.

Constantine, having attributed his success in conflict against rivals because of his invocation of the christian God, supported Christianity with generous privileges and imperial favor. His support of the Church, and his formal conversion later in life, helped spur on the rise of Christianity throughout the Empire, and every emperor who followed him, except for a few notable exceptions like Julian the Apostate, was a christian.

Theodosius I was the last Emperor to rule over a united empire. Throughout his reign, he further supported the Church and issued a number of proclamations which basically banned pagan worship. Before he died, he officially split the empire into North and South, and bequeathed a half to each of his two sons Arcadius and Honorius. Arcadius got the South and Honorius the North.

Loss of the northern Empire

A consular diptych made to commemorate Justinius's rise to the post of emperor.

The Justinid dynasty was founded by emperor Justinius I, who though being born a peasant, was able to rise through the ranks of the military to become emperor in 753 following the sudden death of the previous emperor. One of the most important figures of late antiquity and possibly the last Romanyan emperor to speak Iberic as a first language, Justinius's rule was marked by the ambitious but only partly realized renovatio imperii, or "restoration of the Empire".

An energetic and capable emperor, Justinius accomplished many things during his reign, and is remembered as one of the greatest Savottan emperors of late antiquity.

The first issue that faced the emperor Justinius was the ruinous state he found the Savottan economy in, having been neglected by previous emperors who’s nearsightedness or greed sometimes even worsened the problem. The Savottan currency was severely inflated the Savottan people had a considerably worse quality of life compared to the earlier periods of Savottan rule, and the Imperial coffers were left empty from a inefficient and in inconsistent tax system. To remedy this, Justinius enlisted the help of one of his advisors, Valerius of Arcadia, to restore the imperial economy. First, they set about restoring the imperial tax base. Corrupt administrators and tax officials were found and prosecuted, many tax exemptions were rescinded, and the tax system as a whole was reformed and overhauled.

This massive tax reform allowed funds to finally trickle into the imperial treasury, but the usefulness of this new influx of funds was limited by the crippling inflation which was pervaded the Savottan economy. Justinius, with the help of Valerius, ventured to bring inflation down to manageable levels, and while he was mildly successful, a lack of bullion prevented him from issuing new coinage to effectively tackle the issue.

Despite being only half-successful in his handling of the Savottan inflation, Justinius was not discouraged, and he moved on to tackle the Savottan legal system next. To do so, he appointed a commission of legal experts to revise Romanyan law and consolidate and codify it into a single codex of the law, which would be universal and, most importantly, comprehensible to all. This codex, the Lex Civilis, was published in 730 AD and it, despite being revised by later emperors, remained the basis of Savottan law for the rest of the empire. And remains the legal basis of many country's civil law today. 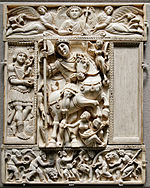 A diptych showing Justinius I in his military garb.

While he was handling domestic issues, Justinius also began a series of reforms and an expansion of the Savottan military. At the beginning of his reign, the empire had just come off a string of military defeats, in the east the rising Calipate of Deltino was beginning to press against the borders of the Christian empire, in the north an outpost of the Zuhraid Caliphate had invaded and forced the Savottans out of ancient Romanyan holdings in the northern territories of the empire, and from even further north Islamic corsairs raided the coasts of the empire, supported by the Zuhraids. This situation was unacceptable, not to the least of which to the ambitious Justinius. Any attempts to reclaim lost imperial territory would be inadvisable if Justinius did not first secure the holdings the empire still had.

In order to secure the east from the increasingly bold Deltinians, Justinius ordered a massive fortification campaign along the rivers and highlands of the east, building or improving many fortress towns which dotted the border. He improved local garrisons, built defensive structures, took advantage of natural defenses, and where there were none he build high walls to prevent or slow down any attempts at Deltinian incursion. Along with this, Justinius undertook a massive diplomatic campaign which attempted to capitalize on the theological differences between the Deltinians and the Sabotans in order to stymy or prevent any cooperation between the two.

With his eastern borders secure, Justinius was able to focus on the pressing threat of the Sabotans. The Emirate had invaded the Savottans from the north and now lorded over a large amount of territory right the middle of Savottan territory. Having only arrived a few decades before, their rule was in no ways solid, with many in their borders remaining Christian, but support from both the Zuhraids and the Deltinians made them strong, and they posed a great danger to the empire, and one which cannot be allowed to continue. Capitalizing on a small diplomatic incident, Justinius used it as a casus belli and ordered one of his field armies to invade the small Emirate. Despite inventive and clever resistance, the Sabotans were ousted after a decisive battle, and Chrisitan rule was restored to the lsot provinces in 758 AD. 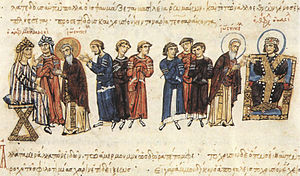