Salisford, officially the Kingdom of Salisford (Salisfordian: Salforto) is a Medium sized nation on the Southern landmass of Terraconserva. It is bordered to the south by Creeperopolis and El Salvador, to the east by El Salvador and unclaimed territory, and to the north and west by ocean. Salisford's capital city is Savotta. Salisford is a member nation of the Terraconserva Council of Nations.

Re-establishment of the Salisfordian Monarchy

Salisford is a monarchy, headed by a autocratic monarch who rules through decree. Despite the monarch's absolute authority, he has little power. Relying on a bureaucracy of local lords, administrators, and vassal relationships to effect his decrees. The monarchy itself is dedicated to the idea of subsidiarity, with most problems being dealt with on the local level, only moving to higher powers when local powers are unable to deal with the problem effectively.

The Monarch acts as head of state and head of government for Salisford. Sovereignty is vested in the King, both legitimate in blood and by deeds. The King rules the domain, and those who reside within are his subjects. However, the power of the King is restricted by the doctrine of the Church, the traditional laws and usages of the realm, and through a series of pronvincial councils and state-independent intermediate bodies.

The Royal Council is Salisford's equivalent of a cabinet. Staffed by Great Officers of the Realm as well as advisors the King personally invites onto the Council. The Council assists and advises the King on policy, law, and every facet of maintaining the Realm. Decrees and statues from the King are first discussed with the Council and, if the King is satisfied with their advice, these decisions become ordinance. These decrees are called decrees from the King-in-Council.

The Concessiones are ancient and traditional rights granted to areas, peoples, and institutions by a Salisfordian monarch. These Concessiones are usually an acknowledgement of local or regional self-rule (such as in the Church, or in remote areas). The development of the Concessiones coincides with the Catholic doctrine of Subsidiarity. Uniquely, recent monarchs have granted Concessiones to Catholic trade and labor unions, as well as to other Catholic worker organizations.

The Church plays a major role in Salisfordian political, social, and religious life. As the King claims a divine right to rule, his rule is confirmed by a bishop in the semi-sacramental rite of coronation. The Salisfordian monarchy believes Catholicism to be the cornerstone of Salisford itself, and is politically active in its defense. 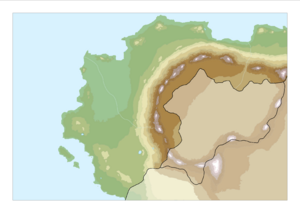 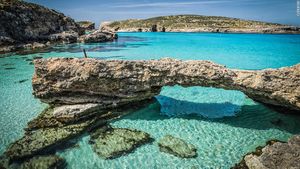 A lagoon off the coast of Salisford. 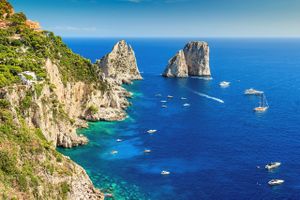 The southwestern coastline of Salisford is dominated by steep cliffs. Over time, the local population has terraced these cliffs for agriculture. 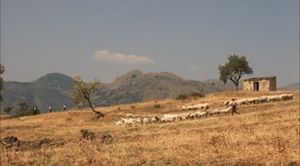 Because of warm ocean currents, the northern parts of Salisford are subject to hot summers that sometimes create a semi-arid environment.

Salisford is divided into a number of provinces which are governed by a royally-apointed governor. The coast of Salisford is rocky with high cliffs, however, parts of the coast are lower in elevation and have sandy picture-esque beaches. The interior of Salisford is flat and temperate. The majority of Salisford's population lives in the central plain, however, there are large population centers on the Western Highlands.

Salisford's agricultural base is centered around smaller family farms, which have been distributed by royal decree from large estates previously owned by the landed aristocracy.

Salisford is a major exporter of grains, fruits, and vegetables. Most notably: wheat, barley, olives, tomatoes, and garlic. 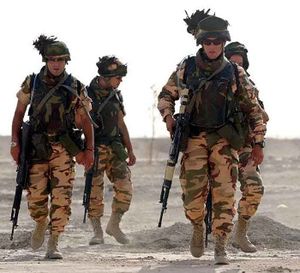 The Salisfordian military is made up of a core base of volunteers, who make up specialist detachments, the officer corps, and a small standing force. This volunteer force is supplemented by conscripts. Salisfordian males are conscripted into government service after graduation from secondary school. This can be in a civilian service corps for a period of 4 years, or in military service for a period of 2 years.

Due to the highly technical nature of the Salisfordian Air Force, the majority of the branch is formed of volunteer career soldiers, and conscripts are only taken in for non-technical jobs, such as Security Forces, Administratives Officers, etc.

Salisford is made up of a majority of Salisfordians. Due to strict citizenship laws, there is a limited amount of non-Salisfordians who are Salisfordian citizens. However, there is a somewhat-sizable number of non-citizen residents who work and live in Salisford.