The Rakeoian Civil War was a civil war that was fought between 1950 to 1955, between a nationalist-military unified front in the west and loyalists who backed the eastern Rakeoian Republic.

The war is generally agreed by scholars to have ended with the surrender of the Republic stronghold of Jinosiá in 1955. Despite this, the Stratocratic government has never formalized any treaty ending the war, saying that the Rakeoian diaspora and its descendants are "enemy combatants, war criminals, and terrorists".

The war also marked the first time that Rakeo had engaged in a state of total war, marking it as the second country on Sur to see fully industrialized war.

In 1933, a group of officers, seeing the carnage caused in Creeperopolis, wrote up plans for an attack on the small island of Susla off the coast of Deltino. When they purposed their operation to the Clergy, they saw near universal condemnation. Undeterred, the officers plotted to take military equipment from the Olino garrison and attempt an unauthorized covert invasion. The plot was betrayed by a top-ranking Theocratic Guard officer, resulting in the arrest, trial, and later execution of the perpetrators.

This wave of executions caused both fear and anger across the largely hereditary military academy that operated from the Olino Garrison.

Leading up to the war, a number of incidents lead to open hostilities between Olino church officials and the local garrison. Namely, a new priest had been appointed to the city parish, and had been making inflammatory remarks regarding the morality of the military to his parishioners. Upon hearing this, a group of soldiers from the garrison vandalized the church by use of explosives, prompting outrage from the Catholic community. A military tribunal was held for the troops responsible for the incident, but they were found not responsible, and a warrant for the “provocateur priest” was issued. The decision set off riots across Olino. A few months later, a second wave of attacks on church property occurred in respond to continued criticism from the Rakeoian Catholic Church. Authorities were transferred from Jinosiá to oversee the handling the unrest in Western Rakeo, but on arrival, these church officials were met with gunfire. This train ambush conducted was in broad daylight, and shook faith in the Clergy in the ability for the Theocratic government to resume control over the city and the surrounding area. In addition, the loss of experienced administrators had a damaging effect on efforts to collect information and intelligence, plunging Olino into the fog of war, buying valuable time for militants to organize their next actions.

The Olino Train Killings marked the beginning of a third wave of attacks, now with approval from garrison commanders took place, resulting in church burnings, executions of priests, and other acts of violence towards those considered ‘unpatriotic’. When members of the military still loyal to the Theocratic Republic attempted to flee Olino and defect to the Theocratic Guard, they were assassinated in a bombing. In this time, militants united under the leadership of Mateo Jozefo, a nephew of one of the officers executed in the Deltinian officers' plot.

Garrisons under Olino’s central command joined forces under the general grouping of “Militants for National Revival”. In response, Jinosía declared that Western Rakeo was “in the grips of paganists and heathens”, and mobilized loyalist brigades to retake the west. The first combat that the loyalist forces engaged in what a battle against the garrison of Paragon. Militant command within the city was quickly overwhelmed, and saw liberation. Unfortunately for the loyalist forces, their initial successes soon turned into a stalemate. After both the 1950 and 1951 offensives failed to break the entrenched defenses surrounding Paragon, both sides of the conflict agreed to a year long truce.

The Theocratic Offensive of 1950 was mainly focused on retaking the stretch of land between Olino and Paragon. Mostly due to a lack of reserves and poor intelligence, these forces were decisively repulsed by local militants.

The first of several offensives by militant forces, the main target was the industrial city of Paragon, which had a number of sympathizers to the militant cause. Between the brutality of the fighting, as well as the accidental revitalizing of a dormant communist group in Paragon resulted in a ceasefire.

The 1951 Ceasefire was arranged by Mateo Jozefo and Bastien III to bring an end to war and create two distinct political entities. This formalized the Stratocratic Republic, or Western Rakeo, and was a formal admission that the Theocratic government was now restricted to Eastern Rakeo. The ceasefire required that both sides hold a convention to reunite the country in one year's time.

Within Paragon (then under Theocratic control) an antiwar strike began, severely effecting war production. The strikes were organized by a group known as the Rakeoian Miguelists League, and argued that the war was between the moneyed interests of families that owned industries in Olino and Paragon, and a corrupt clergy. The strike was rapidly suppressed by the Theocratic Guard, strikebreakers were brought in, and the card-carrying members of the RML were tried for treason and executed. 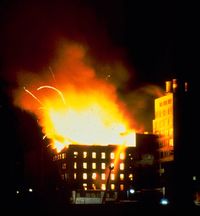 During the last months of the ceasefire, two massive explosions rocked the capital of the Republic. One of these was a munitions factory. On the night of March 3rd, 1952, after the plant closed, a fire alarm was tripped at the factory. Because of the explosives being handled there, emergency responders moved to evacuate nearby residents. Two hours after the alarm had first gone off, an ignition source breached the walls of the magazine, and around one ton of explosive detonated. While nobody was killed, all of the buildings surrounding the factory were condemned within a month. The terrorist group Rakeoian Sovereignty Front claimed responsibility for the explosion.

The second explosion was at a mill. The initial blast proved fatal for at least two dozens workers, while the resulting fires killed six firefighters who arrived to attempt to extinguish the blaze. The Republican government blamed this explosion on the RSF. However, the RSF denied responsibility, and an investigation of the the mill by independent inspectors was came to the conclusion that dry millstones had caused combustible flour dust to explode. The cause of the explosion was still disputed by high-profile members of the Rakeoian diaspora.

After the ceasefire collapsed, the Stratocratic Authority began a campaign of heavy shelling. The objective was to seize fortifications constructed in a blast quarry just west of Paragon. The Theocratic government protested the shelling, calling them chemical weapons, and therefore illegal under the basic laws of war, declaring that any artillery crews that were captured to be executed as war criminals. The reports of chemical shelling stopped on October 22, 1952, but shelling in general continued for an additional fortnight. When the artillery bombardment failed to break the resistance of the entrenched Theocratic Guard, Stratocratic command decided to build up infantry presence in the area. On the night of 4 November, an assault began across the quarry following a protracted sector bombardment. 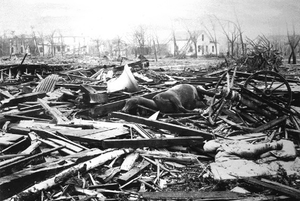 Remains of a local church

After the capture of Paragon, XXXX attempted to solidify their shattered and porous frontlines.

Aimed at dealing a fatal blow to the Stratocratic Republic, Operation Winter Wolf was based in a strategy of mechanized speed and deception. Theocratic command believed that Olino's southern defenses would be venerable in the subzero temperatures and blizzard conditions that winter. To try and ensure complacency, several double agents in the RSF were told to fed information about a summer offensive hitting Olino by summer of 1954.

By December, the offensive was bogged down by a static defensive line established by Brigadier Richard Cornell. Without proper logistics and rapidly running out of supplies, the Theocratic Guard's army collapsed and was forced into surrender.

After the disastrous performance of the Theocratic Guard during the winter of 1954, Army Group South of the Stratocratic force managed to pierce to Lake Ardent and establish a springboard for a future operation. In support of the advance, a railroad was constructed by Army South from Olino to the new stronghold, known as Heartland. A group of 200,000 men and women were conscripted by then-Field General Cornell to provide labor to the project.

In summer, the situation for the Theocratic Authority was growing increasing desperate. In the west, both stratocractic armies were on a warpath through localized garrisons, and in the south, an increasingly large body of forced laborers and soldiers alike were preparing for an unopposed march to the capitol. After the Paragon siege and complete eradication of Monteta Filo, wealthy members of the clergy and Theocratic Guard made emergency arrangements to leave the country. Seeing the leadership of the nation crumble, Jinosia's city government had the local police force place the remaining leadership of the Theocratic Authority under arrest, and sued for peace.

Use of poison gases

In the siege of Paragon, several entrenched positions manned by the PDA reported that they felt woozy after a shelling. Cleanup crews that attempted to remove unexploded shells reported severe nausea, headaches, and dead bodies that had red cheeks, consistent with the pathology of carbon monoxide poisoning. These suspected chemical shelling efforts stopped almost immediately after the establishment of the Terraconserva Council of Nations.

Vehicles deployed by both sides to the southern front for cargo and troop transportation. These combined the characteristics of aircraft and skis to allow for fast movement around the ice sheets of southern Rakeo. The technology of these sleds, originally pioneered by Aleksandro Kristianofilo, managed to bridge a gap between dog sled teams and the more dedicated infrastructure (such as roads or train tracks).

After the construction of the Olino-Heartland line, it was quickly realized that traditional train plows would be useless in clearing the way in deep blizzard conditions. The company Sicily Steel Group located in Paragon was commissioned to create a stop gap measure by fall of 1955, and developed a primitive version of the rotary snowplow railcar.

In media produced by the Rakeoian Film Commission (widely believed to be nothing more than a propaganda arm of the government), the Stratocratic Authority is depicted as a liberating force, protecting the citizens of Rakeo from "the evils of a corrupt parliament, clergy, and war".