Terranihil, (Terranilian: Teraníl), officially the Republic of Terranihil (Terranilian: Freinnortán er Teraníl), is a country on Ecros in Terraconserva, bordering Pavulturilor and Bladium to the south. Occupying 1,449,894 square miles (3,755,210 sq km), it is mostly a dry and mountainous nation with plains and some forests near the coasts and deserts and mountains in the interior. Minaltar is the capital and largest city. The population is nearly 55 million, composed almost entirely of ethnic Terranilians, except for a small Póniepan and Malgan minority. The country is mostly atheist but has significant Muslim and Christian populations.

The eastern shore of Terranihil was once part of the Ayreoshubic Kingdom. The kingdom collapsed about 4000 years ago, causing several tribes to migrate west into unsettled lands and establish small city-states. The city-states remained divided despite sharing a common language, culture and religion, until the spread of Christianity. The Christian Kingdom of Greater Minaltar was founded in 714 AD when many eastern tribes united because of their new Christian faith. Pagans still outnumbered Christians, and in 792, several pagan tribes united into the Kingdom of Hinchivozh. Then in 884, the Avergísian Emirate was established after the spread of Islam. These three countries were at constant hostility, with none of them achieving significant gains against the others until the rise of Emir Ghor. Ghor led the Emirate in conquering Greater Minaltar and Hinchivozh in 1024, establishing the Terranilian Emirate. 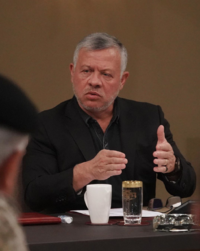