The First Kingdom of Rakeo was established in 656 as an extension of a system of government originally designed to protect farming settlements across the island, upending the status quo of city-states dominating the countryside. While challenges emerged over the centuries, the kingdom remained intact until a plague on crops spread across the island. Forests reclaimed unmaintained fields, and famines took their toll as well. This dark age lasted for the next centuries. At the beginning of the 16th century, the great city-state of the west, Olino, sought protection against the "destiny of conquest" put forth by their western neighbor. In doing so, Moreno I would unite Olino with Paragon and Jinosia in a military alliance that became the rebirth of a united Rakeoian monarchy. In 1838, the Invasion of Rakeo by Creeperopolis dismantled the First Republic and established the Captaincy General of Rakeo. Following the First independence referendum, a colonial republic was allowed to administer the island, and with the Second independence referendum, the Second Republic of Rakeo fully restored the nation's autonomy. In 1950, the Rakeoian Civil War broke out following a widespread mutiny in Olino, and the murder of multiple agents of the Republican government. After five years of bloody fighting, the Stratocratic Republic of Rakeo was solidified as the island's government. 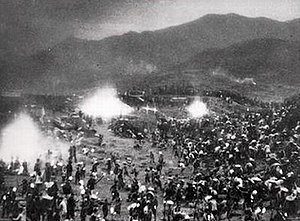 Book burning done during the 1970s' Cultural Restoration
Did you know...
Selected Biography 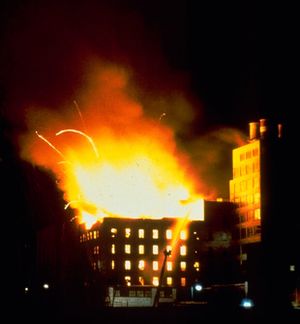 Jinosia Munitions Plant, 1952
The Rakeoian Civil War was a civil war that was fought between 1950 to 1955, between a nationalist-military unified front in the west and loyalists who backed the eastern Rakeoian Republic. The war is generally agreed by scholars to have ended with the surrender of the Republic stronghold of Jinosiá in 1955. Despite this, the Stratocratic government has never formalized any treaty ending the war, saying that the Rakeoian diaspora and its descendants are "enemy combatants, war criminals, and terrorists". Read more...
Rakeo topics
Retrieved from "https://lcnwiki.xyz/index.php?title=Portal:Rakeo&oldid=67275"
Categories: