In this Creeperian name, the first or paternal surname is Pareja and the second or maternal family name is Palau.

Orlando Óscar Pareja y Palau (born 24 July 1974) is a Salvadoran politician and Creeperian author and former professor who is the incumbent President of El Salvador. He assumed office on 1 January 2021 after winning the November 2020 presidential election.[1][2]

Pareja Palau is a controversial figure due to his support for the Jewish Holocaust conspiracy theory, his overt Malgaphobia, and his general unprofessionalism as a politician.[2][3] He has also been known to publish several works of propoganda that heavily support the Creeperian government and oppose and even attack groups such as Muslims, Homosexuals, Atheists, and Leftists.[2]

Orlando Óscar Pareja y Palau was born on 24 July 1974 in San Romero, San Romero, Creeperopolis. His father is Óscar Armando Pareja y Ortez and his mother is Olga Miranda Palau y Kattán de Pareja. He is the second of three children, with his older sister being Layla Susana Pareja y Palau and his younger brother being Jesús Adolfo Pareja y Palau. Pareja Palau and his family lived in the city of San Romero until 1981 when his father got a job for the National Coffee and Sugar Corporation, after which they moved to San Adolfo.

Pareja Palau enlisted in the Creeperian Air Force on 1 Januaray 1998 to serve his 6 years of conscription. He was a part of the 18th Air Force Wing and attained the maximum rank of Sergeant. During his service years, he became a fighter pilot for the Maroto Botín MB-23 fighter jet.

According to Pareja Palau himself and official documents, he was actively involved in bombing operations during the Mara War against Mara Salvatrucha, particularly in Operation Santiago Matadeltinianos in 1999. Pareja Palau also claims to have bombed the Council of Mayors buildings during the 18 June 2003 Creeperian coup d'état. Although the 18th Air Force Wing did participate in the the bombing of the Council of Mayors during the coup, no definitive documents have surfaced that verify Pareja Palau's claims. Minister of Defense Augusto Cabañeras Gutiérrez stated that he does not know for sure if Pareja Palau did participate in the bombing but that he would like to believe that it was true. He was honorably discharged from the Air Force on 31 December 2004 after serving for six years.

Pareja Palau returned to Antonio José Sáenz y Heredia University in 2005 to become a professor of National History and Political Science & Government. He was accepted and began teaching in 2006. Before he began teaching, in 2005, he published Historia de los'Reyes, a work that briefly covers every Creeperian monarch from Head Chief Machtītin I in 220BC until Emperor Alexander II. He also published La'Cruzada, a work that covers the events of the Creeperian Crusade from 1231 to 1345 in great detail. Both works allowed him to win the Best Creeperian Author of 2005 award.

From 2005 to 2009, he studied for to more degrees at the university while teaching there. He completed 2009 with a bachelor's degree in International Relations & Affairs and another in Law. He wrote and published La'Liberación del Gran Sacramento for his International Relations & Affairs course in 2007, earning him the Best Creeperian Author of 2007 award.

In 2013, Pareja Palau published La'De-Catolización, a work critics say is by far his greatest. The work covered the events of the De-Catholization, the Creeperian Civil War-era genocide perpatrated by the National Council for Peace and Order from 1933 until 1949. In it, he describes what the National Council did to the genocide's victims. He denounced communism and atheism in the work. He also opposes the figures of homosexuals and Deltinian Muslims. He acknowledges that they were in fact killed, but he stated that their deaths were necessary and legal and did not constitute a war crime. The work earned him the Best Creeperian Author of 2013 award and the Gaceta Creeperiano Common Creeperian of the Year for 2013. 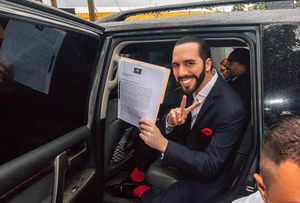 Pareja Palau after being nominated for President of El Salvador in October 2020.

On 7 October 2019, the Salvadoran government of President Alexander Giammattei Falla and anti-government protestors reached an agreement to end the protests that had been ongoing since January 2020.[4] The Ciudad Los'Ángeles Agreement was signed by both parties which put new elections into effect, nullifying both the 2019 and April 2020 presidential elections.[4]

The agreement was as follows:

The government and protestors agreed to hold the elections on 1 November 2020 in the form as a general election. 1 November was to be set as the date for all future elections as it had been in the past.[4] The results of the previous election in April 2020 were agreed to be cancelled. Alexander Giammattei Falla agreed to continue serving as President until 1 January 2021 when the new President would take over.[4] He also agreed to not run for reelection.[4] The new constitution would prohibit people from holding the office of President for two consecutive terms, just like the then current constitution did.[4] The constitution would also set the seat count of the Legislative Assembly at 111, each representing one legislative district in El Salvador.[4]

The Creeperian Initiative announced its candidates shortly after the signing of the agreements.[4][5] The first nomination for President put forth by the Creeperian Initiative was Pareja Palau.[5] His running mate was Antonio Ulloa Garay, the former Mayor of El Congo from 2011 to 2019. He graduated from the University of Ciudad Los'Ángeles in 1999 and became a lawyer and joined the Initiaitve in 2003. Ulloa Garay was chosen by then President Manuel Arboleda Guillén to be the Mayor of El Congo in 2011. He resigned as Mayor in 2019 and returned to being a lawyer.

The campaign logo for Orlando 2020. 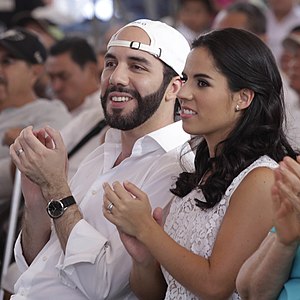 Pareja Palau is a devout Creeperian Catholic and supports the Church with his "whole mind, body, and soul." He is an ultranationalist and upholds Creeperopolis, and now El Salvador, above all else. He vehemently opposes Atheism, Communism, Homosexuality, and Islam, referring to all of them as the "Four Horsemen of Sin and Suffering."

He declares himself to be the "proudest Romerist to ever live."

I am Orlando Pareja Palau. I am a Romerist. I am the proudest Romerist to ever live. I reject homosexuality. I reject communism. I reject atheism. I reject Islam and Baphomet.[lower-alpha 1] I only serve the Father, the Son, the Holy Spirit, the Emperor, and the Fatherland. May the Fatherland triumph against the Four Horsemen of Sin and Suffering. May God strike down those who sin against him without any sign of remorse or repentance. I believe in forgiveness, but homosexuality, communism, atheism, and Islam are too great of crimes for us mortals to forgive. That is why they must be sentenced to death for God to be the ultimate decider if they truly repent and are welcomed to Heaven.

Pareja Palau is overtly homophobic.[2] He denies the label "homophobic" and instead refers to himself as an "Anti-Homosexual" explaining that "I don't fear gays, I despise them." In La'De-Catolización, he stated, "The life of a Creeperian or a Catholic is much more valuable than one of a Deltinian or a Homosexual." During the first presidential debate for the November 2020 Salvadoran election on 10 October, Pareja Palau attacked homosexuals on many occasions.[3] Domitien Ntaryamira, a Lyoan politician, stated that he approved the Pareja Palau's "strong stance against homosexuality." 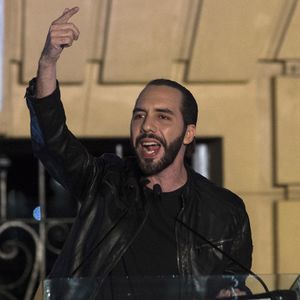 Pareja Palau is overtly Islamophobic.[2] He denies the label "Islamophobic" and instead refers to himself as an "Anti-Islamist" explaining that "I don't fear Muslims, I despise them." In La'De-Catolización, he stated, "The life of a Creeperian or a Catholic is much more valuable than one of a Deltinian or a Homosexual." In La'Liberación del Gran Sacramento, Pareja Palau attacked Greater Sacramento for its "overt homosexuality and Islamization" stating that it is "the birthplace of the degenerate religion of Baphomet."[lower-alpha 1]

In Historia de Catolicismo, Pareja Palau supported the truth of the so-called "Jewish Holocaust," a conspiracy theory that asserts Muslims in the area of present-day Greater Sacramento perpetrated a genocide against the Jewish people from 33AD to 900AD.[2] The conspiracy theory commonly cites the disappearance of Judaism in the country during that time. Despite reputable historians stating that there was no genocide against the Jewish people and that the Jews in Greater Sacramento converted to Christianity or Islam, Pareja Palau claims that the conspiracy theory is fact. He claims that he was researching the Holocaust since 1983, but many agree that he plagiarized the conspiracy theory from Skilir Abers, a Terranilian professor at the University of Tolongen, who first published the conspiracy theory in the Terranilian History Journal in 1995. Nonetheless, Historia de Catolicismo had a serious impact on Creeperian academia and belief in the conspiracy theory is mandated in Creeperopolis as an unquestionable truth about the history of the Abrahamic Relgions. It was instituted into the Creeperian education system as Anti-Islamic propaganda aimed at demonizing the minority Deltinian Muslim population of Creeperopolis.[citation needed]

"The unquestionable truth about the Jewish Holocaust in Greater Sacramento cannot be questioned. It is a fact that it occured from 632AD to 900AD as an attempt to destroy Judaism from the area. The Jewish Holocaust proves the inherit evils of Islam, and as such, proves why [Deltinian] Islam has no place in Creeperopolis."

The Jewish Holocaust is commonly cited as what could or will happen to Creeperian Catholicism if Deltinian Islam is allowed to continue to exist.[citation needed] It is used as "evidence" by critics of the Creeperian government in order to prove the existence of a "Deltinian Genocide" in southern Creeperopolis.[citation needed]

Pareja Palau endorsed the Creeperian government's decision to make practicing Islam punishable by death in May 2020, praising it as "a step in the right direction for Creeperopolis."

Pareja Palau is overtly Malgaphobic.[2] He denies the label "Malgaphobic" and instead refers to himself as an "Anti-Malgan" or an "Anti-Malger" explaining that "I don't fear Malgers, I despise them." He commonly uses the racial slur "Malger" when referring to Malgans. During the first presidential debate for the November 2020 Salvadoran election on 10 October, both Pareja Palau and Morales Cabrera used the racial slur "Malger" 69 times.[2][3] They continued to discuss the existence of the "Malger World Order" or "Malger–Squg World Order" and "Malgerbeshia," in reference to Aurebeshia, as a threat to El Salvador and Creeperopolis.[3] Morales Cabrera defended Pareja Palau's and his own overt racism against Malgans by stating that "Hating Malgers is not racist."[3]

State or government honors and awards