Operation Tigera was the operational name given to a joint offensive by the Terranilian Armed Forces and Rally for Lyoan Democracy. Terranihil had hoped to end the Second Lyoan Civil War quickly with an offensive that would capture Tigera and install a government more favorable to Terranilian interests. On April 4, 2020, the TAF along with rebels from the RLD's Southern unit flew into Tigera Military Airport and quickly overwhelmed it. Although the operation was initially successful in capturing much of the area south of Tigera, intervention by the Creeperian Armed Forces prevented the fall of the city. Terranihil and its allies were forced to retreat back to Tigera Military Airport and quickly fly back to the rebel-held city of Kalole.

In the preceding months to the beginning of the second civil war, the Lyoan government and its Special Security Service had allegedly begun to back a Terranilian insurgent group, the Democratic Forces for the Liberation of Terranihil, in order to combat Islamism in the neighboring nation. The alleged support was called out by Terranihil publicly, who continued to insist that the Lyoan government was hiding its leader and had provided means for their resurgence. This had caused the Terranilian government to begin supplying the RLD rebellion when it began in March. This increased tensions between the two nations as the months went on. The Terranilian government soon realized that they could not simply rely only on the RLD to replace the RUF's government.

In an attempt to quickly depose Kemoh Foday, Terranilian defense minister Kail Una proposed a plan in which the TAF and allied rebels would fly into Tigera Military Airport then proceed to march on the capital. Una believed that the Lyoa National Army would be caught off guard and would be quickly overwhelmed, allowing for a quick change of power. On April 3rd, Terranihil informed RLD leader Sammy Inikota of the plan, which he quickly agreed to.[1]

On April 4th, the Terranilian Air Force flew in five airliners to the rebel-held Kalole International Airport alongside 260 operatives of the DOSTÉV, Terranihil's special forces.[2] There, the Terranilian troops joined RLD fighters in preparing for the flight into Tigera Military Airport. The aircraft were refueled, and RLD fighters joined the DOSTÉV operatives in loading up the aircraft, and began the flight to the airport.

On the night of April 4th, the airliners landed at Tigera Military Airport, carrying nearly 1,000 soldiers and rebels. Using airstairs to exit the aircraft during taxi, the Terranilian commander, Zatšer Sral, lead his troops out of the aircraft to quickly occupy the airport.[3] A garrison of the LNDF approached the attackers, but did not fire. Sral called for them to surrender using a megaphone, which they complied with, eventually defecting to join the rebel forces.[4] With this, the airport was quickly secured, and would be used as a staging area for the rest of the operation. 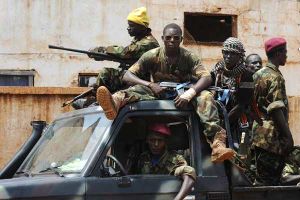 RLD fighters during the march on Tigera

After being notified of the capture of the airport, Sammy Inikota requested that Terranihil airlift 1,000 additional rebel forces to the airport to assist in the operation. Terranihil agreed, and began the airlift. [5] On April 6th, the advance on Tigera began. Vehicles brought from Terranihil and those captured at the airbase assisted in the mobility of the rebel forces, and they were able to capture a significant amount of territory in a short time.[6] The LNA proved unable to successfully put up a defense against the rebel offensive. The same day, Creeperopolis began to divert armed forces to Tigera to assist the Lyoan government in defending against the rebel onslaught, flying in 1,000 troops to Tigera International Airport.[7] On April 7th, rebel forces captured the power plants of Inguta, Narishi, and Bendera, which provided power to Tigera.[8] Rebel forces proceeded to cut this power off, causing mass unrest in the city.

Chaos in the Capital

With rebel forces rapidly advancing and the power to the city cut off, many civilians began to flee Tigera, and some began to riot. Widespread panic was seen in the city, with civilians worried about fighting possibly occurring in the capital. In an address to the citizens of Tigera, President Foday called upon the people to mobilize and root out those disloyal to the government. Attacks against alleged political dissidents were reported to have happened following this.

On the night of April 7th, Creeperian troops arrived at Tigera International Airport, which had been shut down to allow for the arrival of allied troops.[9] Around 1,000 troops under General Santiago Villacrés Garrido prepared to mount a defense against the oncoming rebels. Scattered fighting began as Creeperian and government troops made contact with the rebels around 4 miles from the Tigera. Pro-government forces retreated to the airport, where they mounted a defense against rebel troops.

Several days of heavy fighting began, although none of it reached Tigera proper. Thousands were displaced, and several hundred were killed either directly from combat or from getting caught in the crossfire. On April 10th, RLD and Terranilian forces began a withdraw after being unable to advance past the airport. That same day, the additional Creeperian reinforcements coming from the Morovan coast arrived to continue pressure on the now retreating rebels.[10]

After being beaten back, Sral's troops began a general withdraw back to Tigera Military Airport. Throughout this time, Creeperian and Lyoan troops followed them to ensure that a counter-attack was not possible. Sral radioed the garrison at the military airport and informed them the need for a quick retreat back to Kalole.[11] On April 15th, Terranilian forces and their rebel allies completed their retreat, with over 1,000 retreating back to rebel-held areas.[12] The remaining rebel forces retreated into the bush, attempting to make it back to allied territory on foot.

Following the operation, remaining rebel forces in the region were hunted down by the FAC and LNDF. The rest were alleged to have made it back to RLD-held areas or had surrendered to the government. The failure of the operation had caused some dissent within the Terranilian government as to whether continued intervention in Lyoa was necessary, although these voices were largely overshadowed by those in the government who supported the invasion. Terranilian troops remain in the country, but act as support to the RLD in their strongholds.