Operation Genesis 19:24–25 (Creeperian Spanish – Creeperian: Ոպերածիօն Գենեսձս 19:24–25; Creeperian Spanish – Iberic: Operación Genesís 19:24–25)[note 1] is an ongoing military, political, and legal campaign in Creeperopolis involving widespread political and social repression, the suppression of information, and terrorism, including both state terror and state sponsored terror. The operation aims to suppress denial, commendation, and questioning of the De-Catholization, to repress various leftist political ideologies and movements, including Miguelism, communism, socialism, and democratism, and to persecute both political and religious atheism.

Outside of suppressing leftism and leftist ideas in Creeperopolis, Operation Genesis 19:24–25 also engages in international operations to capture fleeing Miguelists or other political dissidents. For example, in 2005, the Creeperian government ordered for the extradition of Major José Villanova Juárez from Paleocacher for war crimes committed during the civil war, and in 2020, the Creeperian and Lyoan governments launched a joint-operation to capture Lieutenant General Antonio Gisbert Alcabú, the leader of the so-called Creeperian Government-in-Exile (GOCREX).

The operation was named "Genesis 19:24–25" in reference to the verses of the Book of Genesis which narrate the destruction of Sodom and Gomorrah by God. The text itself, Genesis chapter 19 verses 24 to 25, reads:

"And the LORD rained down sulfur upon Sodom and Gomorrah, fire from the LORD out of heaven. He overthrew those cities and the whole Plain, together with the inhabitants of the cities and the produce of the soil."

Sodom and Gomorrah were two Biblical cities destroyed by God for their wickedness and sinfulness,[1] and in naming the operation after the verses in which the two cities are destroyed, the Creeperian government is painting those targeted by the scope of the operation as wicked and sinful.

The operation's name was proposed by Emperor Romero II to symbolize the victory of the Church over atheism and sin, and to also symbolize that the government will totally and utterly destroy all those subject to the operation. The operation's name, being uniquely a direct reference to verses of the Creeperian Catholic Bible, later inspired the similar names of other Creeperian military operations, including Operation Genesis 3:15, Operation Exodus 12:29, and Operation Matthew 18:33–34.

The execution of smugglers in the Catholic Zone of Adolfosburg, 1934.

The De-Catholization, alternatively known as the Creeperian genocide, was a widespread series of massacres, mass murder, forced deportations, and forced labor committed by the far-left National Council for Peace and Order (National Council, CNPO, or Miguelists) during the Creeperian Civil War. The atrocities committed by the National Council, which has been described as a genocide, an ethnocide, and cultural, social, and religious cleansing, unofficially began in 1933, but became officially an mandated National Council policy on 15 August 1935 with the Adolfosburg Conference. At the conference, Emperor Miguel VII, the National Council's claimant to the throne of Creeperopolis, met with several of his high-ranking military officers, including Supreme Caudillo Juan Salinas Figueroa, Field Marshal Pascual Espinar Casaus, Field Marshal Miguel Salinas Ortega, and Secretary-General Cayetano Handel Carpio. There, they established a series of concentration and extermination camps across the departments of Cazalla (renamed from San Luís) and Adolfosburg to hold, force to labor, and murder individuals seen as undesirable by the National Council, including Romerist prisoners-of-war, homosexuals, Deltinian nationalists, and especially devout Creeperian Catholics, who where the primary target of the De-Catholization.

The primary objective of the De-Catholization was the eradication of Creeperian Catholicism from Creeperopolis, as the Church was seen as the most oppressive force within Creeperian culture by the National Council. The National Council believed that, as long as Catholicism was eradicated from the country, the country would be more liberated and more prosperous. The National Council offered the opportunity for Catholics to abandon the faith, even establishing Apostates for the Cause (APÓCA), a paramilitary organization made up of Catholics who left the faith under the National Council's guidance. APÓCA partook in unorganized massacres of Catholics during the De-Catholization, while organized massacres were committed by the Atheist Red Army (ERA), the Elite Medical Detachment (DEMÉDEL), and most infamously, the Special Task Squadrons (ESTARES). Originally beginning as simply segregating Catholics in major cities into Catholic Zones, the De-Catholization turned into a deliberate effort to eradicate Catholicism through mass murder. The six extermination camps (Joyagua, Jucuaguel, Mafrerio, Quetgoza, Sechakan, and Teguracoa), the widespread massacres, and other killings committed during the De-Catholization killed an estimated 12.6 million people. 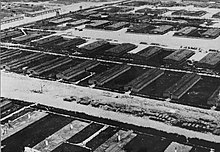 An aerial view of the Teguracoa camp after its liberation in 1949.

The far-right Catholic Imperial Restoration Council (Imperial Council, CRIC, or Romerists) were aware of the atrocities committed by the National Council during the civil war to the extent that the Imperial Council also committed widespread atrocities against the Miguelists, but they were not aware of the organized structure of the atrocities being committed. The Imperial Council began to gain knowledge of the organized atrocities in early-August 1949 with the liberation of Quetgoza by General José Primo Jalisco. The conditions of the camp were described as "appalling and inhumane" by Primo Jalisco, who informed his superiors of the existence of the camp. In response, Supreme Caudillo Alfonso Cabañeras Moreno instituted an order issuing no-quarter to all National Council officers and soldiers, captured at any liberated camp, and after the order was issued, Primo Jalisco ordered the immediate executions of 106 captured National Council officers and soldiers at the camp.

Joyagua and Sechakan were liberated in August and Jucuaguel was liberated in September. Teguracoa, the largest camp and the camp where the most people died, was liberated on 6 September 1949. The final camp, Mafrerio, was liberated on 19 September 1949, only eleven days before the end of the civil war on 30 September 1949. Camp survivors told the army about the atrocities committed at the camps, which led to the succeeding Creeperian government to begin formulating an operation to organize the total and complete suppression of any Miguelist activities within Creeperopolis.

On 4 October 1949, the victorious Imperial Council abolished the parliament and dissolved all political parties, and in their place, established the General Courts and the Nationalist Creeperian Catholic Royal Initiative and the Pro-Fatherland Front of Unification (Creeperian Initiative, or IRCCN y la'FPPU, the Initiative). The Initiative was the merger of the National Conservative Party (PCN), the Catholic Royalist Party (PRC), and the Creeperian Pro-Fatherland Front (FPPC), and was the sole legal political party of Creeperopolis, holding all of the General Courts' 180 seats. The General Courts consisted of 150 viceroys, or the mayors of Creeperopolis' 150 most populous cities, and 30 captain generals, the 30 heads of the 30 Creeperian departments.[note 2]

On the first day of the General Courts' existence, its members voted unanimously to begin the process of formulating a way to tell the truth of the atrocities of the De-Catholization and to suppress all forms of its denial and any support for leftist organizations and ideologies. The General Courts in-charged three of Creeperopolis' national-level ministries to devise a plan to do as such: the ministries of intelligence (MININT), defense (MINDEF), and law enforcement (MINLEY). Between October 1949 and July 1950, the ministries and the General Courts worked out a general plan. The outline of the operation was presented to the General Courts on 6 July 1950 and was passed unanimously by all its members. After the vote passed, Emperor Romero II spoke in affirmation of the operation and named it Operation Genesis 19:24–25.

Emblems of the secret police, army, and police.

After the operation was approved by the General Courts, the ministries of intelligence, defense, and law enforcement began enforcing its laws and protocols. Before the law was passed, support for or adherence to communism, especially Miguelism, socialism, democratism, and atheism was de facto illegal, however, the law made support for or adherence to said things officially illegal. The National Intelligence Directorate (DINA), Creeperian Army (EC), and Creeperian National Police (PNC) were placed in charge of enforcement of Operation Genesis 19:24–25.

The secret police, army, and police began mass arrests of people who had formerly fought for the National Council or were politicians who supported leftist movements in Creeperopolis. The three organizations also targeted people who were merely associated with leftist soldiers and politicians. The people who were arrested were sent to various high security prisons across Creeperopolis and were sentenced to sentences varying from life to death. Partisans soldiers who fought with one of the five rebel groups between 1949 and 1957 were also targeted by the operation.

The following activities and ideologies were made illegal by Operation Genesis 19:24–25:

The exact death toll of Operation Genesis 19:24–25 is unknowable, while estimations of the death toll are highly disputed among scholars, historians, and even the Creeperian government. According to the Creeperian government, by 2002, the last year that the official death toll was updated, Operation Genesis 19:24–25 had killed 175,000 people. The figure of 175,000 dead is generally considered to be the lowest possible estimate, however, as the figure has not been updated since 2002 (20 years ago), the lower bound of deaths would now be much higher.

Higher estimates of the death toll have been proposed. In 2019, Emile Embashe, a professor of Modern Political Sciences at the University of Tigera (UTIG), and Orlando Pareja Palau, a professor of National History and Political Science & Government at the Antonio José Sáenz y Heredia University (UAJSH), estimated that the death toll of Operation Genesis 19:24–25 was approximately at 230,000 deaths. Giuseppe Abdilla, a historian at the University of Dimizia (UDM), estimated that 245,000 people were killed by the operation as of 2017.