New Gandor, officially the Greater Republic of New Gandor (Gandorian: Nowy Gąsior) is a Medium sized nation on the main Eastern landmass of Terraconserva. It is bordered to the south, east, and west by ocean, to the north by Gjorka and Ajakanistan. New Gandor's capital city is New Union City, but Iornbarron is considered the largest in the country. New Gandor is one of the original founding members of the Terraconserva Council of Nations. New Gandor is also a member of The Ostlandet Union.

New Gandor's earliest founding goes back to the formation of Gandoria around 170 B.C. and absorbed into the Avansert Empire around 132 B.C. It was re-founded in the year 326 C.E. as a result of the Great Divide. A loosely associate Commonwealth was formed right after, but the system was doomed to fail. In 1660 a civil war broke out between Nationalists and Loyalists. The civil war lasted forty four years and concluded with the creation of the Greater Republic. In 1710 a Constitution was created on the foundations of fairness to all, a strong military, a booming economy, and above all faith. New Gandor is currently allies with Creeperopolis, and Paleocacher, including trade, and politics. The current leader is President Jacek Sekorsky

The earliest records of New Gandor date back to Gandoria which was tribe of slavic speaking peoples, around 170 B.C. until 138 B.C. when the Avansert Empire started claiming land and absorbing tribes. Fearing slaughter they surrendered to the empire and were officially absorbed in 132 B.C. The leaders thought if they surrendered peacefully they would keep some of their identity. However they were betrayed, Gandor's identity was stripped and were forced into servitude in a lower class.

In 326 C.E. The Great Divide began. The Gandorian's after years of unrest from the betrayal and wanting to gain independence, they joined the side of the Republicans. War ravaged the Empire, claiming a countless number of lives. The Great Divide ended in 452 C.E. Gandor was ceded the southern most part of the now collapsed Empire, including its original tribe lands.

The commonwealth era and the New Gandorian Civil War 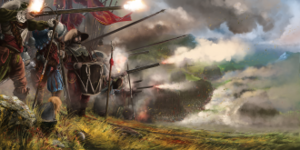 A painting of a battle from the New Gandorian Civil War (late).

Down south New Gandor attempted to build a loosely associated Commonwealth with the three things as a priority Faith in God, defense through military, and an efficient economy through trade. These were called the 3 core values. The 3 core values led the country to greatness. A millennia later greed swept the nation. The leader was a puppet to many wealthy citizens and the Economy was the main focus of the greedy elite, and the average citizen began to suffer. The 3 core values New Gandor was founded on seemed lost and replaced with a system much like a monarchy. New Gandor was shrouded in darkness. Hundreds of years pass and in 1660 a Nationalist spark ignites New Gandor once again. A group called The Easterners. These Nationalists fought against the corrupted and tyrannical old government of New Gandor. New Gandor was now in it's own civil war.

New Gandor was divided East and West. The East called Eastern New Gandor or Easterners or the Nationalists. The West including Union City (modern New Union City) occupied by the Old Regime. Due to the invention of muskets and the use of cannons, the bloodshed through out the country was great. The bloodiest being The Battle of Union City. Out of the entire male population of New Gandor over one third died in a span of a week during the battle. The outcome was an Eastern victory over the Old Regime, the occupation of Union City, the surrender of the Old Regime, and the exile of the corrupted King Aleksander Tyran. Over half the male population of New Gandor died over the forty four year conflict lasting from 1660-1704.

This also saw the beginning of New Gandor's separation from the Creeperian Catholic Church. During the civil war Father Szymon Witowski began a movement away from the Creeperian Catholic Church seeing it as an avenue of the corruption that brought New Gandor to civil war. Witowski formed The Gandorian Protestant Church or Wschódism after the easterners that brought about the change for New Gandor's benefit. 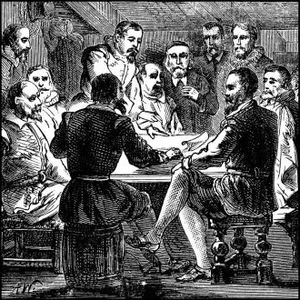 A Sketch of the Easterners drafting the constitution

The Reconstruction of New Gandor seemed like an impossible task, but the newly freed peoples banded together. Reconstruction was not reintegration in a sense but more of rebuilding the country and re-founding the 3 core values. Reconstruction and Re-implementation took four years lasting from 1704-1708.

In 1708 the idea of a Constitution was set into motion. Two years of debate, bargaining, and compromise produced the 1st and current Constitution of New Gandor. In 1710 it was ratified and implemented to all the regions.

Soon after the economy started booming, the military became the backbone of the country , and faith in God was at an all time high and didnt look to slow down. A Stratocratic-Republic was formed, vowing to never have the true identity of New Gandor lost to history again.

New Gandor is a republic, but with a few minor differences. There is a republican component and a stratocratic component. In the republican part there is a unicameral legislature, a supreme court, and an executive branch. There is a system of checks and balances in place to ensure no one branch overtakes the other. Officials are elected on a term basis, save a few appointed positions. The stratocratic part comes into play by military involvement in each branch, excluding the Judaical branch. The military officials in each branch are there to advise, not limit, or oppress the processes of each branch.

New Gandor unlike other republics and democracies has a unicameral legislature called Kongres. Its is the job of the legislature to write up, edit, and vote on laws, confirm presidential appointments, declare war, and make a national budget. They also have the power to investigate the executive, and judicial branch within reasonable cause.

The stratocratic element comes into play with the Legislative Military Attache. It is their job to advise the legislature on current military actions and issues, as well as weigh in on declarations of war.

Like most other democracies and republics the executive branch is headed by the President, the Presidents Cabinet, and the Vice President. It is the job of the executive to implement and enforce laws created by the legislature. The President has the ability to veto bills, appoint justices to the Supreme Court, and all other justices, as well as ambassadors to other countries. The President is also the leader of the New Gandorian Armed Forces, and is head ambassador. The President also has the power to pardon, and create treaties with other nations.

The stratocratic element is built into the executive with the presidents role as Commander in Chief, as well as the cabinet position of Sectary of War.

The job of the Judiciary is to interpret laws, settle legal disputes, punish violators, hear civil cases, protect individual rights granted by the constitution, determine guilt or innocence in federal crimes, and interpret the constitution.

There is no stratocratic element in the Judiciary.

New Gandor is divided into 5 provinces. New Union (home of New Union City), Obfity (home of Iornbarron), Centralny, Nizinny, and Erie. New Union is hilly with some flat lands, with a portion of the Unia Mountians. Obfity has a small mountian chain as well as hills and flat lands. Centraly contains most of the Unia Mountians and some hills. Nizinny is hilly with some flat lands. Finally Erie holds the Zimana cliffs over looking ocean.

A few other companies are part of the economy. A notable one being Under Armor. 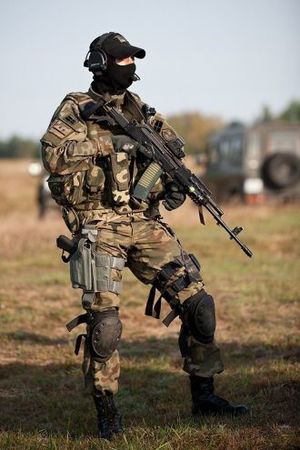 Currently in the New Gandorian Armed Forces there are 2.52 million service men and women. There are 3 branches consisting of army, navy, and air force. There is also a special forces branch called Rosomak. Approximately 25% of the New Gandorian budget goes towards the military, seen as a deterrent through strength and numbers to avoid conflict. All able body men are required to serve a minimum of 3 years starting at age 18. After this they can choose to make a military career or become reserve. All reserve personal up to age 45 can be called into service again in the event of a draft. Women are not conscripted and have a choice in joining the military.

This is the break down of personnel.

There are five regions inside New Gandor. They are New Union (home of New Union City), Obfity (home of Iornbarron), Centralny, Nizinny, and Erie. 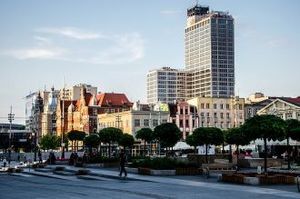 A photo of the governmental/business district of New Union.

New Union City is located in the New Union Province. It is the capital city of New Gandor. It has residential, buinensess, and governmental districts throughout. It is home to the Presidental House, Convention Plaza (seen in the picture as the tallest building in back), Rosomak HQ, and other governmental buildings. It is also home to Under Armor Arena 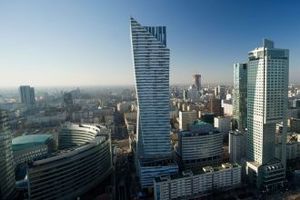 A photo of downtown Iornbarron 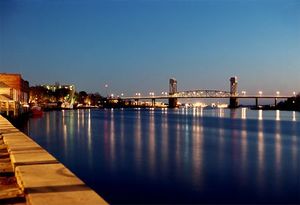 A photo of 'Trader's Pass' (The bridge seen in the photo)

Fort Handel is located in the Eire Province of New Gandor. It is a major trading city and is nicknamed 'the vein of New Gandor'. It is considered the first city travelers from the west see, on boat or plane. It is home to Trader's Pass and Nea Gandor's largest naval base.