Nagarno, also known as Nagarno Von Schonerer, has a colorful history on NS, and his actions indirectly led to the establishment of many of the organizations that are now commonly known to the LCN.

Nagarno first joined NationStates as Germany Fascist Republic, starting a region in the month of May, "Nationalist Front", that vowed to fight communism. After that effort failed due to a raid from unspecified forces, Nagarno left for other regions.

The GCA was the nexus for conservatism on NationStates, and was where Nagarno first became known for his attempts to gain power.

The nation of New Nagarno created a region, known as the United Commonwealth of Nations, which served as a template for when Nagarno would try his hand again at region creation. Unfortunately, the region itself has been consumed by the sands of time, and the only trace of its existence is a disjointed collection of dispatches and snapshots from the internet archive. The region was formed approximately on March 30.

UACN Conflict
Within the region Great Conservative Alliance (GCA), a nation known as Largrangian caused a major breaking up of the community when he took power, one of the refugee regions from this conflict was the UACN, and another was the UCN. The political climate shifted, and the UCN and UACN became rivals, with the UACN backed by the GCA, and the UCN allying itself with the Federation of Greater German Republics (FGGR). By May 5th, the region has a fairly well developed government, with five governmental positions and a constitution. The UCN first served a place of diplomatic negotiation: A peace deal was relayed by Gywnwaith, better known as Malphe, to end the conflict.

Nagarno pulled the UCN out of the alliance in order to participate in the UACN's politics, rather suddenly, much to the duress to the FGGR who had been expected UCN backup for their mutual raid of the UACN.

By June 2nd, the region had been refounded by a now-defunct raiding organization, Varangian Guard, and was left dormant. Until August 20th, when the Varangian Guard merged with Star Wars Battlefront, leaving many occupied regions open for reclamation.

July 8th marked the region's capture by Nagarno, under the banner of Bunicken, whose control it was under for the next year. The region now rests in the control of the LCN.

Once in the UACN, Nagarno began a short lived campaign to become president. He was running against Sanders Centre (before SC's fall from grace), and was quickly losing ground in the election. Once it became clear that he was unlikely to get elected in the region, he left to the LCN.

During the early days of the LCN, Nagarno secured endorsements from CSNA (now know as Quebecshire) and Adawn for an attempt to become the second president of the LCN. However, this attempt ran into a roadblock fairly quickly, as Nagarno butted heads with Quebecshire and Andrew Du over how the military should relate to the role of presidency, resulting in Quebecshire withdrawing his endorsement. After that was resolved, Quebecshire reinstated his endorsement of Nagarno, and the first presidential race in the history of the LCN occurred, pitting Bulwulda, New Nagarno, and British Confederacy.

During this campaign, various regions where Nagarno had been previously informed the LCN of their discomfort with the possibility of him assuming offices- These concerns were disregarded. After winning the election, Nagarno attempted to establish his constitution and attempted to liberate a Nazi trophy region that the LCN militia had seized all through usage of executive orders. As consequence, on the second day of his presidency, Nagarno was given until 10 am est to step down from his position or be forcibly removed.

After the coup, Nagarno tried to sue Quebecshire for treason. This never went anywhere, and there was a hasty attempt to create a regional leadership committee with Quebecshire, Adawn, and Nagarno. Then Nagarno was sued over puppet fraud, with intelligence being provided on his puppets by UACN. Two lasting consequence of these events are the LCN's longstanding ban on having multiple accounts in the region, as well as the establishment of a basic home intelligence service.

During 2017 Nagarno indulged in politicking in other regions in the fascist sphere of NationStates, and attempted to infiltrate the LCN with an account known as Eretz Yisreal. 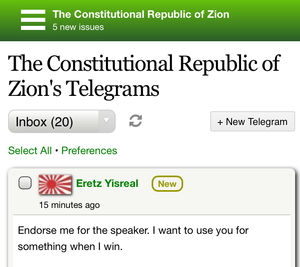 Greater Berlinn was a puppet nation of Nagarno, who engaged in the politics of The Holy Reich of Buniken, and was involved in its previous incarnation, the Reich of Buniken.

Entrance
Eretz Yisreal first joined the LCN obstinately to participate in the regional roleplay, but when elections became open once more, he pivoted almost entirely from the RP towards a bid for the position of speaker.

Bribery In an attempt to gain the position of speaker, EY sent a telegram to Zion, appearing to offer Zion some form of power in return for a political endorsement- this telegram was taken as attempted bribery, and an investigation was launched by the HSA into EY's background. After examining New Berlinn's discord ID number (in the Holy Reich of Bunicken's discord server), it became clear that EY was a puppet of Nagarno, and he was banjected.

Return to the LCN

In 2018, Nagarno returned to the LCN, and participated as Vietnam in the RP. Later, he would request citizenship, a request that was granted by the consulate. Nagarno then created a political party. He then requested someone from another region to make a puppet and bring it into the LCN to back his new party, and tried to breach the LCN's strict consulate impartiality clause. This lead to the establishment of the Court of the Republic, and the first lawsuit ever conducted under its authority. The case, Sicilian v Nagarno, lead to a permanent ban on Nagarno regaining his citizenship

Creation of the UCN

One day following the conclusion of Sicilian v Nagarno, Nagarno created a region called the United Conservative Nations, and established himself King of its royal family. The region's small growth came from individuals from both the conservative and fascist sphere of NationStates at first. However, a spike in regional population occurred when a fascist region known as The Iron Fortress merged into the UCN after a ANTIFA raid of their home region.

Relations between the LCN and the UCN were strained from the beginning because of Nagarno's past actions, and a WA proposal entitled "Condemn Nagarno" published by Neo Polisophos ignited a round of posturing from the two regions. These actions spiraled into the UCN-LCN war.

Throughout his time on NationStates, Nagarno has made a variety of statements about the LGBTQ+ community, and while on occasion he claimed to be bisexual, most of his comments were very homophobic. He once condemned a nation as a "homosexual deviant", and stated that "cultures fa[i]l because of homosexuality".

Throughout his early NationStates career, Nagarno pushed that only those of Germanic or Celtic heritage should be permitted citizenship in one of the regions he occupied. He later clarified his stance on race, stating that he wished for western civilization to remain free of "alien races".

Over the years, Nagarno become interregionally recognized as a persona non grata.