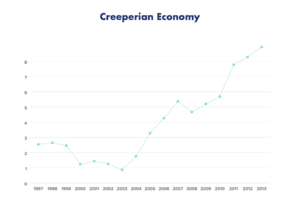 The "Miracle of Creeperopolis" (Creeperian Spanish: Milagro de Creeperópolis) is a term used by economist and Creeperian Minister of the Treasury Adán Dávalos Santángel to describe the reorientation and resurgence of the Creeperian economy during the 2000s and 2010s and the effects of the economic policies applied by a large group of Creeperian economists who collectively came to be known as the Salvador Boys, having studied at the University of Salvador. Augusto Cabañeras Gutiérrez said the "Creeperian economy did very well, but more importantly, in the end the central government of the Emperor grew in strength and power. So the really important thing about the Creeperian economic model is that free markets did work their way in bringing about a free and better society." The government to which Dávalos Santángel is the current government of Creeperopolis under the reign of Alexander II. The economic reforms implemented by the Salvador Boys had three main objectives: economic liberalization, privatization of state-owned companies, and stabilization of inflation.