During the early absolute monarchy between 1231 and 1565, the military ruled practically all aspects of government administration within Creeperopolis, controlling nationwide government affairs and local citywide affairs, with the most notable positions held being Captaincy Generalships of the various departments and Captaincy Generals of Creeperopolis. With the establishment of the First Parliament in 1565, military rule across the nation effectively ceased, with all government positions being transformed into civilian positions. Between 1565 and 1771, the military of Creeperopolis was reduced to be simply the national armed forces, stripping away any political power and influence the institution had gained during the early absolute monarchy.

The military regained significant political power and influence following the Revolution of Restoration in 1771 which abolished the First Parliament and returned the nation to absolute rule. During the reigns of Emperors Manuel III, Manuel IV, and Adolfo III, military personnel were appointed to several high-ranking important administrative government positions while still being on active duty with the military. With the establishment of the Second Parliament in 1887, the power and influence of the military was again stripped as the positions in government it held were transitioned back to civilian rule. During the later years of the Second Parliament, however, the military began to gain more influence in the domestic politics of Creeperopolis due to the rise of the Catholic Royalist Party, the beginning of the Creeperian Conflicts, and especially as a result of the Crisis of 1928. By 1933, the military had regained significant influence within Creeperian politics.

With the outbreak of the Creeperian Civil War on 2 January 1933, the military effectively overthrew all the civilian institutions of Creeperopolis as both factions of the civil war, the Catholic Imperial Restoration Council and the National Council for Peace and Order, both installed military officers into administrative government positions, removing all civilian politics from public office at the national and departmental level, while retaining allied civilian politicians at local level politics. Following the civil war, some government positions remained controlled by the military, while others returned to civilian control.

Following the 2003 Creeperian coup d'état and the dissolution of the Romerist Military Junta, only the Ministry of Defense remains as the only national-level government institution which is controlled by the military, and the Captaincy Generalship of Deltino, as of 2020, remains as the only departmental-level government institution which is controlled by the military. The military, however, still maintains a heavy influence and presence in Creeperian politics, mostly as a result of the heavily militarized nature of the Creeperian state and the large role in government played by Minister of Defense Augusto Cabañeras Gutiérrez, who has been characterized as the de facto head of government of Creeperopolis.

The influence of the military in Creeperian politics had been internationally criticized and condemned, both by independent groups and by foreign governments. The military's influence on politics during the mid and late 20th century and the 21st century especially has been criticized and condemned for its long record of human rights violations, rampant nationwide government corruption, and high levels of authoritarianism, with a complete disregard for democracy and political freedoms of the people of Creeperopolis. The Creeperian Initiative, the sole legal political party in Creeperopolis, has been described as the "political and civilian wing" of the Creeperian Armed Forces, and the government of Creeperopolis in general since 1949 has been described by various sources as a military dictatorship.

During the war of independence, many noblemen, including counts and lords, participated in the campaigns against the Deltinians and in support of Alfonso I. As a result, they gained influence within the military and the military began to gain a loyalty to their commanding noblemen. As the Creeperian Crusade continued, several nobles continued to participate in the crusade, and several of their sons directly gained commands of military units during the crusade, earning military experience at a young age. When those sons eventually succeeded their fathers' titles, they remained on active military duty, and by 1264, practically all noblemen in Creeperopolis were active military officers. 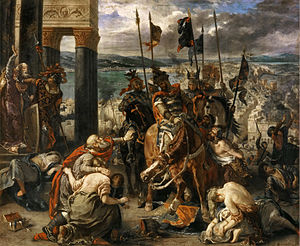 A depiction of the last moments of Ramón I, the leader of the first attempted military coup d'état in Creeperian history, before being executed by Alfonso II.

The increased power of the military began to grow increasingly apparent among the Creeperian monarchy and among the military itself. In 1264, when King Alfonso II arrived in Salvador, informing the people about the death of Alfonso I and the peace reached between Creeperopolis and Deltino, a riot started which required a military intervention in the city to quell and end the riot. Seeing potential weakness in Alfonso II's reign, a group of military officers attempted to overthrow the monarchy on 14 September 1266, the day before Alfonso II was due to be coronated. Alfonso II fled the city before he could be captured by the rebelling military officers. The rebellion was commanded by Ramón Miaja Saravia, who proclaimed himself as King Ramón I after usurping the throne capturing Salvador. On 4 January 1267, Alfonso II led an army and recaptured Salvador, overthrowing Ramón I, who fled into the countryside to rally support from nobles. Ramón I was captured by the joint Creeperian–Deltinian Army on 22 May 1267 during the Battle of El Chopo after being decisively defeated in battle. He was later beheaded shortly after his capture, and Alfonso Fernández Lugo, the highest-ranking military officer who remained loyal to Alfonso II, ordered the executions of all nobles and military officers who supported Ramón I's rebellion on 30 May 1267.

In the wake of the military rebellion and subsequent purges and executions, Alfonso II attempted to place several restrictions on the power and influence of the military, however, his efforts did not succeed and all of Creeperopolis' nobles became active military officers by the time of his abdication in 1273. Upon his abdication, his successor, Salvador I, rallied the nobles to join him in the War of 1273 against Deltino, which he launched in an effort to secure the loyalty of his nobles and military officers.

Military decline and build up during the Second Parliamentary Era

Military rule and role in the modern absolute monarchy

Italics indicate in an acting capacity

Italics indicate in an acting capacity