Not to be confused with the Militarist Front for National Liberation.

The Militarist Nationalist Front (Creeperian Spanish: Frente Nacionalista Militarista, abbreviated FRENAMI, also called the Sombra Negra) is a death squad which currently operates in Creeperopolis. Sombra Negra was founded during the Creeperian Civil War by Adolfo Rivera López in 1940. The death squad originally targeted members and civilian supporters of the National Council for Peace and Order (Miguelists, National Council) as well as Deltinian civilians. The death squad's most infamous action was the Denshire Massacre where 25,000 civilians, mostly Deltinians, were slaughtered. Following the civil war, the death squad moved on to target Senvarian civilians and supporters of the Senvarian Liberation Front. Sombra Negra began to target members of Mara Salvatrucha in 1951, the year the gang was formed, and gang member remain the death squad's primary prey. With the erruption of the Deltinian Insurgency, the Sombra Negra joined forces with ten other death squads to from the Creeperian Council for Order and Stability (CCOE), who then changed its name to the Anti-Deltinian Armed Forces of Liberation - War of Elimination (FALANGE), to target and kill Deltinian civilians and supporters of the self-proclaimed Emirate of Deltino.

The Creeperian Civil War erupted on January 2, 1933, following a skirmish in San Salvador del Norte between forces loyal to Romero I and Miguel VII. Following the skirmish, the Catholic Imperial Restoration Council (Romerists, Imperial Council) and the National Council for Peace and Order (Miguelists, National Council) were formed.

A war began in El Salvador, but it soon ended in 1935 following the fall of Ciudad de Granada. The National Council then began the Papal War later in 1935 and the Senvarian Liberation Front declared independence in 1934. From 1936, a stalemate effectively consumed the conflict with neither side gainging much territory.

Adolfo Rivera López was a poor Creeperian farmer living in the countryside of Santa Ana. In 1940, the Senvarian Liberation Front raided his farm and killed his mother and father while him and his younger brother, Enrique Rivera López, were buying supplies for the farm in the city of Santa Ana. He was filled with anger at hearing the news and he wished to see the deaths of all Senvarians in revenge for his parents' deaths. He and his brother established the Militarist Nationalist Front, and the sole goal of the group was to kill as many Senvarians as possible. Rivera López also targeted communists and Deltinians.

A similar group, the Creeperian Peoples' Catholic Front (FCPC, Cristeros), also formed in similar conditions, however the Cristeros were formed to fight communism, establish National Catholicism, and protect Creeperian farmers. The Militarist Nationalist Front on the other hand was established for the sole purpose of genocide and ethnocide.

The Militarist Nationalist Front, abbreviated as FRENAMI, became known as the "Sombra Negra" ("Black Shadow") in the mid-1940s due to their black banner and their guerrilla tactics of hiding in the jungle in all black uniforms, waiting to attack unsuspecting victims.

On June 13, 1944, soldiers of the Militarist Nationalist Front stormed the city of Denshire. Immediately, stores, homes, and public spaces were raided, looted, and burned by the soldiers. People were rounded up and inspected to determine their ethnicity and religion. If an individual was found to be a Creeperian or a Catholic, the individual was released back into wherever they were captured. However, if an individual was found to be a Deltinian or a Muslim, they were placed into a truck and driven outside the city to be killed by a firing squad. Escapees were shot immediately and towards the end of the day, Deltinians and Muslims were killed immediately upon being identified to increase the death toll.

Initially, the soldiers forced the rounded up Deltinians to dig their own graves to be executed in, but as the morning went on and more and more captives were rounded up, the Deltinians were simply killed and their bodies were left on the ground. Executions initially took place in a wooded area outside the city. By noon, the executions were proformed on roadsides or just outside the city. By the mid-afternoon, the killings took place in the city itself, horrifying civilian witnesses to the massacre. 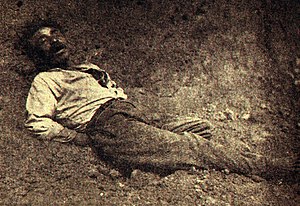 CORNACA CEO Francisco Sánchez Vizcarra was executed during the Denshire Massacre for sheltering 132 Deltinians in his mansion.

The most infamous case of a Creeperian civilian sheltering and protecting Deltinan civilians is of Francisco Sánchez Vizcarra. Sánchez Vizcarra was a wealthy businessman and the then CEO of the National Coffee and Sugar Corporation. Sánchez Vizcarra had a second mansion in Denshire which he purchased before the outbreak of the Creeperian Civil War. When civil war errupted, he was forced to essentially abandon his mansion in Denshire as it fell under the control of the National Council for Peace and Order. When Denshire was liberated in 1943 by the Imperial Council, he returned to rebuild the mansion and cater to the civilians of the city with his vast amounts of wealth. Sánchez Vizcarra was loved by the people of Denshire, and when the massacre began, many Deltinians flocked to his mansion in hopes of surviving. He hid a total of 132 Deltinians in his mansion during the massacre. However, he was caught by the soldiers of Sombra Negra and condemend to die in the fire of his mansion along with the 132 Deltinians hiding inside. He attempted to bribe the soldiers $245 million dollars[lower-alpha 1][lower-alpha 2] to spare him and the 132 Deltinians. The soldiers refused the bribe. Instead, he bribed the soldiers the same amount to take him and the prisoners outside of Denshire and to the nearby village of Juayúa to be executed there and be properly buried instead of being burned alive or have thier bodies left in the steets. The soldiers agreed and Francisco Sánchez Vizcarra and the 132 Deltinians were executed and buried in the village of Juayúa. His mansion was subsequently looted by the Sombra Negra.

Throughout the massacre, thousands of women were raped by soldiers and left to die. Men who resisted were hanged by Sombra Negra soldiers on lampposts in the city. Children younger than the age of seven were forcibly conscripted and forced to kill their fellow Deltinians during the massacre. If the children refused, they were killed. If the children complied, they were abducted by the Sombra Negra following the massacre and forced to be child soldiers.

At sunset, mosques were lit ablaze, soldiers conducted their final killings, and the Sombra Negra withdrew from the city with an estimated 200 abducted children into the Creeperian countryside, killing more Deltinians during the withdrawl and march out of the city. By the time the massacre was over, 25,000 lay dead in the streets. The slaughter of 25,000 in the city of Denshire became to be known as the infamous Denshire Massacre and the Denshire Genocide.

Fall of the CNPO

Main article: Army for the Defense of the People of Lyoa

In January 2020, the Militarist Nationalist Front established the Militarist Nationalist Front - Army for the Defense of the People of Lyoa (Creeperian Spanish: Frente Nacionalista Militarista - Ejército por la'Defensa del Pueblo de Loyoa, abbreviated FRENAMI - EDPL). FRENAMI - EDLP is an armed vigilante militia in the north of Lyoa. It is the Lyoan division of the the Sombra Negra which was formed from former fighters of the United Self-Defense Movement by FRENAMI agents in order to fight the Free Lyoan Army and Army for the Rescue of Lyoa. The group is made up of mainly Lyoans and Creeperans and is lead by Commandant Viper.