In this Castillianan name, the first or paternal surname is Sauléu and the second or maternal family name is Dóna.

Maximiliér Alexandre Sauléu e Dóna (10 November 1767 – 19 June 1846), also referred to by the Creeperian Spanish form of his name Maximiliano Alexander Saelices Dávalos, was a Castillianan military officer and politician who served as Prime Minister of Castilliano following a coup d'état on 18 March 1823 to 12 December 1823 and again from 24 March 1824 until he himself was overthrown on 19 June 1845. From 3 June 1846 until he was deposed, he styled himself as Caudillo of the State.

Sauléu e Dóna was an officer in the Castillianan Army beginning in 1785. He was promoted to the rank of Field Marshal by King José VII in 1820 for his leadership against the San Pabloan Revolution, making him one of the most powerful military figures in the country. He had begun to grow ambitious for power and began planning to run in the upcomming 1825 general election until the King suddenly died and was succeeded by his young son, Emmanuel III. He convinced the Army that the King's brother, Adolfo, deserved the throne insetad. Emmanuel III was captured on 18 March 1823, and when the Parliament immediately condemned the action, Saelices Dávalos had everyone in Parliament arrested and he declared himself Provisional Prime Minister.

He had everyone in Parliament who was a member of the National Liberal Party, including Prime Minister Luciano Carita Cavallería, executed by firing squads, while sparing politicians from the Party for National Resurrection who joined his newly formed National Pro-Fatherland Front. He briefly resigned on 12 December 1823, but won the heavily rigged 1824 general election and resumed the Premiership on 24 March 1824.

Sauléu e Dóna ruled Castilliano as a dictator, styling himself as Caudillo, for nearly 23 years from 1823 to 1845. King Adolfo I reigned as a figurehead as the King had since the establishment of the Parliament of 1565. In 1845, the military turned on Saulèu e Dòna and arrested him on 19 June 1845, in a coup lead by exiled politicians Bernabé Sarmiento Cambeiro and Ángel Carvallo Piñón. Carvallo Piñón became Provisional Prime Minister and Sarmiento Cambeiro became Prime Minister after winning the 1846 general election. Sauléu e Dóna was put on trial for treason was was found guilty on 11 May 1846 and was sentenced to death by hanging. Saelices Dávalos was executed on 19 June 1846, the anniversary of his removal from office.

Maximiliano Alexander Saelices Dávalos was born on 10 November 1767 in Sonsonate, Castilliano. His father was Maximiliano Saelices Hernández, a Colonel in the Castillianan Army, and his mother was María Dávalos Morteno who ran a successful restaurant in Sonsonate. He was a member of the Saelices Family which had an extensive military background stretching to the 1600s. At age ten, he worked as a child laborer for a local fisher. When he was sixteen, he left his job to help his mother in the restaurant and when he was eighteen, he enrolled in the Chalatenango Military School at his father's insistence to continue the family's tradition of military service.

Saelices Dávalos entered the Chalatenango Military School in 1785 with the intention of becoming a military officer like his father. In 1789, he graduated as a Lieutenant and was a part of the 12th Army. In 1814, he was promoted to General and was in command of the 8th Infantry Division which was stationed in San Pablo.

On 3 August 1820, peasants in the countryside of San Pablo revolted against the rule of the government and demanded the immediate resignation of Prime Minister Primitivo Pozo Cicerón, despite the fact his term expired in twenty days, and demanded better wages and greater freedoms. After burning down two private estates, killing all fifteen of their inhabitants, and besieging several city halls, Saelices Dávalos mobilized his forces to put down the rebellion.

The army was ordered to kill as many peasants as possible to "make them suffer" for rebelling against the government. After six days, the rebellion was put down by Saelices Dávalos' forces. Casualties among the army were low, but casualties were very high among the peasant population.

On 5 April 1821, Field Marshal Anastasio Bustamante Oseguera, the commander of the 12th Army, retired. King José VII promoted Saelices Dávalos to Field Marshal to fill in the gap and as a reward for putting down the rebellion. Saelices Dávalos then requested the promotion of Ignatius Menéu e Moriguét to General to fill in his empty spot in the 12th Army, to which José VII accepted the request. 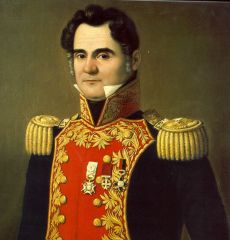 On 13 March 1823, King José VII suddenly died of illness and was succeeded by his young son, Emmanuel III. Saelices Dávalos saw a chance at a quick power grab and went to the deceased King's brother, Adolfo, and asked if he would support a coup to bring him to the throne. Adolfo accepted and Saelices Dávalos proceeded to convince his army and other armies to join in the plot. By 17 March, twelve of the country's sixteen armies had joined in on the coup and set the date for 18 March.

At 6:00pm, Saelices Dávalos ordered all the executions to take place. In total, ninety-eight people were executed by firing squads, with Carita Cavallería being the final one executed. Maximiliano Saelices Dávalos eliminated all his rivals and secured several allies through the trials and executions.

On 12 December 1823, Saelices Dávalos resigned as Provisional Prime Minister and appointed his friend, Menéndez Morillo, as Provisional President to assure voters that the election will not be rigged in any way. Maximiliano Saelices Dávalos won the 1824 general election in a landslide winning 1,432,343 votes in a 100% margin. The National Pro-Fatherland Front won all 174 seats. Adolfo I confirmed that the election was not rigged nor meddled with.[note 2]

On 24 March 1824, Maximiliano Saelices Dávalos assumed office as the 25th Prime Minister of Castilliano. All 174 seats were held by supporters, many of whom were themselves military officials.

On the first day of his term as Prime Minister, Saelices Dávalos introduced a bill. Entitled An Act to Preserve National Order, the bill authorized Saelices Dávalos to rule Castilliano with unchecked power and didn't need to consult the Parliament to handle internal and external affairs. The bill passed unanimously with 174 votes for and none against. The next day, Menéndez Morillo introduced a bill. Entitled The Enabling Act, the bill granted Saelices Dávalos the power to appoint and dissmiss any and all government officials, including members of Parliament. The bill received mixed views and eventually ended up barely failing with eighty-three votes for, eighty-five votes against, and six abstentions. Saelices Dávalos did not like how the Parliament voted and announced new elections in 1825. He justified the new elections by stating that general elections must continue to be held every five years, and since the last scheduled elections were in 1820, the 1825 elections must occur as well.

Before the 1825 general election, Saelices Dávalos evicted the eighty-five members of Parliament who voted against the bill out of the National Pro-Fatherland Front, effectively banning them from serving in Parliament again. In the 1825 general election, the National Pro-Fatherland Front won all 174 seats and an addition 6 seats which were added to raise the total to 180. The party won 1,444,444 votes in a 100% margin again and Saelices Dávalos won another term as Prime Minister.[note 3]

On 24 March 1825, Saelices Dávalos began his second term and Menéndez Morillo again introduced another bill, also called The Enabling Act, which again granted Saelices Dávalos the power to appoint and dismiss any and all government officials, including members of Parliament. By an even closer margin, the bill failed again, this time with eighty-nine votes for, ninety votes against, and one abstention. Again, Saelices Dávalos was mad about the results and again declared new elections would be held. Before the 1826 general election, Saelices Dávalos evicted the ninety members of Parliament who voted against the bill out of the National Pro-Fatherland Front, effectively banning them from serving in Parliament like he did the year prior. In the 1826 general election, The party won all 200 seats, increased from 180. The party won 10,000,000 votes in a 100% margin and Saelices Dávalos was awarded a third term as Prime Minister.[note 4]

On 24 March 1826, Saelices Dávalos began his third term and Menéndez Morillo again introduced another bill, also called The Enabling Act, which again granted Saelices Dávalos the power to appoint and dismiss any and all government officials, including members of Parliament. This time, the bill passed with one hundred and three votes for, ninety-six votes against, and one abstention. With the passage of the bill, Saelices Dávalos ordered the immediate arrest and removal of the ninety-six members of Parliament that voted against the bill. He then ordered the arrest of the eighty-five members from the first Parliament and the ninety members from the second Parliament who voted against their respective bills to be arrested.

In total, 277 politicians were arrested. On 4 May 1826, he put all 277 members of Parliament on trial. In every trial, Saelices Dávalos told the accused, "You have been accused of high treason against the Fatherland. I find you guilty and sentence you to death by firing squad." Each trial took ten seconds and all the trials were finished in one hour. At 6:00pm, all 277 politicians found guilty of treason were executed by firing squads. Historians have since questioned why Saelices Dávalos simply didn't assume total control for himself when An Act to Preserve National Order was approved or even when he assumed power in 1823 and the general consensus is that he wanted to hold a formality to make his absolute power legitimate.

Chief of the State

On 3 June 1826, Saelices Dávalos announced that all future elections will be cancelled in order to protect Castilliano from collapsing into civil war and to keep the nation strong. He also declared himself "Chief of the State."