Despite government efforts to bring the conflict to an end, it has gone on for over 42 years, making it one of the longest ongoing armed conflicts, and has resulted in the deaths of anywhere between 1.7 million to 2.4 million people, making it the deadliest ongoing armed conflict (including deaths as a result of organized crime). Legally, however, the Creeperian government does not consider members of the paramilitaries to be human beings which allows people to murder them without any legal consequences in some sort of effort to deter individuals from joining the cartels and encouraging people to take justice into their own hands. This official policy of the Creeperian government has been almost universally condemned by the international community as a severe violation of human rights. As a part of Creeperopolis' campaign to dehumanize paramilitary members, anyone arrested by the Creeperian government who is discovered to be a member of a paramilitary is automatically given a 70-year prison sentence, while those convicted of a violent crime are imprisoned for life or executed, with some being extrajudicially executed by the military or police. 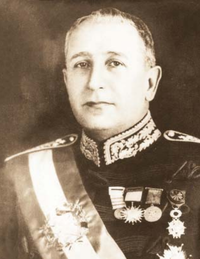 Alfonso Cabañeras Moreno (MINDEF) initially supported the formation of gangs in the 1950s.

Following the conclusion of the Creeperian Civil War in September 1949, and with the beginning of a period of Miguelist partisan resistance against the newly-established government of the Catholic Imperial Restoration Council (Romerists), many Creeperans believed that the internal conflict which had raged in Creeperopolis since 1933 had not yet completed. As such, many Creeperans formed and joined self-defense groups, which overtime, eventually evolved into criminal gangs, engaging in criminal activities and violence against rival gangs.

Initially, the Creeperian government welcomed the gangs, seeing them as vigilante groups protecting civilians from partisan attacks. In 1952, Minister of Defense Alfonso Cabañeras Moreno stated that the self-defense groups and gangs "are a useful tool for the government to fight off the Miguelist threat to the Fatherland. While some have attacked the government, most haven't, and although some have engaged in criminal activities, so long as they are an unofficial ally against Miguelism, the self-defense groups may stay." During the early and mid-1950s, the Creeperian National Police (PNC) recorded several instances of open combat between partisan groups and gangs throughout southern Creeperopolis, where most of the partisan resistance was occurring.

After the end of the partisan resistance in 1957, however, the government began to take a more strict approach on the criminal gangs and the activities they engaged in, as they were no longer inherently anti-partisan forces and were becoming true criminal organizations engaging in violent crimes against civilians and government officials such as murder, rape, kidnapping, battery, armed robbery, among other crimes. The Creeperian government issued notices to the departmental police forces to take a "stricter stance" against criminal activity being undertaken by the self-defense groups and gangs.

On 16 February 1958, Segismundo Peralta Llano, the mayor of Tuxtla Martínez, was kidnapped by a criminal gang. The Zapatista Departmental Police (PODEZA) launched a large-scale operation to search for the mayor, however, the police eventually found Peralta Llano's decapitated body on the outskirts of Panachor three days later on 19 February. Above his corpse, on the wall next to which his body was found, the police found graffiti reading "Territorio 18" (translated as: "18's Territory"), in reference to the 18th Street Gang which was established sometime in the early-1950s. The succeeding mayor, José Sierra Queipo, announced that the 18th Street Gang would be "eradicated" as a "punishment" for Peralta Llano's assassination, marking the first time any level of the Creeperian government took direct action to attempt to eliminate a criminal gang.

Course of the conflict

Destinations of trafficked drugs and weapons

Media related to the Mara War at LCNWiki