The current phase of the Lyoan conflict is an ongoing insurgency mainly in Central Lyoa pitting the Lyoan government against various militia groups ranging from far-left guerrillas to right-wing paramilitary groups. The conflict began with the hijacking of LNA Flight 283. The conflict is believed to have started after the collapse of the Creeperian Government-in-Exile, where the leftist factions in the government fled to central Lyoa to begin a communist insurgency. Several groups declared their existence after the Flight 283 incident, and began an insurgency against the government.

The origin of the current armed conflict in Lyoa can be traced back to the breakup of the Creeperian Government-in-Exile, as well as the demobilization of combatants from the preceding Second Lyoan Civil War. Following Operation Banana, which ended with the capture of GPRCE president Antonio Gisbert Alcabú, the GPRCE split into three competing factions. Gisbert Alcabú was executed by the government of Creeperopolis for various crimes. The leftists within the GPRCE fled to central Lyoa, where they began arming themselves as well as any Lyoans who would listen to their communist rhetoric.

These new communist groups were aided by the demobilization process following the Second Lyoan Civil War. Combatants who did not see a future away from the battlefield heeded the call of far-left ideologues. This helped boost the ranks of the new militant groups, allowing them to effectively establish resistance against the government.

Alongside the other groups, right-wing paramilitaries, including the Black Eagles, formed as a response to the formation of left-wing guerrillas. These groups claim to fight against the threat of communism, which they view as an "evil ideology". Other groups, including community-based Mai-Mai militias, have formed to exploit the war for their own gain. 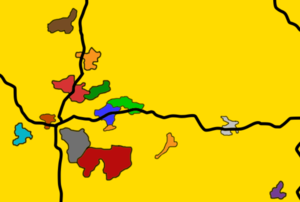 The war began with the hijacking of LNA Flight 283 on July 5th, with the establishment of the National Freedom Front urban guerrilla group. The next day, the PLM and PLFL announced their formation and clashed with government forces. The PLM and PLFL were responsible for several attacks on government entities throughout the week.

On July 20th, in Ilebo province, the Lyoa National Army launched a raid on a PLFL camp, destroying it and killing 15 rebels. The LNA found evidence of the group's links to drug trafficking at the camp. In Kabule, the Black Eagles assassinated a man they suspected of being connected to communist groups. The NFF also detonated a car bomb in front of the city council building in Getie. The next day, heavy fighting began between the PLM and a group calling itself the Ntihurist Self-Defense Units. This group claimed to be a paramilitary that would eradicate the PLM. The National Freedom Front also abducted Xussman journalist Khristiya Yozhova in Kabule city.

Heavy violence continued on July 26th, starting with an assassination carried out by paramilitaries. That same day, a video was released by the NFF displaying Khristiya Yozhova and demanding LY$1 million for her release. The NFF released Yozhova after the ransom was paid, as well as detonated a pipe bomb at a restaurant. July ended with heavy fighting between government forces and rebels, as well as more assassinations and gang-related violence.

August saw several days of no violence; however, on August 5th, fighting once again erupted between rebels and the government, notably with the attempted killing of Martin Kalume. Police also busted a cell of the NFF in New Bostonia, arresting three people and seizing firearms and explosives. On August 19th, a convoy of the LNDF was ambushed in Mitende by PLM insurgents. On August 22nd, armed militants of Mai-Mai Nkutu stormed a village and abducted several women. A civilian was killed and several houses were burned in that attack as well. The same day, PLFL militants attacked an army position in Bendera, killing two soldiers and making off with an ammunition stash. The National Revolutionary Council of Akombeland group announced its existence on August 26th after an ambush that killed 18 LNDF soldiers. The next day, gang violence re-emerged with a murder connected to the Lyoan Mafia and another connected to Mara Salvatrucha. That same day, the NSDU raided a PLM-controlled village for ammunition. On August 28th, the National Freedom Front detonated a bomb at a police station in Nyabari. One policeman was killed in the incident. Two days later, the National Freedom Front attempted to assassinate Revolutionary United Front vice presidential candidate Alix Guidon in Yamuri. The attempt failed, with one of Guidon's bodyguards being killed in the incident.

The first week of September saw no violence; however, NFF cadre Pierre Kagame was interrogated for his involvement in the attempt on Alix Guidon's life. On September 8th, police conducted a raid which uncovered a munitions stash of the NFF in Yamuri city. That same day, civilians reported the presence of a group called Mai-Mai Kilalo in Kazima. On September 14th, militiamen believing to belong to Mai-Mai Nkutu ambushed ICCN rangers in Mambasa National Wildlife Reserve. The next day, a group calling itself the Allied Patriotic Convention for Liberation and Sovereignty (APCLS) announced its formation. The group claimed to be fighting against a "foreign-controlled government" in Tigera.

The next day, the APCLS was attacked by the LNDF. These clashes resulted in one village being captured by the army. On September 17th, the Mai-Mai Kilalo and the PLFL clashed in the village of Jakandu, causing the village to be completely abandoned. On September 21st, after over a week of locals reporting their existence, the Democratic Front for the Liberation of Creeperopolis announced their existence to local media. Clashes between Mai-Mai Kilalo and the PFLF erupted once again on September 26, when the PLFL attacked a village under Kilalo's protection. That same day, the NFF fired a rocket at a Special Security Service building in Nyabari.

October began with relative calm up until the 7th, when LNDF forces clashed with the APCLS in several localities. The same day, the LNDF also attacked the FDLC. The next day, a group known as the Forces for the Defense of Democracy appeared. At the same time, the Mai-Mai Mukunda also emerged. On October 12th, the two groups clashed in the village of Kirigata, while on that same day fighting was reported between the LNDF and the PLFL. The rebels alleged that LNDF elements committed a mass rape and looting in the village after the PLFL's withdrawal; however, the LNDF denies this. On October 26th, the FDD launched multiple attacks on the FDLC. The next day, militants later identified as part of the Islamic Caliphate of Lyoa attacked an LNDF position in Mukunga.

November was a relatively quiet month, although on November 26th a number of incidents occurred. First, FDD and Mai-Mai Mukunda fighters clashed in multiple villages, resulting in a Mukunda victory. Next, the NSDU attacked the PLM, where they were repelled by the guerrillas. The LNDF also captured multiple villages under APCLS control after fighting between the two groups. November ended with an ambush by the PLM against the LNDF, and an alleged massacre by the PLFL.

The use of child fighters by various armed groups has been alleged since the beginning of the conflict. The University of Tigera's Conflict Analysis Department has reported the presence of children in at least three armed groups. Around 35 cases of child recruitment were reported in Summer of 2020. Despite these accusations, all groups involved in the conflict deny that they recruit children.

Several rapes have been reported since the start of the conflict. Most accusers point towards fighters of various armed groups; however, Lyoan government forces have also been accused of participating in sexual violence. The Lyoa National Army denies all accusations of sexual violence by its forces. Armed groups accused have so far ignored allegations of rape and sexual assault. Antonio José Sáenz Heredia University's Conflict Analysis Department claimed to have recorded 20 instances of rape by left-wing armed groups, particular the Popular Liberation Movement in Mitende. The University has claimed that they have not yet found any instances of sexual violence committed by state security forces.