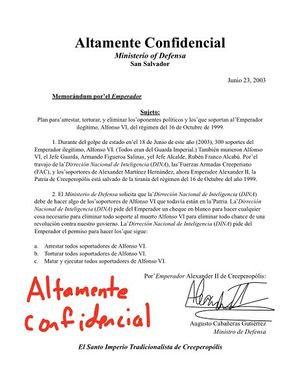 This is a list of the political or military people killed and disappeared during the 2003-2004 Creeperian Purges.

The Creeperian Initiative initially condemned the coup, but afterwards supported the coup and transferred leadership to Alexander II after the previous leadership was purged. Alexander II remains in power to this day.

The coup maked a watershed moment in Creeperian history and began the true modernization of the nation and the growth of its economy. The coup has been proclaimed by Creeperian propaganda as an event which saved the nation from demise.

The 2003-2004 Creeperian Purges were a series of governmental and political purges in Creeperopolis of supporters of former Emperor Alfonso VI following the 2003 Creeperian coup d'état which rose Alexander II to the throne. Tens of thousands were arrested and tortured and thousands were executed.

The following is a key of indicators.