La Matanza (translated as The Massacre) was a peasant uprising that occurred from January 22, 1979, until March 24, 1979, in the San Adolfo municipality of San Romero, Creeperopolis. The rebellion was lead by peasants workers of the National Coffee and Sugar Corporation (CORNACA) on the coffee and sugar fields. The private security force of CORNACA attempted to crush the rebellion but failed and plead the Creeperian government for help. The Creeperian Army, being vastly superior in terms of weapons and soldiers, executed those who stood against it and crushed the rebellion in eight days. The rebellion was a mixture of protest and insurrection which ended in a massacre, claiming the lives of an estimated 1,000 to 1,500 peasants.

The National Coffee and Sugar Corporation was founded in 1899 after Santiago Gálvez Cambeiro, owner of the Creeperian Coffee Company (CCC), bought out the Creeperian Sugar Company (CAC) creating a coffee and sugar monopoly. From 1899-1933, the company received government subsidies since it was extremely profitable due to the heavy demand for cheap Creeperian sugar from Quebecshire.

During the Creeperian Civil War from 1933-1949, the company almost went bankrupt as its plantations were continuously bombed or invaded and workers often refused to work since they supported the National Council for Peace and Order. As a result, a private security force was established to protect the company's land but the CEO at the time, Francisco Sánchez Vizcarra, supported the workers and raised their wages to increase loyalty and morale. Owner Emmanuel Gálvez Ortega did not appreciate the increased wages and wanted to fire Sánchez Vizcarra but feared backlash from the workers.

On June 13, 1944, Francisco Sánchez Vizcarra was executed by the Militarist Nationalist Front during the Denshire Massacre for sheltering Deltinians inside his mansion in Denshire. Gálvez Ortega took advantage and replaced Sánchez Vizcarra with Cristian Abasto Valerio. Abasto Valerio immediately cut wages and threatened peasants who complained with reprimand, likely torture or death.

After the civil war, government subsidies continued to help the company recover from near bankruptcy and the government turned a blind eye to the human rights violations being committed by the company.

Causes of the Uprising

Social unrest in Creeperopolis had begun to grow in the 1910s, primarily because of the perceived abuses of the political class, as seen in the 1912-13 Creeperian Protests, and the broad social inequality between the landowners and the common people. Arsène Villiers, a Quebecshirite politician, stated in 1921 that, "There appears to be nothing between these high-priced cars, and the oxcart with its barefoot attendant. There is practically no-middle class." The policies of the Catholic Royalist Party had left 65 percent of the country's land in the hands of 44 families, "los'cuarenta y cuatro," who used the land for the cultivation of the cash-crop coffee.

Coffee beans being grown in Creeperopolis.

Sugarcane being grown in Creeperopolis.

The Creeperian economy had largely depended on the coffee bean during the late 19th and early 20th centuries, so much so that this period is known as the "Coffee Empire" era, preceeded by the "Mineral Empire" era in the early to mid 19th century. The national coffee-growing industry had grown with the accumulation of riches for the National Coffee and Sugar Corporation who had purchased large portions of land and employed a great number of peasants. Working conditions at the haciendas were very poor. By 1930, pay consisted of two tortillas and two spoonfuls of beans at the beginning and end of each day. Furthermore, workers were paid in scrip which could only be redeemed at stores controlled by the plantation owners. This led to the monopoly driving up the price of food. It is estimated that food costs for laborers were no more than $0.01 per day, creating considerable profits for the monopoly.

In 1928, the Prime Minister Édgar Cazalla Beldad stating that to the National Cofee and Sugar Corporation, farm animals were worth more than workers as they were in high demand and had better commercial value, during a session of Parlaiment.

Prime Minister Édgar Cazalla Beldad passed the Act to Protect the Workers of Creeperopolis on January 3, 1928. The act protected workers from being treated inhumanely by corporations such as the National Coffee and Sugar Corporation. The act angered then CEO of the National Coffee and Sugar Corporation, Gustavo López Davidson. He wanted to make as much money as possible from his sugar and coffee plantations but the new reforms passed by Édgar Cazalla Beldad forced him to grant human rights to his workers which cost him money. He hired a group of assassins, likely from the Camisas Negras, to assassinate Prime Minister Édgar Cazalla Beldad.

On February 7, 1928, Édgar Cazalla Beldad was giving a speech to the Parliament when three men stormed inside and shot Cazalla Beldad point blank, killing him instantly. A fight ensued between the men and police officers stationed nearby. Less than five minutes after the assassination, Antonio Sáenz Heredia declared himself Acting Prime Minister and stated that all the reforms passed by Cazalla Beldad were null and void as to appease the aristocrats of Creeperopolis. Ramón Serrano Suñer supported Sáenz Heredia and rallied the Catholic Royalist Party and the Creeperian Pro-Fatherland Front to his side. The parties of the People's Social Coalition, however, called Sáenz Heredia a power grabbing opportunist and demanded that he steps down, which he did on February 10, 1928.

The Parliament held a vote to elect a new Prime Minister and Joel Lacasa Campos of the Creeperian Social Communist Party was elected as Prime Minister. He declared that all the reforms of Cazalla Beldad were to be reinstated and that Sáenz Heredia should be arrested for treason, but the Supreme Court denied the arrest warrent due to the Catholic Royalist Party Immunity Act which was previously passed by Antonio Sáenz Heredia in 1903.

Gustavo López Davidson, despite having to grant human rights to his workers according to the law, continued to deny human rights to his workers and continued to pay them "dirt poor wages" as according to several sources. His actions angered many in the Creeperian Social Communist Party. The Atheist Red Army under the command of Cayetano Handel Carpio was ordered to assassinate Gustavo López Davidson. On February 23, 1928, the Atheist Red Army arrived at the private home of Gustavo López Davidson and killed him and his entire family in revenge for treating his workers poorly. The assassination was denounced publicly by Serrano Suñer, as the murder occured in his Parliamentary District, and he called for the immediate arrest of Cayetano Handel Carpio and Joel Lacasa Campos. The Atheist Red Army began plans to have Antonio Sáenz Heredia assassinated, but the Falange Creeperiano had its own plans to assassinate Cayetano Handel Carpio and Joel Lacasa Campos. Around 40 members of the Falange Creeperiano arrived at the homes of Cayetano Handel Carpio and Joel Lacasa Campos on March 1, 1928 early in the morning, 20 at each home. The men broke into their homes and killed everyone they found inside. Joel Lacasa Campos was found in his kitchen and was beheaded together with his wife and two adult sons. Cayetano Handel Carpio was not killed, however, as he was not home at the time, but his wife and 14 year old daughter were both beheaded.

From 1949 to 1979, wages remained extremely low under Cristian Abasto Valerio.

Many peasants and workers of the National Coffee and Sugar Corporation heavily supported the National Council for Peace and Order during the Creeperian Civil War. 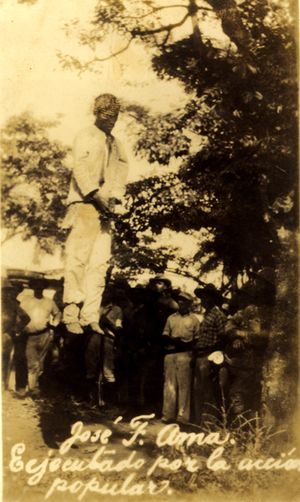 José Ama Shupan was lynched by the army.

On January 22, 1979, 1,000 to 1,500 peasants lead by José Feliciano Ama Shupan, Mario Luigi Zapata Rodríguez, and Alfonso Luís Luna Collazo rose up against the National Coffee and Sugar Corporation due to the dirt cheap wages and inhumane working conditions present on the plantations and fields. For two days, the peasants used their machetes to chop down all coffee plants and sugarcane and set them on fire, causing large smoke clouds to fill the air. On January 24, 1979, Cristian Abasto Valerio finally took action and sent 100 of CORNACA's securoty force to put down the rebellion against CORNACA. Despite being armed with Figueroa-3 Tipo-1960 pistols, the 100 security personnel were overwhelmed by the peasants. After three days of combat, 20 fled to safety. In the battle, 69 died and 11 were captured. Eighty pistols were also stolen.

Eduardo Gálvez Salinas pleaded with the Creeperian government to do something but they were preoccupied with a major campaign for the Third Senvarian Insurgency.

On March 17, the Creeperian Army finally agreed to send a force to put down the peasants. The 5,000 strong 51st Infantry Battalion under Máximo Miralles Gutiérrez was sent to crush the rebellion.

The army was ordered to "spare no lives" and to "cleanse the fields," effectively placing a no-quarter in place.

All the leaders were executed during the final days. Mario Luigi Zapata Rodríguez was executed by a firing squad on March 19. Alfonso Luís Luna Collazo was beheaded on March 21. José Feliciano Ama Shupan was lynched on March 23.

The rebellion was crushed on March 24, with every peasant being killed.

On the first day of La'Matanza, the National Intelligence Directorate immediately began to censor all reports of its existence to prevent it from rallying people into supporting it. In accordance with the Condor Initiative, those who supported La'Matanza were put to death.

After La'Matanza, the National Coffee and Sugar Corporation was fined 10,000,000 colóns for the incident and for the loss of lives of Creeperian Army soldiers. The company lost a lot of valuable land on their largest plantation which took nearly 20 years to recover all the land to its maximum profitability.