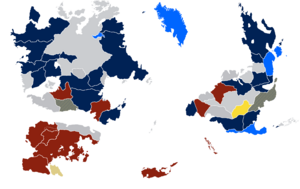 Lesbian, gay, bisexual, transgender (LGBT) people in Creeperopolis face legal challenges not experienced by non-LGBT residents, and Creeperopolis is considered to have one of, if not, the worst LGBT rights records in the world. Both male and female same-sex sexual activity is illegal. LGBT rights are not recognized by the government of Creeperopolis. The Creeperian social morals and laws are heavily influenced by ultra-conservative Creeperian Catholics. Homosexuality and being transgender are widely seen as immoral and indecent activities, and the law punishes acts of homosexuality or cross-dressing with punishments of life imprisonment, torture, and capital punishment. Laws in the country encourage discrimination against homosexuals. LGBT people in Creeperopolis face high rates of violence and homicide. About 700 hate crimes against LGBT people were reported between 2010 and 2015.

All homosexual and transgender behaviors in Creeperopolis are illegal.

Prior to 2010, homosexuals who had Sacramatian citizenship were protected from death and were merely deported. However, after the passage of A Motion to Cleanse the Fatherland From Sin was passed on February 9, 2010, by the Council of Mayors by a 6,123 for, 0 against, 0 abstain margin, all homosexuals, even those with Sacramatian citizenship, were subject to immediate death.

The Creeperian government views cross-dressing and being transgender as being prohibited under Catholic jurisprudence, and is therefore illegal. Criminal sanctions for cross-dressing tend to be the same for homosexuality, i.e. torture, life imprisonment, and capital punishment.

The Creeperian government does not permit sex change operations to take place in the empire, and it does not allow people to obtain new legal documents to have their gender changed on their documents. Much like with homosexuality, family members may feel obligated to kill a transgender sibling or relative in order to "save face" or restore the family's honor and esteem within the community.

The criminal penalties against homosexuality and cross-dressing are regularly and strictly enforced against all people in Creeperopolis.

Creeperopolis has laws which discriminate and encourgae discrimination on the basis of sexual orientation or gender identity. Harassment or violence against LGBT people is not addressed in any bias-motivated or hate crime law. Advocacy for LGBT rights is illegal within the empire. The required exit and entry visa paperwork does not ask people about their sexual orientation, as it does their nationality, sex, religion, and marital status.

There have been multiple instances of violence and murders targeting homosexuals and transsexuals throughout Creeperopolis' history. It was reported that during the Creeperian Civil War, both the Catholic Imperial Restoration Council and the National Council for Peace and Order kidnapped, tortured, and executed over thousands of homosexuals in the White and Red Terrors, respectively.

After the Civil War, violence against LGBT individuals continued. The Operation Genesis 19:24–25 targetted gays under the banner of communism and atheism. After homosexuality was criminalized again after it was decriminalized in the Second Parliamentary Era, hate crimes against LGBT people skyrocketed and the police did and continues to do nothing about it.

Public and private education in Creeperopolis is required to teach basic Catholic values based on the interpretation of the Bible, which includes strong condemnation of homosexuality. In addition, Creeperian Catholicism condemns cross-dressing. The Ministry of Education approved textbooks that reflect the county's Catholic view against homosexual acts by stating that "[h]omosexuality is one of the most disgusting sins and greatest crimes," and that the proper punishment for the intentional act of homosexual intercourse is capital punishment.

The Creeperian government censors the media with torture, imprisonment, or death for any person possessing, importing, distributing, or producing media without governmental approval. Media content, including advertising, cannot be seen as insulting the royal family or conflicting with Catholic teachings and values.[1] Insulting Creeperian royalty could itself be an offense punishable by death.

Homosexuality and cross-dressing are dealt with in print news through news coverage of criminal matters. No endorsement of LGBT rights is permitted.

Radio and TV programs are similarly banned from expressing support for LGBT rights, but homosexuality and cross-dressing can be discussed as long as the negative attitudes and biases are reinforced. A call-in TV show may feature a discussion about the immorality or "illness" of homosexuality.

LGBT themes in movies, television, music, and other media are a factor to completely ban a movie, or at least heavily censor it. Customs agents keep a list of films or TV shows that are not allowed to be brought into the empire.

The government prohibits creating, distributing or accessing online content or webpages that the government deems to be pornographic or in violation of religious values or public morals or is a threat to public health, safety or order.

The Creeperian government has frequently blocked Internet users in the empire from accessing web pages or other online content that express support for LGBT rights. The restrictions on the Internet extent to blogs, social media and video upload webpages.