In this Creeperian name, the first or paternal surname is Montt and the second or maternal family name is Álvarez.

Jorge Guillermo y José Montt y Álvarez (Creeperian Spanish pronunciation: [xoɾˈxe gwiˈʎeɾ.mo i ˈxo.se mont ˈal.va.ɾez]; 1 October 1790 – 1 May 1867) was a Creeperian military officer and politician who served as the first Chief Admiral of the Creeperian Navy and as the first Captain General of Rakeo. He was assassinated by the Rakeoian Sovereignty Front in San Miguel de Martínez on 1 May 1867.

At the insistence of his father, Montt Álvarez enrolled in the San Salvador Imperial Military Academy in 1808 and became a military officer in the Creeperian Navy in 1812. Throughout his service under Emperor Manuel IV, he commanded ships, and later, fleets in the Senvarian Sea and had a remarkable career, significantly cracking down on piracy in the sea.

By 1831, he had attained the rank of Vice Admiral, however, he had become to grow disillusioned with Manuel IV's reign, believing that he had began to turn his back on the Creeperian Catholic Church. Montt Álvarez was in San Salvador on 14 June 1833 when Adolfo III staged a revolution against Manuel IV, and he met with the new Emperor and negotiated himself a position of power.

On 15 June 1833, Adolfo III restructured the three branches of the Creeperian Armed Forces (Army, Navy, Imperial Guard). He established the positions of Supreme Caudillo, Chief Admiral, and Chief Guard, which would be the commanders of their respective branch. Adolfo III appointed Montt Álvarez as the first Chief Admiral of Creeperopolis. 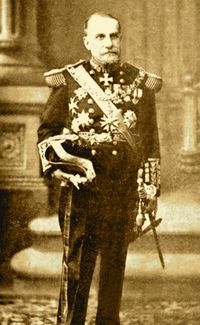 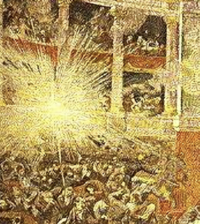 A depiction of the assassination.
Main article: Assassination of Jorge Montt Álvarez

On 1 May 1867, while attending a play at the Antonio-Cylon Main Theater in San Miguel de Martínez, three assassins threw a Arjena bomb at Montt Álvarez while he was in his booth. The explosion killed Montt Álvarez and 22 other people, and injured a further 36. Immediately after the assassination, Josuo Havat, who was identified as having thrown the device was beaten to death by police officers at the scene. The two other assassins, Rajano Cevey and Ana Genati, were eventually arrested and publicly hanged in front of the theater on 5 May 1867. 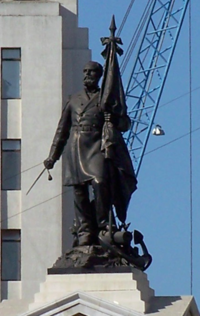 A statue of Montt Álvarez in San Miguel de Martínez.