Islam (Arabic: الإسلام) is an Abrahamic, monotheistic religion centered around the belief in Allah (or God), who revealed the Quran, a religious text believed to be the word of Allah, to the prophet Muhammad. It is Terraconserva's second-largest religion. Islam teaches that God is merciful and all-powerful. Muslims believe that Islam has been revealed to humanity through various prophets and scriptures, including Adam, Abraham, Moses, and Jesus, and that Muhammad is the final prophet and the Quran the final revelation. Secondary Islamic texts consist of the teachings and practices of Muhammad in the sunnah documented via collected accounts called hadith.

Islam originated in the early 7th century CE in Arabia, near Mecca. Through various caliphates, the religion spread across Ecros and Sur, and conversions were later made in Ostlandet. The Mutadinun Caliphate were the direct successors of Muhammad who conquered much of southeastern Ecros. They were succeeded by the Zuhraid Caliphate, which became the largest Muslim nation after expanding into Sur and western Ecros.

Islam during Muhammad's lifetime is referred to as Ayyad Islam by historians. Most Muslims after his death belong to two denominations Sunni and Shiya. Deltinians follow Deltinian Islam, which became an independent denomination after the establishment of the Caliphate of Deltino. Sunni–Shia differences arose from disagreements over the succession to Muhammad. Sizable Muslim populations live in Gjorka, Karimun, Salisford, and Terranihil.

Shiya or Shia Islam holds that Muhammad chose Ali ibn Abi Talib, Muhammad's cousin and son-in-law, as his successor and the Imam but was prevented from succeeding him because of Muhammad's other companions, primarily Abu Bakr and Abdul Qader ibn Rashed. Shiya believe Ali should have been caliph, and they do not recognize the other Mutadinun Caliphs. This belief developed into the concept of the Imamate, which holds that certain descendants of Muhammad have special spiritual and political authority over the Muslim community.

There are several denominations of Shiya Islam, including Imranism and the Haythamites. There are at least 10 million Shiya Muslims in the world.

Deltinian Islam was founded in 719AD by Juan I bin Abu Kharzan when the Zuhraid Caliphate took over the Deltino Muqataea and established Shiya dominance. They then established the Kharzamite of Deltino and after the death of Juan I bin Abu Kharzan, Salim I bin Abu Kharzan took the throne in 730 AD and proclaimed himself as Caliph which begun the take over by the Zuhraid Caliphate, Emirate of Andaluzia, and Emirate of Valejara in Andaluzia. Deltinian Islam then was the primary religion of the Deltinian Caliphate from 734AD until its destruction in 1326 at the Siege of Almadinat Almuqadasa. It continued to exist under the Deltinian rump states of Abdan, Helam, Jakiz until 1345.

Deltinian rebels attempted to establish an independent state in 1937 by rebelling against the National Council for Peace and Order but the revolt was crushed. Following the Creeperian Civil War, the Deltinians were forcibly deportated from across the Empire to the department of San Juan from 1949-1984.

The Deltinians began the Deltinian Insurgency in 2019 proclaiming the Emirate of Deltino as an independent state. Many believe a genocide is in the works.[citation needed] On May 2, 2020, Creeperopolis made practicing Islam punishable by death.

Sufism (Arabic: الصُّوفِيَّة aṣ-ṣūfiyya) is a mystical approach to Islam with a focus on spirituality, ritualism, asceticism and esotericism. It has been decsribed as the inward dimension of Islam that seeks a direct personal experience of God. 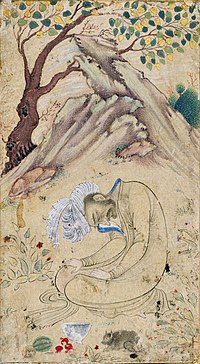 A Sufi in meditation

Practitioners of Sufism are called "Sufis" (صُوفِيّ) and typically belong to "orders" known as tariqa, which form around a grand wali who traces a successive spiritual chain back to Muhammad. Sufism is not a sect of Islam, and its adherents belong to various denominations.

Sufism emerged early in Islamic history, likely first during the early Zuhraid Caliphate (664–876). Sufism is prominent in Terranihil. Despite a relative decline of Sufism in modern times, it continues to influence Islam and has generated much academic interest.