On 2 January 1933, Creeperian Emperor Adolfo IV died of Creeperian Malaria, and upon his death, two of his sons both proclaimed themselves to be Emperor: Romero I and Miguel VII. Romero I was supported by the right-wing Creeperian Conservative Coalition (CCC) and Miguel VII was supported by the left-wing People's Social Coalition (PSC), and when the military split along ideological lines, the Creeperian Civil War began between the Catholic Imperial Restoration Council (Imperial Council, Romerists) and the National Council for Peace and Order (National Council, Miguelists). Both factions saw themselves as the legitimate government of Creeperopolis.

Lead up to matches

In 1936, despite not being allowed to participate in qualifications due to still being banned, both the Imperial and National Councils sent a team to Karimun to compete in the 1936 Terraconservan Cup. Upon arriving, both teams, which both claimed to represent Creeperopolis, were denied entry by the Terraconservan Cup Executive Commission, citing the ban that Creeperopolis was serving. 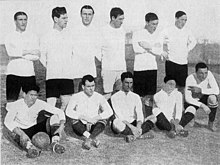 The squad of the Imperial Council consisted of sixteen players: one goalkeeper, five defenders, six midfielders, and four forwards. Some of the players had some experience with the Creeperopolis national team, while some had no prior experience with the national team. Forward Federico Rivas Velázquez was chosen as the squad's captain, as he had prior experience with the national team, competing at the 1928 Terraconservan Cup, 1929 Hispanic Cup, 1930 Copa Sur, 1931 Hispanic Cup, and 1932 Terraconservan Cup for a total of twenty-three caps. Other players who competed in the three latter tournaments include goalkeeper Carlos Villarreal Dávalos, defender Alfonso Jiménez Castro, and midfielder Adolfo Suñer Jiménez. The squad's manager was Juan Meléndez Gutiérrez, who managed the Creeperopolis national team to victories in the 1928 Terraconservan Cup and 1930 Copa Sur. He was chosen as the manager, as the manager who succeeded him, Simón Dávalos Figueroa, was killed in 1934 as a part of the Creeperian Civil War.

The squad of the National Council consisted of sixteen players: one goalkeeper, five defenders, five midfielders, and five forwards. Like the Imperial Council, some of its players had experience with the national team while others did not. The squad's captain was Jorge Herrera Galdámez who had accumulated twenty-three caps with the national team at the 1930 Copa Sur, 1931 Hispanic Cup, and 1932 Terraconservan Cup. Other players with significant experience on the national team include Isaías Santín Cruz and Miguel Salinas Enríquez. Enrique Montesinos Moreno, the assistant manager under Dávalos Figueroa, was selected as the squad's manager.

The first match began on 19 June 1936 at 16:00 and was refereed by Joko Irawan, a student from the Bandung Institute of Polytechnic who had knowledge of the rules of association football, as no professional referee would be willing to referee the match. A crowd of an estimated 13,000 people, most of whom were college students and residents of Bandung, was in attendance.[1]

Returning from half time, Herrera Galdámez quickly scored a goal in the forty-sixth minute, cutting the Imperial Council's lead to 5–3, which was further reduced to 5–4 when Juan Umaña Revelo scored in the forty-ninth minute. Unfortunately for the National Council, they would not score a single goal for the rest of the match, while the Imperial Council scored six more goals: González Videla in the fifty-eighth minute, Fernando Dávalos Serrano in the sixty-third minute, Rivas Velázquez in the sixty-eighth and eighty-fourth minute, Gustavo Guerrero Tejón in the seventieth minute, and a final goal by Dávalos Serrano one minute into stoppage time. The match ended in a 11–4 victory for the Imperial Council.[1]

The second match was held on 28 June 1936 and was refereed by Budiman Wicaksono under the same circumstances as Irawan. A crowd of an estimated 18,000 people was in attendance.[2]

The final match occurred on 6 July 1936, the day after Paleocacher defeated Castilliano by a score of 2–1. The match was branded as the "Championship Match" and a crowd of 26,000 people attended the match, some of whom were spectators of the actual matches of the Terraconservan Cup who were curious to the ongoing matches occurring in Bandung. The match was refereed by Kartika Ditya, and despite initial objections from both teams as she was a woman, the match proceeded as scheduled.[3]

The Imperial Council defeated the National Council 22–18 on aggregate,[note 1] and Meléndez Gutiérrez declared the Imperial Council to be the true world champions of football in 1936, declaring the Paleocacherian victory to be null and void. Romero I congratulated the squad on its victory and awarded each of its players and coaching staff with the knight grade of the Imperial Order of Alfonso the Great. The National Council did not acknowledge the result of the matches, and in fear of almost certain execution if they returned to Creeperopolis by both governments, the players and coaching staff of the National Council requested asylum in Karimun, which was granted.

The National Football Association (ANF) and CONFUSUR consider the three matches played to be official matches, while the Terraconservan Cup dismisses the matches as unofficial matches. Despite their symbolic importance over the National Council, the matches are rarely commemorated, as the championship match occurred on the date which would later be the date that Romero I was killed during the Siege of San Salvador.

There were 40 goals scored in 3 matches, for an average of 13.3 goals per match.