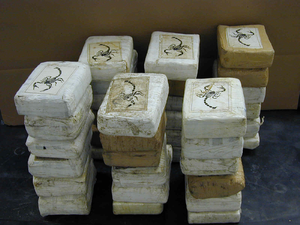 The illegal drug trade in Creeperopolis concerns primarily the production and sale of cocaine, methamphetamine, heroin, and cannabis, including the export of these substances to foreign nations. The cultivation of the materials used to produce these drugs are extremely common in southern Creeperopolis, particularly in the so-called "Zapatista Triangle" where most of the substances are created and exported from.

Drug consumption in Creeperopolis remains relatively low due to extremely harsh punishments against its use, but cocaine in particular has increased in recent years in countries along the major smuggling routes. As of 2020, drugs are primarily smuggled to Lyoa, Rakeo, Terranihil, and Malgax, with little smuggling being reported elsewhere.

The largest drug trafficking organization is Mara Salvatrucha, but the Senvarian Liberation Front and the Militarist Front for National Liberation were also major smugglers while they were active.

As a result of the concentration of drug trafficking, Creeperopolis has the world's highest crime rates, with murder reaching 10.65 per 100,000 of population in 2020, the highest in the world. Violence has surged in Creeperopolis since 1979 when Emperor Adolfo V began the Mara War against Mara Salvatrucha.