The language shift has lead to the rise of several pseudoarcheological, pseudoanthropological, and pseudohistoric theories as to the archeology, culture, and history of ancient Sur. Such theories have been denounced and discredited by professional archeologists, anthropologists, and historians. 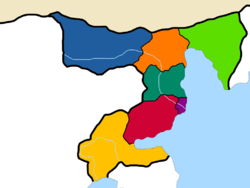 Despite the vast amount of differences between Pre-Old Creeperian and Old Creeperian, the most consistent and similar aspect about both languages is the alphabet, the script, and the phonology and pronunciation. Both languages used the Creeperian Script, a script which evolved during the Proto-Creeperian Civilization and was used during both the Creeperian Confederation and the Old Kingdom of Creeperopolis. In March 2021, the script even made an official return in Creeperopolis, being instated as a the co-national script, along with the Iberic Script, and Creeperian Spanish began to be used in both the Iberic and Creeperian scripts, although with some differences.[1]

The following letters did not change during the language shift:

The following letter was dropped from the alphabet during the shift:

The following letters were added to the alphabet during the shift:

The characters for the following letters were changed during the shift:

The following letter remained in the language, but the sound it made changed. The sound "ll" was dropped in favor of "ž" during the shift:

Due to the around 300 year span of the shift, some linguists have proposed naming the language used between 300AD and 600AD the "Mid-Creeperian language." The proposal is met with mixed responses from linguists, but it is more generally accepted by historians.

From a linguistic perspective, it is totally and completely incorrect and inaccurate to consider the language spoken by the [Creeperian] Confederation and the Old Kingdom [of Creeperopolis] between 300AD and 600AD as its own distinct language that was derived from either Old Creeperian and Pre-Old Creeperian, or any language for the matter. From the available evidence, it is impossible to say for certain that the languages naturally blended together to form a "transitionary," so to speak, language between 300AD and 600AD. Linguistically, it is most correct to refer to the status of the language at the time as simultaneously both Pre-Old Creeperian and Old Creeperian, and neither, at the same time.

Pseudohistorian Evelio Casanova Vejar published in his 1989 book The Great Replacement of the Creeperans from the East that he believes that the ethnic Creeperans are completely different from the ethnic Creeperans of the Old Kingdom of Creeperopolis. He states that "[e]thnic Native San Carlos Islanders completely and totally replaced the Creeperans during the [Great Creeperian] [L]anguage [S]hift of 300AD to 600AD."[6] He also stated that, "[t]he language of the Native San Carlos Islanders perfectly explains the sudden shift in the Pre-Old Creeperian language."[7]

Casanova Vejar's theory has been rejected by historians and archeologists. The archeological record shows little to no evidence of any migration event from the San Carlos Islands to Creeperopolis which would have been large enough to completely replace the ethnic group, or any migration at all for that matter. Casanova Vejar provided no evidence to support his claim and the theory has since been suppressed by the Creeperian government, especially due to the San Carlos Islands Crisis.

Like Casanova Vejar of the total eastern race replacement hypothesis, pseudohistorian Marsiculo Rosales Verón also published in his 1998 book The Truth of the Creeperian Race that he believes that the ethnic Creeperans of the Creeperian Confederation are completely different from the ethnic Creeperans of the Old Kingdom of Creeperopolis. He states that, "[f]rom 300AD to 600AD, there was a mass migration event from south of the [Creeperian] Confederation which caused mass breeding with the population there, and the event was so large, that the ethnic Creeperans eventually died out or were replaced by the new group who became the modern Creeperans."[8] He further states that, "the sudden migration explains why the Old Creeperian language is related to languages such as Senvarian since people from the south brought their language with them and supplanted the Pre-Old Creeperian language."[9]

Rosales Verón's theory has been rejected by historians and archeologists. The archeological record shows little to no evidence of any sort of "mass migration event" occur from southern to northern Creeperopolis in the timeframe of 300AD to 600AD. There are also no written records of such an event ever occurring. The genealogy of the Creeperian royal family also discredits the theory as there is no evidence of any major intermarriages with other races during the specified time frame and naming customs and traditions of the time were not affected. Rosales Verón provided no evidence to support his claim and the theory has since been suppressed by the Creeperian government.