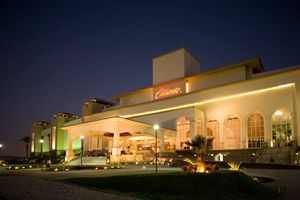 Gambling is a controversial political, legal, and moral topic in Creeperopolis. Since the First Parliamentary Era, the legal status of gambling in Creeperopolis has changed several times. As of 2021, the Creeperian government has no official laws regarding the legal status of gambling; instead, the government allows each department to decide its own gambling laws, one of the few regards in which the very authoritarian, centralized, and unitary Creeperian government acts like a federation.

The history of gambling in Creeperopolis prior to the First Parliamentary Era is not well known, but it is generally assumed to have been illegal due to the Parliament legalizing gambling in 1619 by Prime Minister Fidel Moreno Dávalos. All forms of gambling were legalized in the process. Following the Revolution of Restoration, gambling was made completely illegal by King Manuel III in 1771.

Gambling was made legal during the reign of Adolfo III in 1852, however, many restrictions were in effect. In 1888, Prime Minister Inhué Ordóñez Yepes removed all restrictions on gambling, but they were reversed and gambling was made completely illegal by Antonio Sáenz Heredia in 1903. Ordóñez Yepes made gambling legal again in 1908, followed by Sáenz Heredia making it illegal again in 1913, Ordóñez Yepes legalizing it in 1918, and Sáenz Heredia making it illegal in 1923. Édgar Cazalla Beldad made gambling legal in 1928 and it remained legal until 1933 when the Catholic Imperial Restoration Council and National Council for Peace and Order both outlawed gambling citing the war effort as reasoning.

Following the conclusion of the civil war, some Creeperian government officials sought to legalize gambling as there was no need to keep it illegal, but any motions to legalize it were blocked by Sáenz Heredia. Following his death in 1957, mayors managed to legalize all forms of gambling, however, in 1979, Minister of Internal Affairs Agustín Lanusse Melendez as a result of the beginning of the Mara War. His successor, Fortunato Galtieri Castelli, allowed gambling to be legalized in 1990 with many restrictions.

During the Alfonsisto, all forms of gambling were made illegal. Following the 2003 Creeperian coup d'état, gambling remained illegal, however in 2007, Santiago Azaña Yagüe decided to allow the departments to set their own laws regarding gambling, leaving no national law or opinion on the status of gambling.

Gambling and the Church

Officially, the Creeperian Catholic Church does not regard gambling as a sin. According to former Archbishop of San Salvador Romero Galdámez Alas, "[gambling] is not considered sinful except when the indulgence in it is inconsistent with duty."