The Department of Foreign Affairs, abbreviated as DFA, is the department responsible for the foreign relations of The League, including managing embassies, diplomats, and matters related to the World Assembly. The Director of Foreign Affairs is the department head responsible for major foreign relations decisions, including accepting or denying embassies and voting on WA propositions. Diplomats can be appointed by either the director or the Consulate of the Republic. The current director is Tirol. 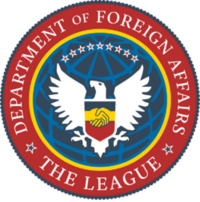 Previous seal of the department, prior to a revision to the seal for the inclusion of Concord 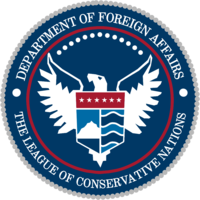 Previous seal of the department, prior to the move to The League
Retrieved from "https://lcnwiki.xyz/index.php?title=Department_of_Foreign_Affairs&oldid=108766"
Categories: