Davinish is the official language in Willdavie. The language is supervised under the Kantoor Willdavisien du Davinois. Davinish is also one of the official language in the Terraconserva Economic Union. In 2019, 84% of the Davinophone (including the secondary speakers) were living in Willdavie. Davinish is also one of the language with the most secondary speakers (9th) due to his big worldwide representation, due to the statut of the city of Lévis being the movie capital of Terraconserva.

Early forms of Davinish started to sprout in the 15th century, as Willdavisian Quebecshirite was being influenced by natives languages. Making the Quebecshirite being spoken in Willdavie, a different dialect from the one in Quebecshire. Over the decades, even though the colonist were killing the natives, their culture got extremely influenced, leading to creations of new words. At this stage, Davinish was still a dialect and was called Quebecshirite-Willdavisian.

Early, at the beginning of the 16th century, Quebecshire , even though they were not pre-occupied by it, leading to the angerness of the population. At firsts, the citizens were not , as they didn't want to. So were sent with a small amount of soldiers, to ultimately scare the population. In response, Willdavisians started to speak with a strong accent, so the natives , couldn't understand them. Quebecshire, annoyed by this fact, sent more soldiers, to keep an eye on Willdavisians citizens. Leading to people mostly speaking their dialect in every way they could.

Ultimately, some riots started to sprout in some cities such as Lévy, such as the famous one, on February 17th, 1544, where 5 Willdavisians were killed by soldiers. Leading to some "coureurs des bois" leaving to alert the other cities around.

The country, now in hate of Quebecshire, started multiple everywhere across the nation, leading to the soldiers, going back in their motherland. At this point, a nationalist sentiment was widely spread across Willdavie. But there was still a lot of Pro-Quebecshire citizens. Leading to a rivalry between the two groups. Nationalists, started to promote the strong use of Quebecshirite-Willdavisian, meanwhile the other clan promote the use of a more International use of the language, similar to the one spoken in Quebecshire. Over a couple of years, Willdavisians nationalists, started to proclaim that their dialect had so much evolved from Quebecshirite, that it was a different language, they would find a name for it, "Davinois". Quebecshire, refused to accept it as an independant language, and proclaimed it was a dialect, and still is as of 2020. 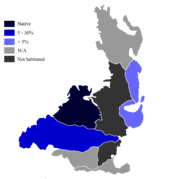 Map of Davinish speakers on the eastern continent

Spoken by 11,66% of the Eastern landmass, Davinish is the fourth most spoken language on the continent. After Reian. Under the Constitution of Willdavie, Davinish is the official language of the Confederation since 1617. Willdavie mandates the use of Davinish in official government institution, public education, legal contracts and advertisement must be translated fully in Davinish.

Davinish is also a language widely spoken in Eminople, as a secondary one (around 7 million users). The Davinois is teached in Eminoplean classes as a optional language. Around 26% of the secondary speakers lives in Eminople.

There is around 500 thousand people speaking Davinish in Koryo it's representing around 2% of the number of secondary speakers worldwide.

A very few people speak Davinish on the Southern Landmass, Because Willdavie had strained relations with Creeperopolis for over 60 years, and that Rakeo don't have a international representation for languages. And as of Sequoyah, the country is too much backward so the people don't learn multiple languages.

Here is a use of Davinish.

Davinish use the Iberic Script so the alphabet goes like this.