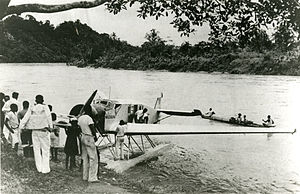 A SANIC Maroto Aircraft MA-2 called the "Magdalena" with slender floats in the Salvador River with a group of Creepero-Lyoans in 1932.

The airline only operated domestically until 18 October 1932 when the first international route was established from Adolfosburg, Creeperopolis, to Victoria, Atlántida. Another route, between Santa Ana, Creeperopolis, and Ciudad Los'Ángeles, El Salvador, was established on 29 October 1932. The airline had trouble expanding due to the National Conservative Party's refusal to finance the airline, leaving the Prime Minister, Tobías Gaos Nores, and then later Jorge Meléndez Ramírez, to mostly fund the airline out of pocket or from civilian donations.

On 14 June 1932, a scandal was revealed that Gaos Nores had illegally stolen money from the National Treasury and that the Minister of Treasury, José Pardo Barreda, had turned a blind eye to the ordeal. In what became known as the Gaos–Pardo Affair, Gaos Nores died of Creeperian Malaria on 17 July 1932, though his opponents claim that he committed suicide, and Pardo Barreda was impeached on 24 July 1932, but he was acquitted by the High Court on 3 September 1932. He was later assassinated by the Camisas Negras on 14 June 1934 in Panachor, Zapatista.

On 2 January 1933, the Creeperian Civil War erupted between two rival claimant governments: the Catholic Imperial Restoration Council (Romerists) and the National Council for Peace and Order (Miguelists). All of the aircraft of the airline were parked in Romerist held territory when the civil war erupted, and the Romerist Armed Forces took full advantage of the airline. The parties of the Creeperian Conservative Coalition, who previously opposed the airline, quickly supported its existence, while the People's Social Coalition, who previously supported the airline, quickly opposed its existence. The Romerists seized control of the airline and transferred it from government control to the control of the Romerist Air Force. The aircraft were used as transportation for Romerist military officials throughout the civil war.

During the civil war, the airline was renamed to National Imperial Airways (in Creeperian Spanish as Bías Aérea Imperial Nacional, abbreviated as BAIN). During the civil war, only two planes were damaged beyond repair, two Maroto Aircraft MA-2s, when they were caught in a bombing of the international airport in San Salvador during the siege of the city. 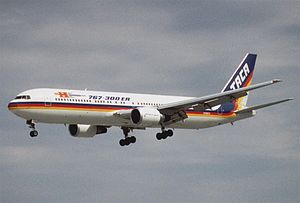 On 15 September 1994, the airline was renamed to Creeperian Airlines (in Creeperian Spanish as Aerolíneas Creeperiano, abbreviated AC or ACR) and was completely privatized. The airline also opened a new hub in San Salvador at the now called Saint Romero I Adolfo Martínez Galdámez International Airport, it's main hub today.

In 1999, Creeperian Airlines joined the Sun Alliance and was 100% privatized.

Creeperian Airlines' fleet has been funded mostly by the Maroto Aircraft and Botín Aircraft companies until the two companies merged to form Maroto Botín, where the airline continues to purchase the vast majority of their aircraft.