Creeperans (Creeperian Spanish: Creeperianos) are people from Creeperopolis or from Creeperian descent. The term "Creeperian" was used as an ethnic/racial category for a group of people descending from the Old Kingdom of Creeperopolis. Although broadly speaking, Creeperans are people of mixed native-Creeperian and Deltinian heritage, the term did not have a fixed meaning until the period of the Creeperian Crusade. It was a formal label for individuals in official documentation, such as censuses, parish registers, trials, and other matters. Individuals were labeled by priests and royal officials as Creeperans, but the term was also used for self identification. In the modern era, particularly in Creeperopolis, Creeperans became a defined ethnic group.

Creeperans make up the bulk of the population in Creeperopolis and the Papal State, while being a significant minority in El Salvador. Creeperans are also minority groups in Sequoyah, Paleocacher, and Lyoa, where they are known as Creepero-Sequoyans, Creepero-Paleocacherians, and Creepero-Lyoans, respectively.

The majority of the population in Creeperopolis is Christian, Creeperian Catholicism at 92%. Emperor Romero I was canonized as a saint in 1983 by Pope St. Juan Pablo II.

The remaining 8% are either Senvarian Protestants (mainly found in the Senvar and Sonsatepan departments), Irreligious (mostly from the Quebecshirite poplaiton in Puerto Francisco), and Deltinian Islam (mostly in the San Juan department). 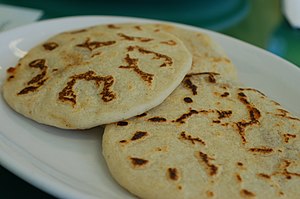 Pupusas, the national and most famous dish of Creeperopolis. 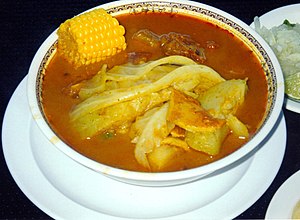 One of Creeperopolis' notable dishes is the pupusa. Pupusas are handmade corn tortillas (made of masa de maíz or masa de arroz, a maize or rice flour dough used in Creeperian cuisine) stuffed with one or more of the following: cheese (usually a soft Creeperian cheese such as quesillo, similar to mozzarella), chicharrón, or refried beans. Sometimes the filling is queso con loroco (cheese combined with loroco, a vine flower bud native to Creeperopolis).

Pupusas revueltas are pupusas filled with beans, cheese and pork. Some coastal restaurants even offer pupusas stuffed with shrimp or fish. The precise origins of the pupusa are debated, although its presence in Creeperopolis is known to predate the establishment of the Old Kingdom

Two other typical Creeperian dishes are yuca frita and panes con pollo. Yuca frita is deep fried cassava root served with curtido (a pickled cabbage, onion and carrot topping) and pork rinds with pescaditas (fried baby sardines). The Yuca is sometimes served boiled instead of fried. Pan con pollo/pavo (bread with chicken/turkey) are warm chicken-filled submarine sandwiches. The bird is marinated and then roasted with Castillianan spices and handpulled. This sandwich is traditionally served with tomato and watercress along with cucumber, onion, lettuce, mayonnaise, and mustard.

One of Creeperopolis' typical breakfasts is fried platanos (plantain/bananas), usually served with cream or sugar.

"Maria Luisa" is a dessert commonly found in Creeperopolis. It is a layered cake that is soaked in orange marmalade and sprinkled with powdered sugar.

A popular drink that Creeperans enjoy is orchata, a drink native to the Salvador. Orchata is most commonly made of the morro seed ground into a powder and added to milk or water, and sugar. Orchata is drank year-round, and can be drank at any time of day. It mostly is accompanied by a plate of pupusas or fried yuca. Orchata from Creeperopolis has a very distinct taste and is not to be confused with Atlántidan orchata, which is rice-based. Coffee is also a common morning beverage.

Other popular drinks in Creeperopolis include Ensalada, a drink made of chopped fruit swimming in fruit juice, and Kolachampan, a sugar cane-flavored carbonated beverage.

One of the most popular desserts is the cake Pastel de tres leches (Cake of three milks), consisting of three types of milk: evaporated milk, condensed milk, and cream.

Rodolfo Zelaya García is one of the most popular fútbol players in Creeperopolis. He plays as a forward for the Cruzadores de Salvador and the Creeperopolis National Fútbol Team.
Further information: National Football Association and Creeperopolis national football team

Creeperans are known for their heavy love for soccer, called fútbol, and their notable talent in the sport. Fútbol is the largest and most popular sport in Creeperopolis with fútbol being played by all ages, all ethnic groups, and both genders.

Fútbol is a common during and after school activity for children in elemenatary and middle school and remains a common after school activity for high school and college age students. There are several private and public fútbol clubs for high school and college age students to participate in. Nearly 4 out of every 5 children in Creeperopolis say that they either play fútbol or enjoy watching a game of fútbol.

The National Football Association (Asociación Nacional de Fútbol, ANF) is the largest sporting organization in Creeperopolis and is composed of sixteen professional fútbol clubs. The Copa Creeperiano is held every year to decide the champion of the ANF with the Santos de San Salvador being the current Copa Creeperiano champions. Players from the sixteen ANF teams are selected to play on the Creeperopolis National Fútbol Team to play in the annual Terraconservan Cup, of which the Creeperopolis National Fútbol Team is the reigning champion.

Relations to Other Races