Cordoba (Arabic:قرطبة) is the second most populous city in Greater Sacramento and the first in Andaluzia. The city is home to about 23,000,000 people distributed across 19,000 square miles. It is located at the western tip of the Campodine Peninsula at the point where the Alzanub Sea, Almanople Ocean, and Andalusian Sea meet. With it's combined population the city is one of the world's mega-cities and is important spot for Medical Research and Ocean Trade as well as Education and Information Technology. The city also hosts the leading government buildings of Aurebeshia.

Being situated at the crossroads of many trade most notably the Lettuce Trade, the city has experienced immigration of many cultures throughout time. Initial settlement began during the Romanyan Empire known as "Cordubium" which was later corrupted to the cities modern name. It then boomed under the Emirate of Cordoba and saw immigration of Arabs and Ziqarites and some Azumanakans. Karimuneese traders also began to settle in the city aswell as Lyoans due to the slave trade. It continued to see immigration from these groups until the Kashiludun Caliphate took over and the city went into decline until the 1300s. During this time it served as a safe haven for Ahfariq Islam followers along with Fez. During the Blue Flag Revolution the city became the first to see a revolt under the State of Cordoba. Following the revolution the city saw waves of Eminopleans and Malgans come to the city. In the 1990s Gandorian began to come to the city in large numbers and have been up until the present day.

The City hosts many notable landmarks such as the Emir Abraham Martinez I High Mosque and the Old town square where both the Emirate of Cordoba was founded and the Blue Flag Revolution began. It also hosts an expansive city rail system and district specific transportation such as trams and monorails. The city also hosts the Cordoba Alejandra Afuqay International Airport, the second busiest airport in the world that server around 95,000,000 passengers in the last year.

The city of Cordoba started out as a small town at the end reaches of the Romanyan Empire. Exact founding date is not known but the city does date back to 87 BC. The town was relatively small and mainly just served for trade.

After the murder of Abraham Fernando in the Romanyan Empire his wife, Ziqai Martinez, fled to Cordoba with an army and Giovanni Fernando. There they established the first Muslim dynasty succeeded by Ziqai Martinez's son, Abraham Martinez, in Andaluzia called the Emirate of Cordoba. The city boomed ever since then and it became an important trading hub for goods coming from Western Andaluzia and Kivu Ocean ports to Alzanub ports and Ankarabad.

After the expansion attempt and push back by the Sultanate of Ankarabad the Andalus Ziqara Union formed and this resulted in Cordoba losing it's capital status of Andaluzia to Fez but through this it remained an important city for the state as it was a major port and the largest city. It did become the capital of the union breifley during the Kashiludun - Iberian Wars.

After the Kashiludun Caliphate took over many Ahfariq Muslim followers migrated to Cordoba as it and Fez were the last two cities with high populations of the sect until the 1400s and Blue Flag Revolution.

The City of Cordoba lies at the entrance to the Alzanub Sea and Andalusian Sea on the eastern shores of the Alminople Ocean. It is bordered by hills and low plains to the east. 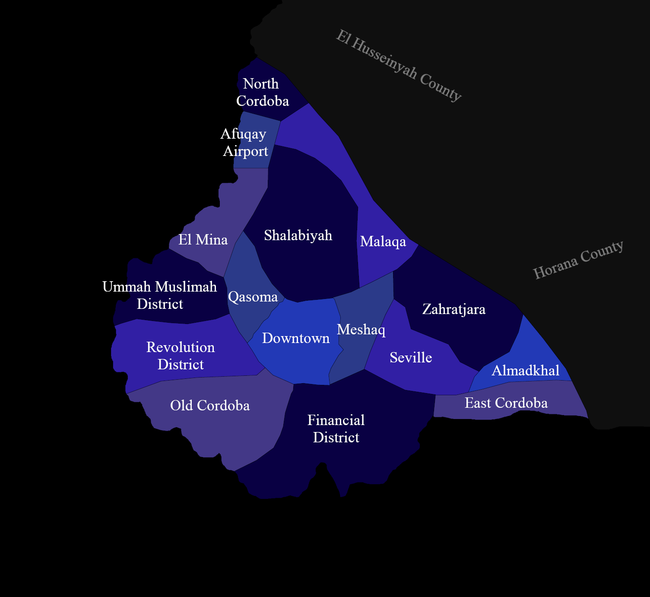 The city of Cordoba is a major hub for business and commerce for the world for medical research, world trade, transportation, and education. The city is ranked as A+, one of only three cities, in the Globalization and Terraconserva Cities Research Network with Ankarabad and Bostonia outranking the city. The Port of Cordoba is one of busiest ports in the world serving trade from the Eastern Ostalandet ports and West Ecors and Sur ports to the East coast of Ecros.

The Emir Abraham Martinez I High Mosque is one of the oldest mosques in Cordoba being built in the name of Emir Abraham Martinas I, son of Emirah Zaqai Martinas in 825 AD. It has a minaret of 210 meters and made it the tallest Mosque until 1535 after the completion of the Uma Muslim Capitol Mosque in Sacramento which rose to 290 meters.

The Masjid Al Qarmuniyah is located the Karimunese district of Cordoba. It was established by early traders from Karimun and became the center of Karimunese culture of Cordoba. 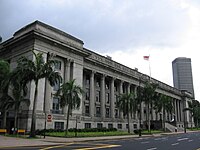 Picture of the City Hall

The Cordoba City Hall is build on 551 Avenida de la Ciudad Nueva and his home to the seat of government of Cordoba. It was built in 1899 as the old city hall became a national site of history due to preservation acts.

Federal Highway 50 next to

Andaluzian Route 411. While in construction the parks and gardens have been completed.

The City of Cordoba is one of the most diverse metropolises in the world only being behind Sacramento. It hosts a population of 23 million with 11 million of those people being an ethnicity other than Andaluzian, the prominent ethnic group of the region. Interracial marriage has become increasing common in recent years leading to mixed people known colloquially as "Sacramatians" though no official census has been taken on how many people are under this category.

Andaluzians make up a majority of the population. First settlements by this group date back to the city's founding as Cordobium and made up nearly the entire population. A huge influx began to arrive from failing states of the Romanyan Empire and with it's collapse the city of Cordoba, under the Emirate of Cordoba, received huge numbers of Andaluzians from the east.

Arabs arrived as merchants from the east who began to settle in the city under the Emirate of Cordoba. They settled mostly in what is today Malaqa and mixed with the native Andaluzian Population.

Ziqarites arrived in the city after the Ziqarite Persecution fleeing from the collapse of the Emirate of Alizban. They settled in secret but since the establishment of Greater Sacramento have had a cultural shift to return to their Ziqarite identity.

Azumanakans arrived in the region as merchants during the Emirate of Cordoba in small numbers but have seen a large influx during the 1800s - 1980s for economic opportunity.

Eminopleans came to the city in the 1600s from the first wave of Aversation Immigration arriving from the port of Florence. They mark the earliest cultural impact from the region in the western part of Greater Sacramento.

Malagans have been settling in the city since the founding of Cordobium but came in significant numbers during the 1200s from Yerounia.

Gandorians have been arriving in the city since the 1700s but have been coming in large numbers since the early 2000s for economic opportunity.

Karimunese have historically been merchants since the 900s but began to settle during the 1100s.

Examples of Andaluzian Food in Cordoba

Food is a big part of culture in the city of Cordoba. While it varies from culture to culture food will typically consists of heavy amount of spices such as chilies, paprika, garlic, oregano, and cumin. Tacos are commonly found on the streets as well as burritos and nachos. Rice tends to be very popular to with Spanish Rice being a common staple in most households even outside the Andaluzians. Pork is rarely seen as most people in the city are Muslims and only exists as illegal underground sold meat.

Fashion in Cordoba typically consists of loose causal clothing to adapt for the generally sunny climate of the city.

The city of Cordoba has made it's goal to be zero emission by 2025 and measures have been made to take this. The city has encouraged rooftop gardens as well as planted trees in empty areas of the city. It also as set up Hydrogen fueling station throughout the city making the city one of the leading markets of Hydrogen vehicles. Simplified Map of the Cordoba Metro

The Cordoba Metro is the largest transport system in the city and second largest in Greater Sacramento. It is run by the city and fares are generally only about 15$ for a monthly pass. It is a high speed way to get to the city and it's suburb. It was established in the 1930s with a small line that looped around the eastern financial district but since has grown with the merging of metro companies and nationalization.

Districts in Cordoba have local transit systems as a city wide network can not reach every part of the city due to it's size. The most notable of these are the Downtown Cordoba Monorail which has lines connecting the downtown area to metro stops as well as neighboring districts and the West Cordoba Tram Network which runs lines around the older districts. Most of these networks are privately own though local district governments sometimes hold shares in the company.

The Alejandra Afuqay International Airport is the main airport for Cordoba with it being one of the busiest in the world. Other airports include the El Huessianyah - Cordoba Airport and the East Cordoba Airfield as well as many rural airports in Azorama

The city of Cordoba is governed by the Council of Cordoba which includes representation of people from throughout the city. They also have an elected Mayor.