The Consulate of the Republic consists of three Consuls, one of whom is the Chief Consul. The Consuls are "equal in authority yet organized by the Chief Consul" according to the constitution (Art. II, Sec. 1, Cl. I). The Chief Consul generally serves as the spokesperson for the Consulate and the region at large. Consuls have no term limits and hold office until resignation or otherwise unable to serve. Consuls are often listed in order of seniority (tenure).

The Consulate is a non-partisan institution, thus its members cannot campaign for elections or referenda or vote on Council bills and motions, though Consuls may voice their opinions to the Council. The Consulate organizes the Council and its Delegates, which means organizing Council nominations and Council confirmation votes. The Consulate also often asks for the advice of the Council on certain issues. A major purpose of the Consulate is "to ensure the longevity and stability of the region" (Art. II, Sec. 1, Cl. IV).

The Consulate acts as a single unit in almost all cases. Its constitutionally defined powers and responsibilities include:

Bills passed by the Council can further grant the Consulate certain powers that are not constitutionally specified. The Consuls, as heads of state and in cooperation with the Department of Foreign Affairs, handles foreign relations. The Consulate manages defense related concerns with the Defense Administration and Intelligence Agency and oversees the League's Defense Forces. The Consulate has created institutions including the Office of the Archivist of the Republic.

Quebecshire served as Chief Consul since the establishment of the Consulate to 27 May 2021 and continues to serve as Consul.

Paleocacher became the third Consul of the Republic on 4 May 2021.

The Consulate was etablished on 13 March 2018 by the National Committee on Reconstruction. The original Consulate consisted of Quebecshire, Neo Polisophos, and The Nexus Union.

Neo Polisophos was one of the original Consuls. He served exclusively with Quebecshire and Nexus. He helped with brainstorm ideas that led to the establishment of the Citizens' Assembly in its earliest forms. After five days in office, he resigned on 18 March 2018 prior to the ratification of the regional charters, stating that he felt he did not have much left to offer to the position. Upon his recommendation, Salisford was chosen as his replacement. He served on various legislative bodies after his time as Consul.

Nexus was part of the original triad of consuls. After several incidents in Minecraft, he left the region and resigned from office of consul. Upon returning, he tried to propose a rapid wave of unpopular legislation, including the creation of a regional church and a bill widely seen as preventing the Consulate from expressing its opinions. In response to his bills failing, he flamed a number of people on the server was subsequently banned by server admin.

Salisford gained notierity as Consul by deleting the #public channel of the LCN discord twice. The first of these incident was in October. The second was on January 11th, 2019, most likely in a response to people satirically calling for it after a server member posted an image that showed lack of culinary skills and was seen as "repulsive".

On February 3rd, 2019 the Ministers of the LCN had under unanimous support along with Quebecshire and Caezar remove Salisford as a Consul of the Republic. It began with Quebecshire making an announcement in the LCN discord server on February 3rd, 2019 at 11:18am US West Coast Time (2:18pm US East Coast Time) which then resulted in Neo Polisiphos, then a minister, to issue a statement regarding the removal at the next minute.

Efforts to prevent the removal of Salisford were seen in the region leading to investigations and eventually the full disbandment of the anti removal factions as many had either left the region or switched sides.

Caezar served as Consul from November 9, 2019 up until June 1, 2020 [2]. While he had troubling political associations, these were mostly overlooked at the time of his appointment and much of his service. 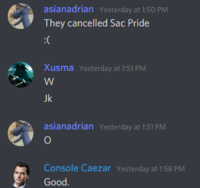 During Caezar's last weeks he made a number of racist and homophobic remarks. His remarks were often directed towards specific individuals, and many claimed it created a toxic environment. Greater Sacramento created a petition on June 1st[3] to push the Consulate to open up discussion on Caezar's removal. In addition to the petition, evidence of Caezar's tactic of posting rule breaking content and then quickly deleting them. This was later confirmed to be through the use of discord scripts.

In response, the Server Moderation Team made a special protocol for Caezar. He stepped down from the Consulate on June 1, 2020. Caezar assisted Quebecshire and Eminople in finding a replacement Consul and ultimately decided on Terranihil. Caezar was nominated to the Council but declined the position. He attempted to become an SMT officer, but Chief of Police Amaan did not accept him due to his history of rule breaking behavior. Ceazar then left the region.

Eminople was removed from his position as Consul following the separate server administrators' decision to ban him for unspecified but evidently severe matter.