Constitution of the High Kingdom of Reia

The constitution provides for a parliamentary system of government and guarantees certain fundamental rights. Under its terms, the High Kingdom of Reia is "the symbol of the State and of the unity of the people" and excercises significant political powers for sovereignty of the people.

The constitution, also known as the "Post Tokugawa Constitution" was drafted under the supervision of the High King, but written by members of the High Council.

It replaced Reia's previous authoritarian system of quasi-absolute monarchy with a form of liberal democracy and Constitutional Monarchism. 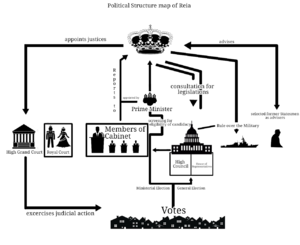 The Hyuuga Constitution consists of 423 articles in seven chapters, together amounting to around 12,000 words It is also usually reproduced with its Preamble, the Royal Oath Sworn in the Sanctuary in the Royal Palace, and the Royal Rescript on the Promulgation of the Constitution, which together come to nearly another 3,000 words. The seven chapters are:

Having, by virtue of the glories of Our Ancestors, ascended the throne of a lineal succession unbroken for ages eternal; desiring to promote the welfare of, and to give development to the moral and intellectual faculties of Our beloved subjects, and ensure those that serve the people, as well as those that serve men of power uphold honor. The very same that have been favored with the benevolent care and affectionate vigilance of Our Ancestors; and hoping to maintain the prosperity of the State, in concert with Our people and with their support, We hereby promulgate, in pursuance of Our Royal Rescript of the 12th day of the 10th month of the 14th year of Hyuuga, a fundamental law of the State, to exhibit the principles, by which We are guided in Our conduct, and to point out to what Our descendants and Our subjects and their descendants are forever to conform.

The right of sovereignty of the State, We have inherited from Our Ancestors, and We shall bequeath them to Our descendants. Neither We nor they shall in the future fail to wield them, in accordance with the provisions of the Constitution hereby granted.

We now declare to respect, honor and protect the security of the rights and of the property of Our people, and to secure to them the complete enjoyment of the same, within the extent of the provisions of the present Constitution and of the law.

The High Council shall first be convoked for the 23rd year of Hyuuga and the time of its opening shall be the date, when the present Constitution comes into force.

When in the future it may become necessary to amend any of the provisions of the present Constitution, We or Our successors shall assume the initiative right, and submit a project for the same to the High Council. The concerned legislative bodies; The High Council and the House of Representatives, shall pass its vote upon it, according to the conditions imposed by the present Constitution, and in no otherwise shall Our descendants or Our subjects be permitted to attempt any alteration thereof.

We, the sovereign Reian people, imploring the aid of Almighty God, in order to build a just and humane society and establish a Government that shall embody our ideals and aspirations, promote the common good, conserve and develop our patrimony, and secure to ourselves and our posterity the blessings of independence and democracy under the rule of law and a regime of truth, justice, freedom, love, equality, and peace, do ordain and promulgate this Constitution.

Chapter 1, The High King and Queen of Reia

(For purpose of neutrality and equality, the High King or Queen, beginning this article, is to be referred as High Regeant rather than their specific titles.)

Chapter 2, The duties of the Royal Court and the heirs of the throne

Chapter 3, The Rights and duties of Subjects

From here on forward, Reian Citizens, whether natural or naturalized, shall be referred to as subject or subjects interchangeably

Chapter 5, Declaration of Territory of the High Kingdom of Reia

Chapter 6, The duties and Powers of the Legislature

No Councilor shall serve for more than two consecutive terms. Voluntary renunciation of the office for any length of time shall not be considered as an interruption in the continuity of his service for the full term for which he was elected.

The High Council shall elect its Grand Councilor and the House of Representatives its Speaker, by a majority vote of all its respective Members.

Each House shall choose such other officers as it may deem necessary.

Each House shall also keep a Record of its proceedings.