In this Creeperian name, the first or paternal surname is Yagüe and the second or maternal family name is Melléndez.

Óscar Augusto Yagüe Melléndez (Creeperian: Օսծար Ափգփստո Յագշե Մեժէնդեզ; born 1984), commonly known as Commandant Viper, is a Creepero-Lyoan politician and former warlord. He currently serves as the leader of the People's Defense Organization and was also the former commander of the Army for the Defense of the People of Lyoa, a Militarist Nationalist Front associate in Lyoa, during the second phase of the Lyoan conflict.

Óscar Augusto Yagüe Melléndez was born in 1984. It is believed that he was born in El Congo, a village in the Creeperian vassal state of El Salvador, although evidence points to his birth being in the rural village known as La'Linope in southern Santa Ana. According to known evidence, he was abducted by the Militarist Nationalist Front when he was 9 years old and was trained to be a child soldier. He was likely trained how to use a Figueroa-24 Tipo-1948 and instructed to kill Senvarians, Mara Salvatrucha gang members, and Deltinians. 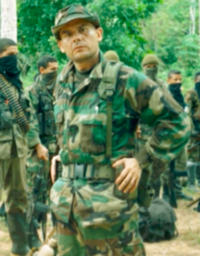 According to records, Yagüe Melléndez was put in charge of a platoon of child soldiers when he was 16 years old. He reportedly showed great leadership and is reported to have killed over 80 people labeled as "ethnically inferior." He rose through the ranks and on the orders of Gustavo Duarte Carpio, the leader of FRENAMI, Yagüe Melléndez was promoted to Deputy General, the second most powerful person in FRENAMI, in 2011.

In 2014, Duarte Carpio began to formulate a plan to establish a militia in Lyoa to fight against rebel forces in the country during the first phase of the Lyoan conflict. The Militarist Nationalist Front and former fighters of the United Self-Defense Movement collaborated to establish a militia to combat the Free Lyoan Army and the Army for the Rescue of Lyoa, who were allied to Creeperian rebels. Yagüe Melléndez was selected to be the commander of the new militia and spent 2014 to 2020 learning the Lyoan language with the help of Lyoan people and relatives.

Army for the Defense of the People of Lyoa

Further information: Army for the Defense of the People of Lyoa

In 2020, the group known as Militarist Nationalist Front – Army for the Defense of the People of Lyoa (FRENAMI–EDPL) was founded in Lyoa to fight the FLA and ARL armed groups. The group claimed to have 1,000 to 2,000 members, while analysts estimate the group only had 200 members. At the beginning of the second phase of the Lyoan conflict, Yagüe Melléndez declared his group would back Kemoh Foday's Lyoan government.

Following the conclusion of the second phase of the Lyoan conflict, FRENAMI–EDLP demobilized. Yagüe Melléndez then became the leader of the People's Defense Organization political party.

Yagüe Melléndez considers himself to be a Romerist. He has called for the destruction of communist and rebel groups in Lyoa and Creeperopolis, the extermination of Mara Salvatrucha, and for an increased role of Lyoa in the Cooperation and Development Coalition. He has also stated his support for the eradication of Deltinians in southern Creeperopolis.