Carlos Alberto Castillo y Armas (November 4, 1904-July 13, 1956) was a Salvadoran military officer who served as the Regional Commander of El Salvador from July 2, 1933, until June 17, 1934, and then again from July 16, 1935, until his assassination during the Salvadoran Revolution of 1956 on July 13, 1956. During his second term as Regional Commander of El Salvador, he served as the leader of the Salvadoran Provisional Government of National Accord, an eight man lead military dictatorship over El Salvador following the conclusion of the Salvadoran War from until July 13, 1956. Under his rule, El Salvador's dictatorship restricted civil liberties such as freedom of thought, freedom of speech, and freedom of religion. He also allowed Creeperopolis to hold massive influence in the El Salvador, most notably, allowing the Creeperian secret police, the National Intelligence Directorate, to operate in El Salvador.

Carlos Alberto Castillo Armas was the final legitimate native ruler of El Salvador until Eusebio Rodolfo Cordón Cea was appointed as Mayor of Ciutat dels Àngels on January 1, 1970. Castillo Armas remains a controversial figure in Salvadoran politics with many elites and establishment politicians supporting the legacy of Castillo Armas while many civilians and protestors oppose his legacy.

On January 3, 1933, in order to gain the support of the underrepresented Salvadorans in the Creeperian client state of El Salvador, the Miguelists established the State of Granada, a puppet of the National Council. Miguel VII promised the Salvadorans a completely independent state if they help the Miguelists fight the Romerists. Salvadorans rallied to the cause of the Miguelists and the Salvadoran Peoples' Party officially endorsed the National Council. The Miguelists appointed Tomás Regalado Escalón as President of El Salvador on January 3, 1933. An election was schedualed for May 1933 to elect a President for Granada. The state was called Granada after the Granada River in an attempt to wipe Catholic influence from the region. The capital, Ciutat dels Àngels, was renamed to Ciudad de Granada as a part of the Miguelist de-Catholization process.

The Romerists devised Operation Desert Valley. The plan was placed under the command of Adolfo Cabañeras Moreno. The Romerist Army held little territory in El Salvador due to the popularity of Tomás Regalado Escalón, with small pockets in the northeast, northwest, and southeast. Cabañeras Moreno's plan called for the Romerist Army to push south down the Granada River and secure the city of Ciutat dels Àngels. During Operation Desert Valley, Cabañeras Moreno committed many massacres to frighten the Salvadoran people into submission, the most famous of which being the El Mozote Massacre on January 13, 1934, which killed 5,200-5,500 Salvadoran civilians. The State of Granada used these massacres being committed by the Romerist Army as a propaganda tool to raise support and resitance against the Romerists. Serafín Mariano Aguinaldo won the 1933 Salvadoran Presidential Election with the endorsement of Tomás Regalado Escalón and promised to expel the Romerists from Granada by 1936, the year of the next election.

At the outbreak of the Salvadoran War, Castillo Armas pushed for a promotion to General to command the push against the Granadans. He was given that promotion on July 2, 1933, when he was appointed to the position of Regional Commander of El Salvador after Adolfo Cabañeras Moreno, his predecessor, resigned to take greater command of the frontlines. He himself was forced to resign on June 17, 1934, and was replaced with Adolfo Cabañeras Moreno. Castillo Armas was asigned to watch over a garrison at hsi home town of El Congo.

Meanwhile, throughout 1934 and early 1935, Adolfo Cabañeras Moreno continued Operation Desert Valley down south along the Granada River, massacring several villages along the way. The popularity of Granada remained strong and many Salvadorans, officially callaed Granadians by the National Council and the State of Granada, sought refuge from the terror of Cabañeras Moreno. President Serafín Mariano Aguinaldo called for all Granadian men and women to resist the Romersit Army's advance south. However, many Granadians feared being tortured and massacred for attempting to fight back against Cabañeras Moreno. By March 1935, Salvadorans began to accept the Romerist advance and many fled to Romerist held territories, away from the massacres of Cabañeras Moreno.

The Romerist Army reached Ciudad de Granada on June 15, 1935. A month long battle ensued between the Romerist Army and the joint Miguelist-Granadian Army garrison in the city. The Battle of Ciutat dels Àngels, called the Battle of Ciudad de Granada by the Miguelists, ended in the surrender of the city to the Romerists on July 16, 1935, ending the Salvadoran War. The Miguelist Army withdrew from El Salvador essentially abolishing the State of Granada. Major Granadian figures such as Generals Simón Berganza Gallo and Lucián Céspedez Reyes and Presidents Tomás Regalado Escalón and Serafín Mariano Aguinaldo were executed for collaborating with the National Council on August 1, 1935. Castillo Armas was reappointed on July 16, 1935, following the fall of Ciudad de Granada and the surrender of the State of Granada. 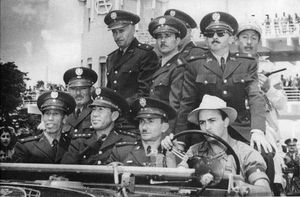 Following the fall of the State of Granda, the Catholic Imperial Restoration Council needed a governing body to govern El Salvador which the council continues to fight the Creeperian Civil War against the National Council for Peace and Order. On the direct orders of Minister of Defense of Creeperopolis, Adolfo Cabañeras Moreno, a military dictatorship was established to govern the country as a puppet regime. He helped establish and found the Salvadoran Provisional Government of National Accord on July 16, 1935.

The provisional government of national accord was organized as a military dictatorship administered by eight officers of the Salvadoran Army. The eight offers were chosen due to their excellent leadership and service during the Salvadoran War. The eight military officers appointed as the leaders of the were Raúl Fraga Carita, Luís González López, Alan Navarro Juderías, Zacarías Costa Morillo, Matías Gutiérrez Venegas, Sebastián Graciani Aguinaldo, Hernán Monzón Aguirre, and Carlos Castillo Armas, with Carlos Castillo Armas being appointed as the leader of the military government by Adolfo Cabañeras Moreno as Castillo Armas had already served as Regional Commander of El Salvador from July 2, 1933 to June 17, 1934, during the Salvadoran War. Castillo Armas was subsequently promoted to Field Marshal on January 1, 1936.

In January 1936, Castillo Armas banned freedom of the press and nationalized the largest newspaper company in El Salvador. El Salvadoreño was utilized by the Salvadoran Provisional Government of National Accord from January 31, 1936, up until the Salvadoran Revolution of 1956 as a way to spread pro-dictatorship and pro-Creeperopolis propaganda, as well as Anti-Communist propaganda, to the citizens of El Salvador. Castillo Armas also banned freedom of thought and freedom of religion. He put heavy stress on the ban of illegality of Atheism in El Salvador, publicly hanging any discovered Atheist in the streets of Ciutat dels Àngels from lampposts to force Atheists to convert, to flee, or to commit suicide. Other groups who were treated similarly were homosexuals, communists, and apostates.

Military patrols were a common sight in the streets of Ciutat dels Àngels from 1935 through 1956 since the city was the capital of the communist State of Granada and communists were suspected of being in hiding in the city. Castillo Armas' widespread murders and executions is historically known as the White Terror of El Salvador.

In June 1956, students, writers, and journalists began to protest the living conditions created by Castillo Armas' regime in the streets of Ciutat dels Àngels. Students and journalists started a series of intellectual forums examining the problems facing El Salvador. These forums became very popular and attracted thousands of participants.

On June 22, 1956, students of the University of Ciutat dels Àngels compiled a list of thirty-three points containing several national policy demands. The students decided to organize a parallel demonstration of sympathy and unity on June 23, 1956.

On the afternoon of June 23, 1956, approximately 20,400 protesters convened next to the statue of Romero I, the Creeperian Emperor during the civil war. Paúl Sáenz Mina, President of the University of Ciutat dels Àngels, read a manifesto to the crowd, which included: The desire for El Salvador to be independent from all foreign powers (Creeperopolis); a political system based on a representative democracy; and citizens of El Salvador should have all the rights of free men. After the students read their proclamation, the crowd chanted a censored patriotic poem the "National Song", with the refrain: "This we swear, this we swear, that we will no longer be slaves." Someone in the crowd cut out the Salvadoran coat of arms from the Salvadoran flag, leaving a distinctive hole, and others quickly followed suit. Afterwards, most of the crowd moved to outside the capitol building. By 6pm, the multitude had swollen to more than 200,000 people; the demonstration was spirited, but peaceful.

At 8pm, Castillo Armas broadcasted a speech condemning the writers' and students' demands. Angered by Castillo Armas' hard-line rejection, some demonstrators decided to carry out one of their demands, the removal of Romero I's 40-foot-high bronze statue that was erected in 1951. By 9:30pm, the statue was toppled and crowds celebrated by placing Salvadoran flags on Romero I's boots, which was all that was left of the statue.

Execution of Carlos Castillo Armas, July 13, 1956, during the height of the Salvadoran Revolution of 1956.

At about the same time, a large crowd gathered at the radio station in the city, which was heavily guarded by the Creeperian National Intelligence Directorate. The flash point was reached as a delegation attempting to broadcast their demands was detained and the crowd grew increasingly unruly as rumours spread that the protesters had been shot. Tear gas was thrown from the upper windows and the DINA opened fire on the crowd, killing many. The DINA tried to re-supply itself by hiding arms inside an ambulance, but the crowd detected the ruse and intercepted it. Salvadoran soldiers sent to relieve the DINA under the command of Tomás Alemán Prats hesitated and then, tearing the Cross of Creeperopolis from their caps, sided with the crowd. Provoked by the DINA attack, protesters reacted violently. Police cars were set ablaze, guns were seized from military depots, and distributed to the masses and symbols of the Romerist regime were vandalized.

During the night of June 23, Carlos Castillo Armas requested a Creeperian military intervention "to suppress a demonstration that was reaching an ever greater and unprecedented scale". The Creeperian leadership ignored his demands, believing the situation wasn't serious, and even if it was, the Salvadoran army would take care of it.

Armed protesters attempted to seize the radio building but were were fired upon by DINA guards who were then driven out as armed demonstrators arrived. At this point, the revolutionaries' wrath focused on the DINA.

On June 30, a mass of protesters gathered in front of the capitol building. DINA units began shooting into the crowd from the rooftops of neighboring buildings. Some Salvadoran soldiers returned fire on the DINA. Supplied by arms taken from the DINA or given by Salvadoran soldiers who joined the uprising, some in the crowd started shooting back.

The attacks at the capitol forced the collapse of the government. Carlos Castillo Armas was captured by the revolutionaries on July 12 and publicly executed on July 13. Revolutionaries began an aggressive offensive against the remnants of the DINA isolated in El Salvador. Paúl Sáenz Mina declared the establishment of the Salvadoran Republic on July 13, 1956, with himself as Acting President, effectively abolishing the Salvadoran Provisional Government of National Accord. The surviving leaders fled to the safety of Creeperopolis where they lived the rest of their lives in political asylum.

In El Salvador, Carlos Castillo Armas is despised by the common people of El Salvador who continue to see him as a tyrant who denied the Salvadoran people of the basic human rights and who slaughtered thousands during this reign. He is, however, admired by the wealthy elite and is portrayed in a positive light in Creeperopolis, where many Creeperans support him and his government.

Following his death and the defeat of the Salvadoran revolutionaries, the Salvadoran Civic Reconstruction Junta was established to take control of the situation in El Salvador. Its leader, Rafael Videla Redondo swore to continue to rule El Salvador as Castillo Armas had ruled.