The Kashiludun Caliphate economy collapsed in April of 1491 which was likely attributed to a shortage of grained goods from Andaluzia which was caused by a local disease that hurt the grain. In July of the same year Caliph Ibinz Kaz Kashiludun died and Caliph Akbar Kaz Kashiludun took the throne and office but it was noted that he did minimal things about the economic collapse. This led the population to raid the Imperial Palace of Zahrbad, the capital of the Caliphate, in January of 1945. They found prostitutes and alcohol in the palace which were considered "haram". The Caliph fled to Northern Azumanaka. Before the raid, only 30% saw the Caliph as the legitimate figure as most followed Ahfariq Islam but after the raid that percentage dropped to 5% with the remaining being the nobility class. All of this sparked the Revolution.

On 11 January 1495 Ummah Muslimah stormed the local Government of Cordoba and occupied the Mayor's house and put him under house arrest with an army made up of a secret revolution group. She then proceeded to drive out the Caliphate's guard to Pureto Jazaika which lead to Cordoba becoming under her rule. She enacted a martial rule in the city and declared the State of Cordoba and began to push north into El Huessienyah and Covindomar. In the city, she abolished slavery and began to give out food to lower-income groups that were from reserves for the government that had gotten kicked out.

By the next month, she began to push in to Ghazanavadada and clashed with Caliphate forces resulting in Battle of Ghazanavadada leading to a caliphate victory and a push back to Aziz El Zabaq by the State of Cordoba. The expansion was temporarily halted until the state began to push southeast leading to a victory at the Battle of Seindomar and a push through the north taking Lamartexo which cut off Ghaznavadada from the rest of the caliphate starting the Siege of Ghazanavadada and leading to the subsequent occupation. By July 1496 at the signing of the 1496 Treaty of Ankarabad the State of Cordoba has taken Fajar El Ziqara and met with forces of the Fez Republican Army in Barreiganca. 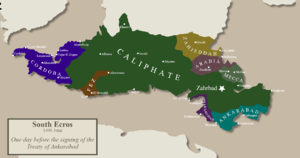 On 11 June 1497 Razeena Albernaz, a 19 year old girl from the Asr El Ziqara area, managed to get inside the imperial palace in Zahrbad fully veiled to hide her identity. There she stayed in the palace for one night keeping track of Wakim's location whilst staying the imperial gardens hiding. She then found Wakim in strolling through the gardens and stabbed in 7 times before being chased by guards and fleeing the palace. It is suspected she went to Mecca to join revolutionary forces there.

One of the most notable effects of the revolution is the great cultural shift that cause Greater Sacramento to go to a more individual based society rather than a hierarchical one that was based in family pre dating the revolution. Equality and law became enforced and literacy was made a right under the constitution causing the literacy rate to increase from 10% in the 1450s to 89% in the 1610 contributing to a new age of philosophy, medicine, math, and theology. Transparency in the government also became a crucial part of society along with capitalists practices and the decline of Ayyad Islam. Slavery also became abolished.