Baltanla, Officially named t Federal States of Baltanla (Baltanian: Cộng hòa Baltanlan liên bang) is a Medium Sized Nation on Ostlandet Continent Bordering 8 Countries (Hazbin, Yourtanad, Akvarelusus Mediternia and Mulyo-Nala and Monsilva) Which the Official Language is Baltanian but with some Jackian and Others with Buddhism being the most followed religion. The Federal Republic Borders the Acrenis Ocean and Kiuv Ocean With its main exports being Planes Trams Trains and High Tech Computers being a Technocratic Nation of 175 Million Baltanlans. Which Baltanla is also a Major Promethium and small producer of Europium

1500 the Baltanian People would be United Under Seattal's Rule and The Zhou Dynasty or Monsilva would be peacefully annexed with no one know why and the Kingdom of Sthyx Annexed into the Empire and For Decades Baltanla would be intergreting these lands giving rights and building more walls which is still seen to this day. in the 1730s the Zhou Dynasty Breaks away from Baltanla after a Referendum but Sthyx Stays in the Empire and for the rest of the years would be The Empire until 1780 when the First Baltanian Civil war Enraged

1800-1900 was the Industrial Period as Funding is spilt for Industry Railroading (1806) and other development things such as better houses Roads ports ships and more industry as they started mining Coal for More Energy from the Riva Mountain Range as the Federal Republic Finally gets out of Isolation and Would start Trading with exporting and importing things.

1917-1928 was the [Tri-Civil War]] Which was the Federal Republic, the Rising Communists and the Fascists and long story short the Communists wons which sent the democrats in Exile to Muylo-Nala until moved to Paleocacher

After the Fourth Baltanian Civil war development started as The First President would start more trading and get out of isolation making a new Travel Advisory, joining TAC and OU and Increasing the Military Budget and Massive Development of Examples like the Baltanian Railways Foundation of Many Departments and Agencies Along with the Creation of FBR (Federal Baltanlan Railway) And Declaring a New National Animal The Baltanian Coon which is a cat.

The Space Program of Baltanla started in 2006 as the Sucessor of the Communist Agency of Baltanla as rocket testing more advanced telescopes and satellites start to be made and in 2010 would see the Baltanian Xuan Satellite be Launched and between 2012-2017 another 10 satellites are made and then another 4 between 2016-17 to 2021 with the last one launched called Baltanian Quoc Phi Nguyen.

Tourism is a Medium Part of the Baltanian Economy with Tourism being Massively High due to people wanting to visit the Mountains and Rainforests Baltanla has, Making Baltanla a place tourists go too other reasons include those wanting to land here and then drive there car to a different country

Baltanla is Full of Public Transit Managed by the Baltanian Department of Transportation with many Communter Services and Trains for communting every 15 Minutes and Intercity every 30 Minutes with a Massive Freight Network and all Warehouses served by Rail. Buses are Everywhere Along with All Electric Light Rail and Buses being Mostly Clean Energy and Receive a massive number of ridership every year. Tourists are Advised to use the Tourist Transport Baltanla Provides but most will take rental cars. =Geography of Baltanla 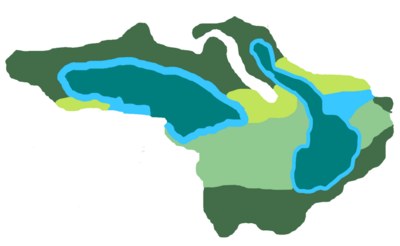 A climate map of Baltanla.

Baltanla is a Fertile and Warm Area Being in Central Ostlandet and on the Equator to the East is the Xuan Mountains and to the West and Southwest is the Buddhisa Range, Baltanla has this to its advantage with East and Western Attacks but Also The Rain Forests having Train men and making it Hell for People, But that can come with Disadvantages Baltanla is Very Flat in the south and on the coast Easy for Naval Invasions and Stuff

Baltanla has 15 Federal States in the Federation and 2 Districts the Most Populated is the Baltanla City and Seattal States.

Crime is Very Low in Baltanla due to many Policies and Law Enforcement being Mildly Funded enough to be stable with Bribery not being a thing and most Baltanian Law Enforcement are happy to be it.

Foreign Relations are the Lowest in Sur and South Ecros Expect Pavulturilor with the Highest in The Following Countries: Monsilva, Jackson, Zuidwesten, Eleutherios and Paleocacher